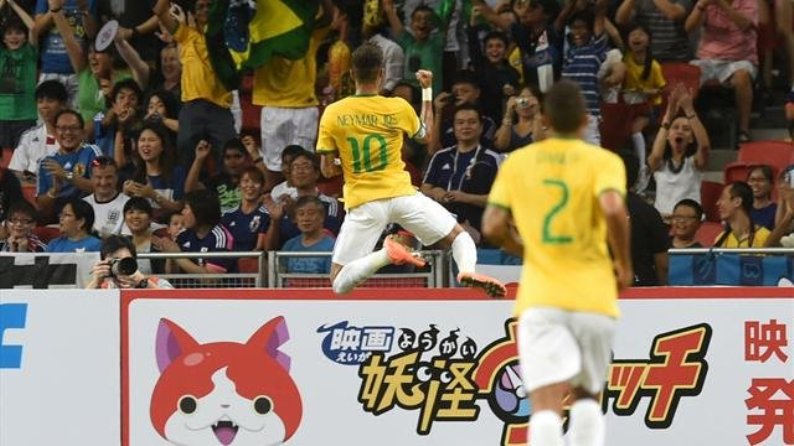 With their homeland battered by typhoons in recent weeks, Japan’s footballers face a crisis of confidence ahead of their Asian Cup defence after Neymar stormed through them in Singapore.

Neymar scored all four Brazil goals in Wednesday’s 4-0 rout of Japan on a Singapore pitch which resembled Rio’s Copacabana beach in places — and may have spared Javier Aguirre’s side further punishment.

The Sports Nippon newspaper stuck the boot into Aguirre for tinkering with his side, asking the Mexican: “What was the point of these tests?”

While Japan could be forgiven a ninth defeat in 11 meetings against the five-times World Cup winners, the Blue Samurai will hardly strike fear into opponents at the Asian Cup in January on current form.

“This is the reality,” talisman Keisuke Honda sniffed after the game, his forlorn expression all too familiar to Japanese fans following the team’s World Cup flop.

“There’s a huge gap. We get properly beaten (by Brazil) every time. There is always someone better than you.”

Japan have shown very few signs of improvement in four games under Aguirre, their only win an unconvincing 1-0 victory over Jamaica last week courtesy of an own goal.

“The players didn’t let their guard down against the best players in the world,” insisted the former Espanyol manager, who made six changes to his starting line-up, dropping Honda and Yuto Nagatomo to the bench, even though Shinji Kagawa had pulled out of the squad with a head trauma.

“I wanted to see if the players had what it takes to perform at such an important tournament as theAsian Cup, where Japan has a responsibility to do well. I discovered a lot of conclusions.”

Aguirre, who led Mexico to the last 16 of the World Cup in 2002 and 2010, has two games next month to reverse Japan’s alarming form before they fly to Australia in the new year.

The 55-year-old, on a record salary for Japan at an estimated $2.45 million a year, has so far failed to live up to his reputation since replacing Italian Alberto Zaccheroni following the World Cup. Failure at theAsian Cup could trigger an early release from his contract.

Japan have lacked end product in attack while their defending was shambolic in Aguirre’s first two games, a 2-0 defeat by Uruguay in Sapporo and a 2-2 draw with Venezuela in Yokohama.

Striker Shinji Okazaki accused Japan’s defenders of being star-struck by Neymar in Singapore.

“We didn’t even have a player who would go in and take him out,” he told the Nikkan Sports. “It’s going to be tough if you’re just watching him do his thing.” – Agence France-Presse