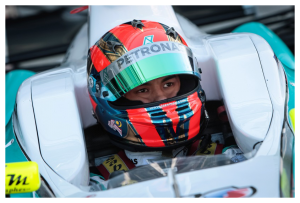 Jazeman Jaafar travels to Spain this week for the second round of the Formula Renault 3.5 Series, which takes place at Motorland Aragon circuit in Alcaniz. The 21-year-old driver is competing in his second season of the championship, driving with ISR Racing.

Jazeman’s first outing of the year at Monza produced a seventh place finish in the second race after the Malaysian driver had retired from the first race when he was the innocent victim in an early race incident.

Motorland Aragon is a familiar track for Jazeman and all the Formula Renault 3.5 Series drivers, as the championship held the first test of the year at this circuit in February.

It was Jazeman’s first test with ISR Racing, with a move of team for the 2014 season, and he had a very strong three days of running at the Spanish track.

“Monza was a mixed weekend for me, with high points, such as a strong qualifying session for the second race, tinged with lows, such as being unnecessarily taken out of the first race by a rival. I’ve put this behind me now and go into the weekend totally determined to be running up the front with strong performances in both races,” said Jazeman.

“My aim is to be finishing the weekend with a good haul of points” adds Jazeman. “I need to be leaving the track higher up the drivers’ championship leader board and making sure I’m in the mix with the other championship contenders”.

The circuit was designed by illustrious Formula 1 race track designer Hermann Tilke and in 2009 began hosting the World Series by Renault with its headline championship Formula Renault 3.5 Series, the first international championship to be held at the venue.  It also hosts rounds of the MotoGP and Superbike World Championship.

This year’s Formula Renault 3.5 Series race weekend starts on Friday with two practice sessions, continues on Saturday with qualifying in the morning at 10.20am local time and the first race at 14.30. On Sunday qualifying for the second race starts at 10.05 and the second race begins at 14.00. The races will be shown live on Eurosport in Europe.