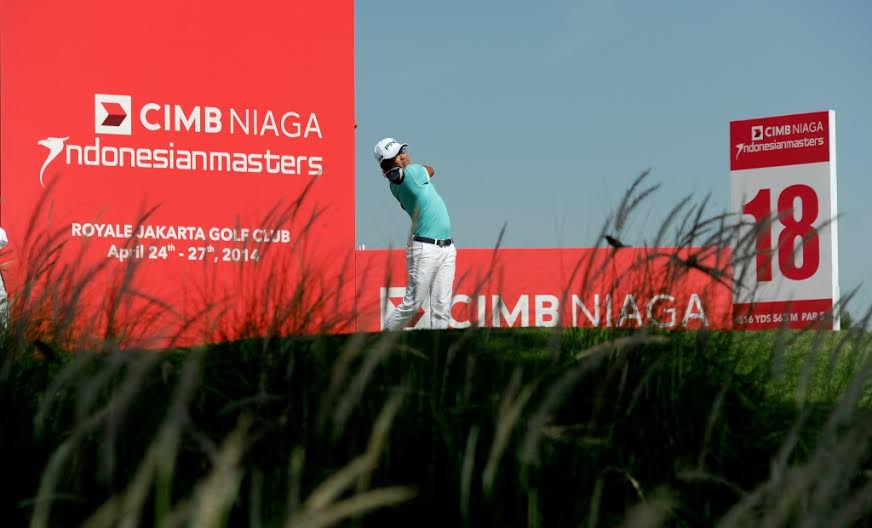 Malaysia’s Nicholas Fung continued his dazzling form by taking a share of the first round lead with Korean-American Anthony Kang who surprised even himself with an opening five-under-par 67 at the US$750,000 CIMB Niaga Indonesian Masters on Thursday.

Still riding high on the EurAsia Cup euphoria where Team Asia battled to an epic draw with Team Europe last month, Fung is putting his experience of playing against the world’s best players to good use at the Royale Jakarta Golf Club.

“It’s nice to see my name on the leaderboard. I made the cut in Malaysia for the first time last week and that gave me a huge confidence boost. Of course, the experience from EurAsia Cup has helped me as well. Playing with Jamie Donaldson and Graeme McDowell and Miguel Angel Jimenez at the EurAsia Cup has taught me a lot. I’ve learned to be patient with my game, try to calm down and always stay positive,” said Fung.

The Malaysian held his own and emerged as the best player in the morning’s marquee group which included 2013 Asian Tour Order of Merit champion Kiradech Aphibarnrat (71) of Thailand and Major winner Louis Oosthuizen of South Africa (72).

“It’s great playing with Asian Tour Order of Merit winner, Kiradech Aphibarnrat and Louis Oosthuizen. I started very well today when I was three-under after five holes. It was all good for me out there today and I’m feeling very confident,” said Fung.

Evergreen Kang, who does not look a day older than his 41 years of age, sprung a big surprise when he made his presence felt atop the leaderboard.

Kang’s last victory on the region’s premier Tour dates back to 2009 when he won his third title in Malaysia.

While he may not be at the peak of his career today, Kang is happy he can still put up a good showing at the CIMB Niaga Indonesian Masters.

“I surprised even myself with such a good score. You know, I’m getting old and I’m just enjoying my time on the golf course nowadays.

But today’s score shows that I still have the talent to play good golf. It’s a positive start and hopefully I can continue to play that way I did today,” said Kang.

Meanwhile Wiesberger was largely out of the radar when he reached the turn with an outward 35.

However he showed never to be underestimated when he got his game back on track with another birdie on 13 before finishing with two birdies in his closing three holes.

“I didn’t take several chances early in the round but it was a good finish especially with my birdies on 16 and 17,” said Wiesberger.

The Austrian is determined to put up a strong defence of his title and he believes the weather conditions will be in his favour when he tees off early for his second round.

“I’ve been looking forward since Sunday last year to come back and defend my title. This is a golf course which I really like and can play well here.

Chapchai’s decision to change a new putter has paid off.

After missing the cut in his last two events in the Philippines and Malaysia, the Thai got back into the mix by firing six birdies against two bogeys to stay within sight of the leaders.

“I changed my putter recently and the results have paid off today. I haven’t been putting that well recently and I thought it’s time for a change. It showed today as I managed to hole several long putts and that has brought back lots of confidence,” said Chapchai.

Leading scores after round 1 of the CIMB NIAGA Indonesian Masters being played at the par 72, 7340 Yards Royale Jakarta GC course (a- denotes amateur):