Home 2022 Jeddah joy for Azcona, Berthon and Magnus as chequered flag waves with... 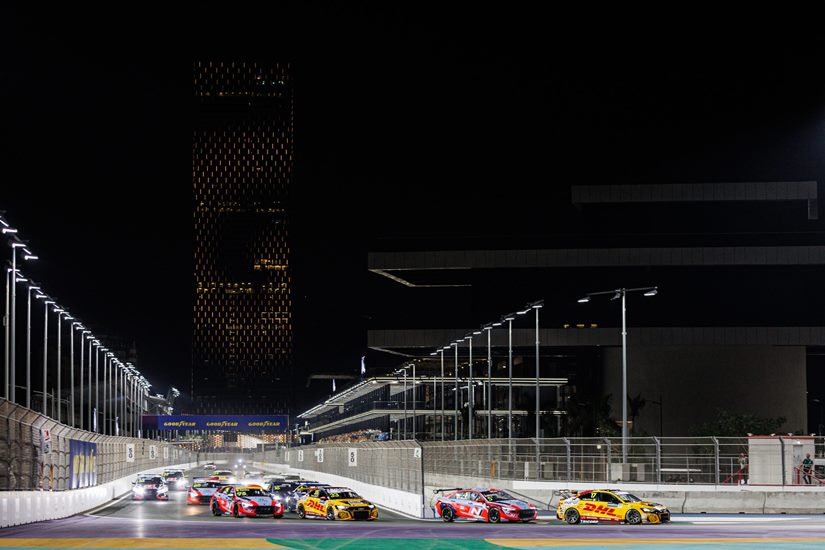 Wins for Nathanaël Berthon and Gilles Magnus and a first King of WTCR crown for Mikel Azcona* marked the completion of the all-action WTCR − FIA World Touring Car Cup in its current format after five seasons at Jeddah Corniche Circuit in Saudi Arabia tonight.

Berthon claimed the Race 1 honours on the spectacular street circuit, with Magnus, Berthon’s Audi-powered Comtoyou team-mate, taking the chequered flag first in Race 2 as Tom Coronel and Rob Huff shared the wins in the WTCR Trophy for independent racers.

With the Red Sea shoreline providing a stunning backdrop, the spectacular floodlit races provided a fitting finale to the WTCR’s Middle East double-header, which began in Bahrain earlier this month, and gave the opportunity for the drivers and their Goodyear-supplied teams to sign-off on the 2022 season in style.

Kicking off on the streets of Pau in France back in May, the chase for this year’s WTCR titles also included stops in Germany, Hungary, Spain, Portugal, Italy, France’s Alsace GrandEst region and Bahrain prior to the season decider in Saudi Arabia.

With an advantage of 60 points prior to WTCR Race of Saudi Arabia, Azcona’s title was all but assured and he put the big prize beyond Néstor Girolami’s reach with the second fastest time in Saturday Qualifying on a night when BRC Hyundai N Squadra Corse earned the WTCR − FIA World Touring Car Cup for Teams for the first time.

A strong campaign ensured Rob Huff was the winner of the WTCR Trophy for independent racers at the completion of the European season.

As well as wins for Berthon and Magnus, there were notable performances in Jeddah from Norbert Michelisz and Tom Coronel, who completed the Race 1 podium. North Macedonian wildcard Viktor Davidovski also excelled by beating Mikel Azcona to second place in Race 2. Saudi Arabian wildcard Ahmed Bin Khanen finished P12 and P10 in a Comtoyou Racing-run Audi.

RACE 1: Nathanaël Berthon (FRA) Comtoyou DHL Team Audi Sport, Audi RS 3 LMS
“Norbi [Michelisz] was not doing any mistakes, he was putting me under pressure until the end. The race was very long, 26 or 27 laps with a safety car. It was a lot of pressure, so I had to be… with one mistake he would have overtaken me. Wow, very happy with this win for the team of course. They did an amazing job, my crew, Comtoyou, Audi Sport. Congrats to Norbi, he was very fair all the race, so thanks for that. Always a good competitor. And of course my Tommy, he was right behind and I knew he was there to help me. I’m super-happy for him and that we are together on the podium for the last one, the last dance of the season. Let’s see next year but very happy.”

RACE 2: Gilles Magnus (BEL) Comtoyou Team Audi Sport, Audi RS 3 LMS
“This is the way I want to thank Comtoyou. I’m really sorry about Nath [Berthon]. I would have liked to see him in P2 in the standings. But this is the way to thank Comtoyou, and I’m so, so happy I cannot describe it. It was a really emotional moment when I crossed the line. When I knew we were going to finish behind the safety car it was really emotional. Although I’ve had bigger victories than this one this is really emotional because of everything that has happened before. Really happy to end this way, thanks to Comtoyou, thanks for all the long night they have done in Bahrain and I’m very happy. I was suffering, even more in Race 1 than in Race 2. Maybe this was the toughest race this season. Really happy it wa by night because if it was by day I’m not really sure I would have made it to the end. It was really tough. I was sorry for Franco that he made the mistake. We all make mistakes, I made one myself in Bahrain, so I was sorry for him. At the same time it really opened the field up for me, so these kind of things happen. It’s racing.”