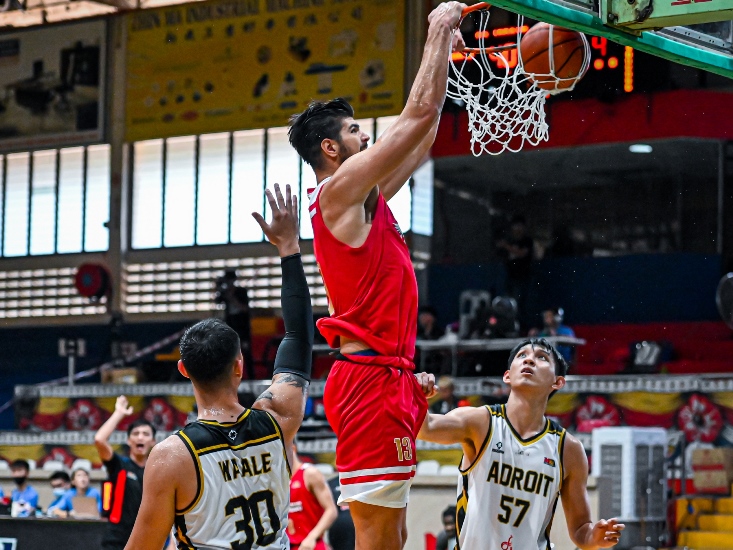 NS Matrix took a 39-36 lead at the half. Johor blasted NS Matrix with a 19-1 run in the fourth quarter as the visitor’s offense ran cold, failing to score a field goal in the first six minutes of the quarter.

Johor’s amazing run proved too much for NS Matrix to come back from as Johor sent the homecourt crowd home happy with the massive 23-point win.

For his impressive homecourt performance, the Johor-born guard Heng Yee Tong was named Player Of The Game, finishing with 18 points (4 three-pointers), 3 rebounds and 4 assists.

It was an uncharacteristic fourth quarter meltdown for NS Matrix in a game where they struggled against Johor’s quick hands, committing 31 turnovers that gave them 38 points. Although Ting Chun Hong had 21 points, he won’t be happy with his 8 turnovers.

An undermanned Singapore Adroit rose against all odds to defeat Pegasus Sports 93-82.

The game saw a disruption with a minute to go as Poh Wei Hao took out his frustrations on the game official after receiving his second unsportsmanlike foul.The game resumed with no further dramas as Adroit secured their third win of the season to put them firmly in playoffs contention.

Adroit’s Player Of The Game was once again Moses Morgan who scored a season high 35 points and grabbed 18 rebounds. The Thai-American’s timely baskets were crucial in holding off Pegasus’s comeback efforts.

It was another frustrating day for Pegasus as they fell to their third straight loss. Their top performer was Ryan Smith with 22 points, 23 rebounds and 4 assists.

Sunrise Youngsters were the winners of a thrilling encounter against KL Aseel as the Penangites wrote off KL Aseel’s comeback story and took the 88-83 win.

The Player Of The Game was Jayson Lee Shu Wen. The 23 year old Penang born guard was on fire today, dropping 28 points including five three pointers. KL Aseel fell to their fourth straight loss, their best player was Jai Reyes with 18 points and a season high 10 assists.