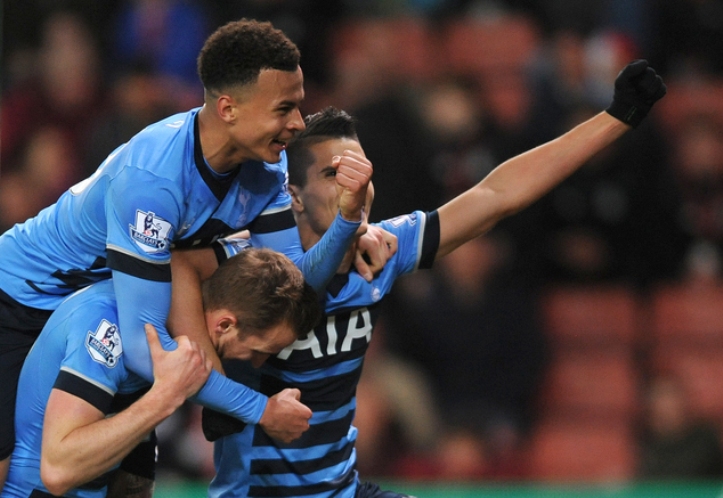 Spurs have just four more games to try and wipe out the deficit and claim their first league championship since they did the ‘Double’ in 1961.

Time may be against them but Mauricio Pochettino’s side made sure they maintained their pursuit of the Foxes with a fourth win in five league games.

Kane’s 26th goal of the season in all competitions set up a clinical victory, with the 22-year-old adding another to his tally in the second half in between two from England colleague Alli, who took his total for the campaign into double figures.

With Leicester dropping two points in their dramatic 2-2 draw against West Ham on Sunday and then learning on Monday that top scorer Jamie Vardy faces an increased ban for his sending off following a charge of improper conduct from the Football Association, Tottenham had the chance to really pile the pressure on the table-toppers with victory at the Britannia Stadium.

The north London side wasted no time in seizing the initiative in a breathless start which forced Stoke, who had previously not lost at home to any of the league’s other top-five clubs this season, onto the back foot.

Veteran goalkeeper Shay Given, making his league debut two days before his 40th birthday, saved with his legs from Kane but with nine minutes gone was powerless to stop the Tottenham talisman putting his side ahead.

It was another special goal from Kane, who cut in from near the left touchline before curling a shot around Given and into the far corner to go clear of Vardy in the race to become the top-flight’s leading scorer with his 23rd league goal of the season and fifth in his last six games.

Tottenham, beaten away from home just once since the opening day of the season, already looked as though they would take some stopping as their supporters noisily told Leicester “we’re coming for you”.

Stoke, needing eight more points to surpass the 54 they managed in setting a new Premier League best last season, did stem the tide for a spell and threatened themselves as fit-again top scorer Marko Arnautovic stung the palms of Hugo Lloris and then headed just wide.

Bojan Krkic also volleyed over the bar but Tottenham should have been 2-0 up at half-time and well on their way to another crucial victory.

Again Kane was involved, this time as a creator as his flick left Christian Eriksen with a clear run on goal which the Dane wasted with a finish that clipped the top of the crossbar.

Alli was next to miss a chance for the visitors, firing over the top 10 minutes into the second half as Spurs continued to impress and pose problems with their movement and slick passing.

But those wasted chances were rendered irrelevant as Spurs snuffed out any remote chance of a Stoke fightback with two goals in the space of five minutes.

Alli continued his stellar season as he made it 2-0, coolly clipping the ball over Given after being released by Eriksen in the 67th minute.

The 20-year-old then endured the embarrassment of missing an open goal as he sent his angled shot against the post after rounding the Stoke keeper.

But that proved to be Tottenham’s only blemish on a potentially pivotal night as they cut Stoke’s defence open again for Kane to side-foot home the third after Eric Lamela had rolled the ball into his path.

It was close to exhibition stuff from the nerveless visitors who added a fourth goal eight minutes from the end, Alli volleying in Eriksen’s cross, to ensure a thrilling title race still has some way to run. – Agence France-Presse