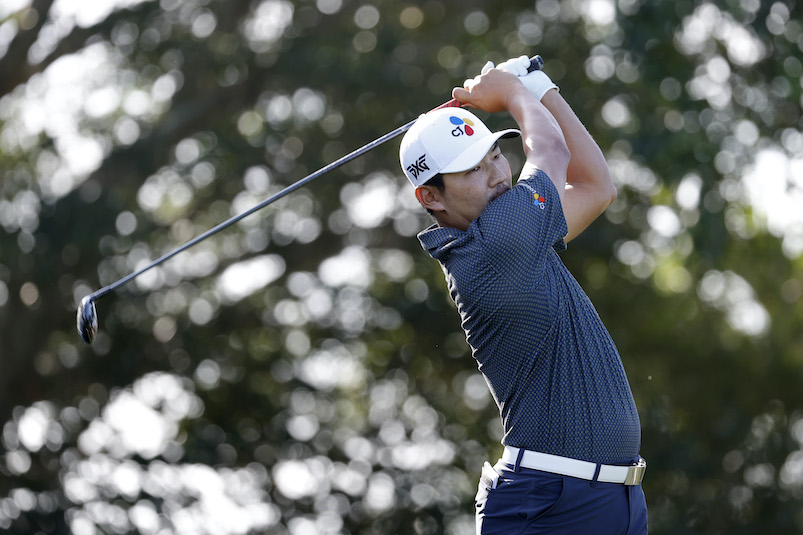 Korea’s Sung Kang used a putting tip from Pat Perez to fire his low round of the year with an impressive 6-under 66 for tied second place at the Valero Texas Open on Thursday.

It marked a strong opening day for the Korean contingent as Seung-yul Noh also returned his best round of 2021 with a first round 67 to share fourth place at TPC San Antonio, Texas while K.H. Lee carded a 70 for T13. Colombian Camillo Villegas, a four-time PGA TOUR winner, shot a sizzling 64 to grab a two-shot lead, with Jordan Spieth and Hideki Matsuyama amongst those in the chasing pack on 67s.

An eagle on the second hole from 30 feet was Kang’s highlight as he finally found his range on the greens, thanks to advice from three-time winner, Perez. “I was on the putting green yesterday and then Pat came up and helped me out a little bit. I made a lot of putts today. I’ve really got to say thanks to Pat because I had a great round,” said Kang.

A one-time winner on TOUR, Kang’s form has been dismal following 10 missed cuts, including in his last three tournaments, from 16 starts this season. His last top-10 was a T2 at the Genesis Invitational in February 2020. After entering the week ranked a lowly 197th in Strokes Gained: Putting, the 33-year-old rolled the ball beautifully with his flat stick to snare five other birdies, and ranked third in the stat category in the first round.

“He told me I was choking down too much with the putter so I wasn’t using the weight of the putter head. He got me to grip it on the grip-end and then I can feel more of the weight of the head and release it better. It’s going to move more naturally and it felt great. Since then, my speed got a lot better and I was rolling it nicely,” said Kang.

Noh who took a break from TOUR in 2018 and 2019 to serve his mandatory two-year military commitment in Korea, showed some of his old form which made him Asia’s youngest No. 1 in 2010 and a PGA TOUR winner in 2014 when he won the Zurich Classic of New Orleans.

Like Kang, he credited recent advice from veteran Korean star K.J. Choi for his good start, which featured six birdies against a lone bogey. Noh holed a 26-footer on the sixth hole for his longest birdie of the round.

“After the military service, I really struggled when I came back on TOUR. I struggled to start off the season, but finally played really well today,” said the 29-year-old, who has missed the cut in his four starts in 2021.

“I talked to K.J. in Pebble (Beach) and I then changed my ball flight and shape a little bit. I used to hit the right to left draw shot mostly and now I’m hitting left to right, totally the opposite. In the past two months, I’ve gotten pretty used to my eye now and really feel comfortable with the left to right shape. And my putting was also pretty good,” said Noh, who ranked first in Strokes Gained: Putting on Thursday.

“K.J. was saying if you’re looking for a great future or to become a better player, you should try different things like technically or mentally. I just trust K.J. because when he is playing good, he plays like that.”

Matsuyama, who holds five PGA TOUR titles and seeking a first win since August 2017, put himself in contention in his debut appearance at the Valero Texas Open. He has notched seven top-25s this season but hopes to be the last man standing this week.

“It’s been a while. It was really fun to play well again. First time I’ve played here. It’s a difficult course. Being the first time, maybe that helped and I did play well  I just think my overall game was really good,” he said.