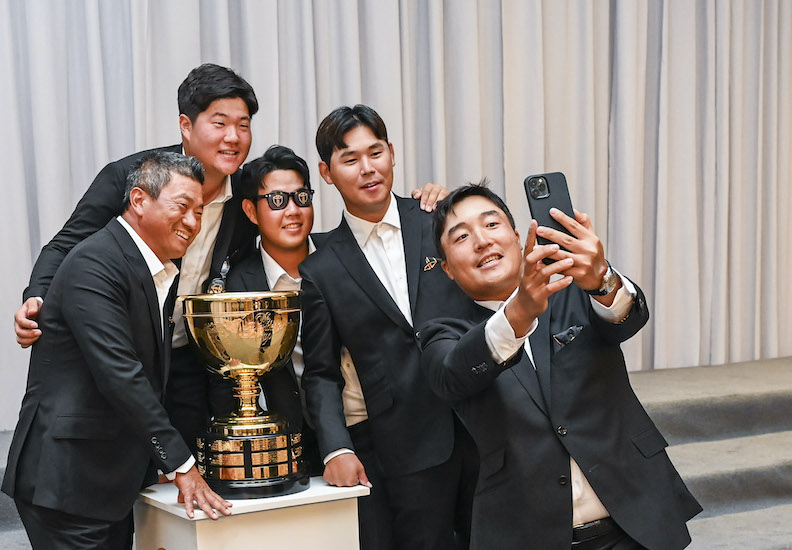 Korea’s K.J. Choi has been walking with a spring in his step and wearing a big smile since arriving at Quail Hollow Club for this week’s Presidents Cup.

A trailblazer for Asian golf, the 52-year-old Choi, who is one of four assistants to International Team captain Trevor Immelman, is simply proud of the fact the team which will face the United States starting Thursday will feature a record four Korean players, and matches the five Asians who competed at Royal Melbourne in 2019.

When Choi arrived in the U.S. in late 1999, he was the first Korean to earn a PGA TOUR card through Qualifying School and some 20-plus years later, the number of Koreans, and Asian golfers, has grown immensely with an array of champions emerging as well.

K.H. Lee, who will make his Presidents Cup debut this week, led the tributes by acknowledging Choi paved the way for him and fellow International teammates Sungjae Im, Si Woo Kim and Tom Kim. Choi owns a record-tying eight PGA TOUR titles, with his most significant triumph being the 2011 PLAYERS Championship.

“When I was growing up, he was on the PGA TOUR … kind of a legendary figure, almost a mystical figure. He’s somebody we definitely looked up to. He’s opened the door for us to be here,” said Lee, who is a two-time TOUR winner.

“As soon as I got to the PGA TOUR, he took all of us under his wing. He became a big brother figure, he’s had a really good impact. I remember him telling me I have a lot of years ahead, and just to really think of the long term and put in the hard work, do your thing and good things will happen.”

Si Woo Kim, a three-time winner, added: “K.J. is the first one and then Y.E. Yang, and we’re trying to follow them. K.J. was one of my idols. So when I came here, I played a lot of practice rounds with him and have dinner with him. It was like a dream come true.

“Now, it’s like everyone’s tried to get on TOUR. I think we keep getting many players to come out here. We have very good players, so it’s very good to have a lot of the same country players on TOUR.”

Kim gave an example of how Choi helped him emulate the latter’s triumph at the TOUR’s flagship event. “In the 2017 PLAYERS, that week before the first day, we played a practice round together and he gave me some tips of that course (and Kim won). He’s always trying to help Korean players,” said Kim, who will make his second Presidents Cup appearance this week.

Aside from the Korean quartet at Quial Hollow, Japanese star Hideki Matsuyama, who holds eight victories on the PGA TOUR, will make his fifth successive appearance.

The new 2022-23 PGA TOUR season will also see Byeong Hun An, who was an International Team member in 2019, returning to TOUR after spending one season on the Korn Ferry Tour, while newcomer S.H. Kim graduated from the Korn Ferry Tour and will compete against the stars as well. Then, there are also Chinese Taipei’s C.T. Pan, who also played in Royal Melbourne three years ago, and Kevin Yu flying the Asian flag.

Lee said: “It shows the growth of Korean golf and I’m proud of that. The reason why we’ve had the success is we’re able to lean on each other, and obviously the familiarity between the players, it’ll just help us to grow and help us stay out here.”

Choi, who has three Presidents Cup appearances, couldn’t be more proud of the rise of Asian golf in recent times. He recalled the challenges he faced being the country’s sole representative competing against the best golfers on the planet.

“Four (Korean) guys are fantastic. 2003, it was just me in South Africa (for the Presidents Cup), very difficult. Now we’re chatting together in practice and (sharing) information and everything together,” said Choi.

“25 years ago, many Korean people go to America, and they can’t beat anybody. English is so bad, and hitting the ball is not too good. Now it’s the mindset, okay, K.J., he did it. We can go. It’s possible. Now they’re practicing. Many follow me and have more information, more technique, more strength in the body, better than me. I’m very proud of the younger players. I love it. The future is better players are coming.”