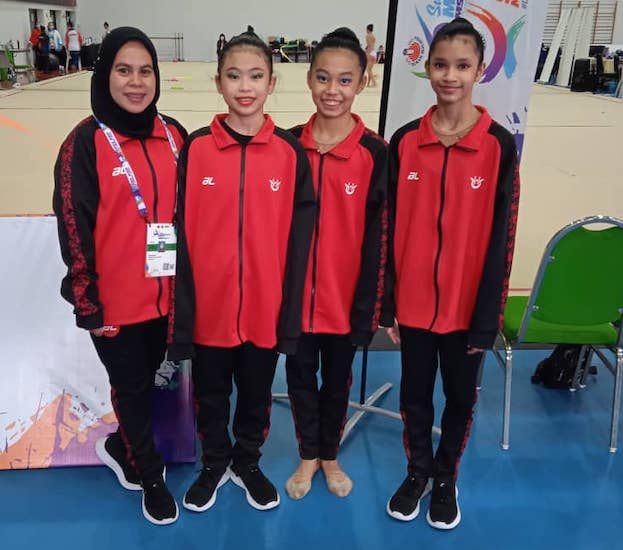 Kelantan may not have a proper hall designated for rhythmic gymnasts to train, unlike the artistic teams, but nothing stops the state from developing a talented pool of athletes.

The east coast state can take pride in Nik Danisha Nik Saharuddin, Tan Yee Shin, Chee Jia Eng and Shakira Eleina Shukri who have been performing outstandingly in the individual apparatus and overall team in the Malaysia Games.

“I am enjoying competing in the Games for the first time with my teammates. I am very happy with my performance in the individual apparatus, and I hope as a team we will do well overall to win a medal. If we don’t, there is always another day,” said Nik Danisha.

The success of Kelantan rhythmic gymnastics is purely due to the efforts of the Kelantan chapter of the National Sports Council and the dedication of NSC coach Aniza Wati and her assistants.

Nik Danisha, 13, is among the crème de la crème in the Kelantan team.

She started training under Aniza from the age of seven until 10 when she was a student of SRJK {C} in Kota Bharu, and at age 11 her parents enrolled her at SMK Bukit Bintang in Kuala Lumpur – all for the love of seeing their daughter get the right exposure and excel in the sport.

But Nik Danisha will continue representing Kelantan in major events.

In Kuala Lumpur, she represented Ria Club at the Singapore Open and won gold medals in hoop and clubs, and silver medals in ribbon and ball.

Her winning ways continued at the National Junior championships with
gold in ribbon and ball.

“From the age of 10-11 her parents will drive her to KL for training (Thursdays to Saturdays) and I will train her from Monday to Wednesday. This routine had been a weekly programme for Nik Danisha. She is so engrossed in gymnastics that she hardly takes a
rest. Even trains at home,” said Aniza.

“The NSC has been providing all the apparatus and leotards to female Muslim gymnasts. However, gymnasts of other races are exempted from wearing leotards, but most do like to wear them in training and competitions,” she added.

With Kelantan hosting the 2026 Malaysia Games, there is a high chance of a new hall is built for rhythmic gymnastics.

“We need more facilities for gymnastics. Especially rhythmics. The perception of people in Kelantan has changed and more families are encouraging their daughters to take up the sport. The attires are acceptable and it’s good that mindset has changed,” added Aniza.