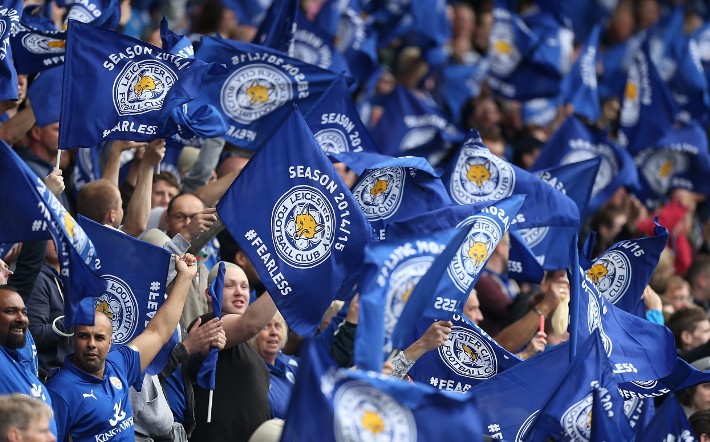 Leicester’s history may date back thousands of years but, in common with many provincial English cities, there has long been a sense it is a place you have to leave to achieve ambition and fame.

Leonie Orton, sister of the late Leicester-born 20th Century playwright Joe Orton, once told the BBC that “poverty”, “routine” and “ordinary” were the words her brother used to describe his view of a home town he was happy to depart for London.

But the city may soon be able to boast that it is the sporting, if not dramatic, capital of England.

Certainly, there has been nothing “routine or ordinary” about the way Leicester City Football Club, who have never been crowned champions of England in their 132-year history, have risen to the top of the Premier League this season.

The Foxes are now five points clear at the summit with four games left ahead of their match against Swansea on Sunday.

Now it is Leicester, not Liverpool, Birmingham or Manchester, who are in sight of saying they are home to both English football’s and European rugby union’s champion clubs, although ‘greedy’ London, courtesy of Tottenham Hotspur and Saracens, could yet take both titles away from the East Midlands city.

As if that were not enough, the Leicester Riders are currently top of the British Basketball League while even recently struggling Leicestershire County Cricket Club, who are also based in the city, have started their new season with a victory.

While the Tigers have long been one of English rugby union’s established powers, the Foxes were quoted as 5,000/1 outsiders to win the Premier League before the season started having only narrowly avoided relegation last season.

Managed by an Italian in Claudio Ranieri and owned by a wealthy Thai family, Leicester are similar to many Premier League sides in having a strong foreign involvement in the running of their club.

Nevertheless, Leicester-born former England striker Gary Lineker, who started his career with the Foxes but found much greater fame and fortune playing for Everton (in Liverpool), Tottenham and Spanish giants Barcelona, struck a chord when he wrote in the Guardian last month: “Something extraordinary is happening in the world of football.

“Something truly magical. Something that makes me well up with emotion,” added Lineker, now a BBC television presenter, who has also achieved fame or even notoriety for a series of adverts promoting one of the city’s most famous products in Walkers Crisps (potato chips).

Lineker, and most Leicester fans would doubtless be happy to witness a glorious ‘one-off’ triumph’ before the established English football order sort themselves out.

Tigers coach and former player Richard Cockerill said: “Hopefully they will go on and win the Premier League. It is like anything — sustaining that and doing it over a number of years is very difficult.

“Leicester have got smart owners and owners who have got lots of money so they can certainly compete financially, it is just a matter of whether they want to.”

He added: “There’s a pretty good relationship between sporting clubs, whether it be basketball, cricket, football or rugby. It is fantastic and great for our grand city. Basketball are doing really well.

“As ever the rugby club are struggling through!” he joked.

For Leicester mayor Peter Soulsby, it’s all a far cry from how the city was making headlines 12 months ago.

“Last year we were (re-burying) a king (Richard III) and then we had international and national attention and our only concern about the football club was whether they would manage to stay in the Premier League,” he told AFP.

“People have suggested there is a connection between the burial and Leicester’s rise but I think it’s more to do with two good managers, Nigel Pearson and Claudio Ranieri who built on the foundations. For the city, it is amazing.”

The Leicester Mercury newspaper even went so far as to publish guidance Friday from a locally-based psychiatrist on how fans could cope with stress.

“Avoid trying to predict the future and accept that some things are beyond your control…Things will be what they will be,” he wrote.

Well-meant advice but with Leicester’s lead at the top down to five points and star striker Jamie Vardy suspended for Sunday’s match against Swansea after being sent off last week, it may be easier read than followed. – Agence France-Presse