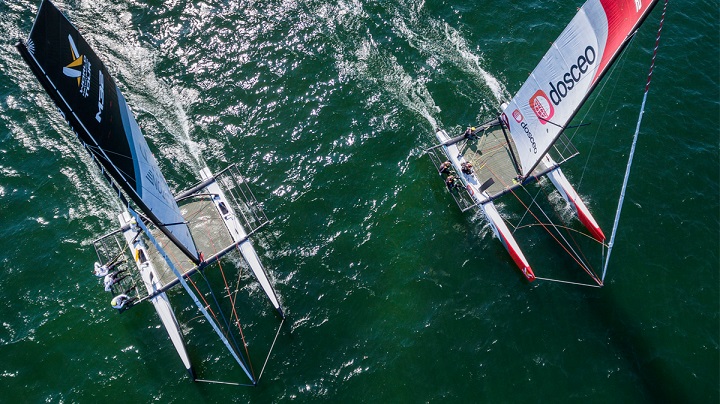 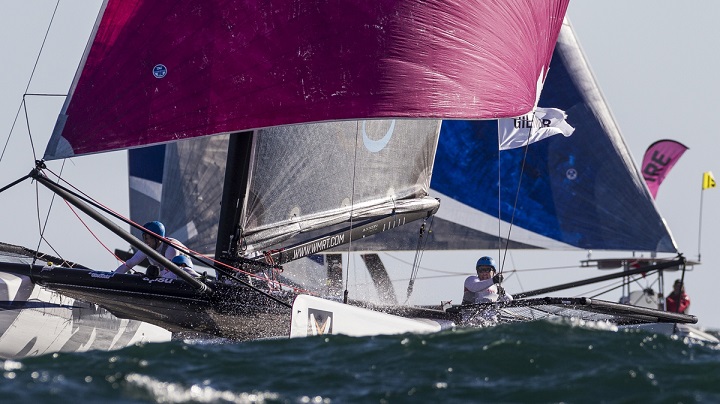 Eight teams, two of them with Rhode Island skippers and crews, will be sailing this Thursday through Saturday at Sail Newport in the Newport Match Race, a qualifier event to see who will win the three remaining berths of 20 available at next week’s World Match Racing Tour(WMRT) Newport.

The WMRT Newport’s main event officially kicks off on Memorial Day, but there has been plenty of activity this week at Sail Newport’s headquarters at Fort Adams where the events are being staged and sailors have traveled from around the world to practice.

Rhode Island skippers entering the qualifying series are Malcolm Gefter (Newport) and Michael Dominguez (Barrington). With their respective Lift Off and Bronco crews, Gefter and Dominguez are members of the M32 Fleet established in Newport in 2014, so their relatively long tenure in the speedy catamarans should serve to their advantage.

The M32s are sailed with four to five crew to meet a crew weight minimum of 350 kilos (just under 772 pounds) and take both talent and tenacity to sail. They are the high-octane sailboats chosen for the WMRT, which established itself in 2000 with monohulls and only in March, at this year’s first tour stop in Fremantle, switched over to the M32 catamarans for some high-tech excitement. (The WMRT stopped in Long Beach and Copenhagen in April and May, respectively, before coming to Newport, and it will culminate with the 2016 Final Event in Marstrand, Sweden in July.)

About the boats, which organizers have supplied for this event, Gefter said: “They are wild, but only if you don’t know them or until you learn how to sail them. We’ve been sailing our M32 for three years, so we’re pretty confident we know how to handle it.”

Gefter says another thing will set his team apart on the race course: its collective age. Gefter, is 74, and his crew – Lars Guck, Max Kramers, Sam Loughborough and Scott “Chuck” Norris (all from Newport) –  are all “40-somethings” but all with notable sailing careers.

“It’s obvious we’re the oldest team by many, many years,” said Gefter, “and it’s a very physical boat. We are going to the gym to work on our physical abilities, because we get outgunned by younger crews who have more horsepower and more stamina. But our boat handling skills will probably carry us somewhere, having all that experience on the boat. I think we have a decent chance; we won’t embarrass ourselves.”

The qualifiers entail match racing exclusively, while the main event next week calls for two days of fleet racing in order to get the seeding for the knock-out match racing rounds.

“Twenty teams racing in four groups of five will sail on Monday and Tuesday (May 30-31),” said WMRT Racing Director Craig Mitchell. “At the end of fleet racing, the bottom eight teams go into a match-racing sail-off to decide which four teams go through and which four go home.”

By Wednesday, only 16 teams, called the “Super 16,” will be left, and Mitchell will rack them into a tennis-type ladder for the first-to-three-points match racing elimination that continues through Thursday. “Eight teams go to the quarter finals (Friday), and in the end the first seed sails the second seed in the finals.  Those are scheduled for Saturday(June 4, between 2 p.m. and 4 p.m.) after Semi-Finals the same day. An Awards Ceremony will immediately follow the conclusion of racing at Fort Adams.

If Gefter, Dominguez or any of the other skippers in this week’s qualifiers make it to the main event, they have a chance to acquire points on a leader board and stay on the world tour.

“How well you finish determines whether you get a pass into the next round or have to requalify,” said Gefter.

Another of the M32s in the qualifiers, skippered by Michael Menninger of Newport Beach, Calif., will have Sam Hallowell and Thomas Allin (both Newporters) aboard as crew members along with Mac Agnese (Ft. Lauderdale). Another U.S. skipper, Mark Mendelblatt (St. Petersburg, Fla.) is perhaps the most accomplished, having represented the USA at the Olympic Games in both the Laser and the Star and served in the afterguard in the America’s Cup and on numerous big boat campaigns.

Hosted by Sail Newport, the World Match Racing Tour Newport is sponsored by WJAR TV Channel 10, Cox Business and Heineken. It runs from Memorial Day, May 30th, until June 4th at Fort Adams State Park and features high-speed stadium racing between 10 a.m. and 5 p.m. each day except for Saturday when the finals are expected to end at 4 p.m. Racing is inside Newport Harbor between Fort Adams and Goat Island.

The event will be live streamed online at www.wmrt.com from Thursday 2 June through Saturday 4 June. The event also features the race boats on display at the public dock, live play-by-play commentary broadcast throughout the shore-side venue as well as music, food, family lawn games, a hospitality tent, and an M32 on shore. The event is open to the public, with no admission fee and free parking.

As Rhode Island’s Public Sailing Center, Sail Newport aims to provide the experience of sailing to the public and will offer free Try Sailing! opportunities to visitors from Memorial Day through Friday of the World Match Racing Tour (May 30-June 3).

(Sessions are from 2:30 p.m. to 4:30 p.m. on all days but Saturday, June 4, when they are scheduled from 9:30 a.m. to noon. Experienced skippers and life jackets (for all ages) will be provided by Sail Newport.