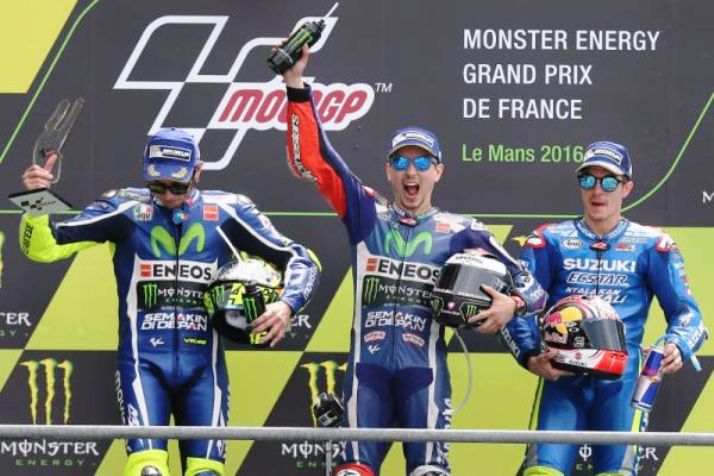 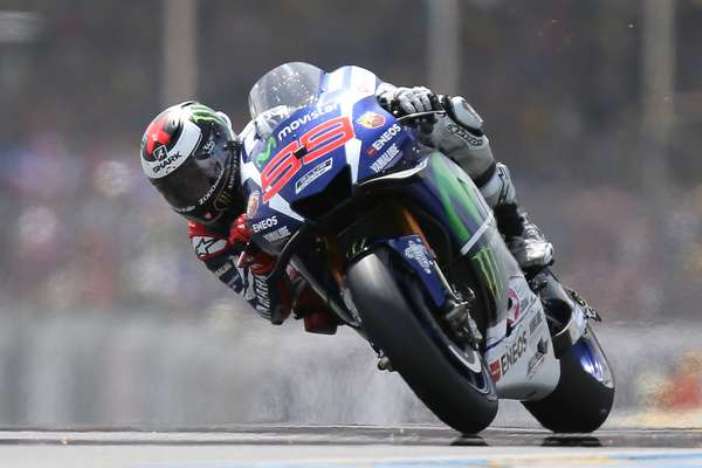 Jorge Lorenzo put in an exhibition ride to win a thrilling French MotoGP Grand Prix and go top of the world championship standings on Sunday.

The Yamaha rider crossed the line more than 10 seconds clear of his teammate Valentino Rossi, with Maverick Vinales on a Suzuki in third.

Lorenzo, who takes over the lead of the 2016 title race from Marc Marquez, was completing a perfect weekend in Le Mans after setting a record-breaking lap in qualifying on Saturday.

The defending world champion enjoyed a serene afternoon at the historic Bugatti circuit, avoiding mayhem behind with no fewer than eight riders parting company from their bikes.

“This was a very important race, a great race for the championship,” said Lorenzo, who now leads Marquez by five points.

Marquez was one of those to crash, although he remounted his Honda to trail in at the rear of the pack.

From pole Lorenzo got off to a quick start to boss this fifth leg of the season.

The main winner at the start was Andrea Dovizioso, riding for Ducati, who surged from sixth on the grid to race in second, tracked by Marquez.

Rossi, who set off from a season-lowest seventh after a mistake-strewn qualifying, triggered a huge roar from the crowd when he nipped past Marquez as the midway point of the race approached.

And the hugely popular Italian veteran soon only had his teammate Lorenzo ahead of him after overtaking Dovizioso.

With 13 laps to go Marquez and Dovizioso exited the scene in carbon copy crashes on turn seven, their bikes slipping from underneath them, to promote Vinales to third.

Championship leader Marquez manfully climbed back on board.

Unaffected by all that drama Lorenzo was racing smoothly in front, well clear of Rossi, who was seeking to follow up his win in Spain a fortnight ago with 10 laps remaining.

Turn seven was to prove the undoing of a third rider when British Yamaha rider Bradley Smith slithered out of the race.

Lorenzo, who was never in danger of being caught by Rossi in the closing stages, reflected on his 63rd overall victory and 42nd in MotoGP.

“I wanted to keep a high pace and not lose concentration, I kept pushing on the throttle,” he said.

“I could breathe a little more when Marquez and Dovizioso crashed.”

Rossi was a relieved man to add 20 points to his championship standings tally – he is placed third, 12 points adrift of Lorenzo.

“I lost a lot of time at the beginning but that’s normal when you start from the 10th row,” the Italian said.

“After good pace, I got in front of Marquez and Dovizioso but Lorenzo was too far in front.

“I’m happy, after a difficult weekend – 20 points is good for the championship,” which now moves on to Italy on May 22.

Vinales, after securing his first MotoGP podium and his team’s first since 2008, said: “We did a good job today, I lost many places on the first few laps then I recovered and pushed, pushed, pushed.”

Spain’s Alex Rins notched up his second Moto2 win of the season to go top of the standings.