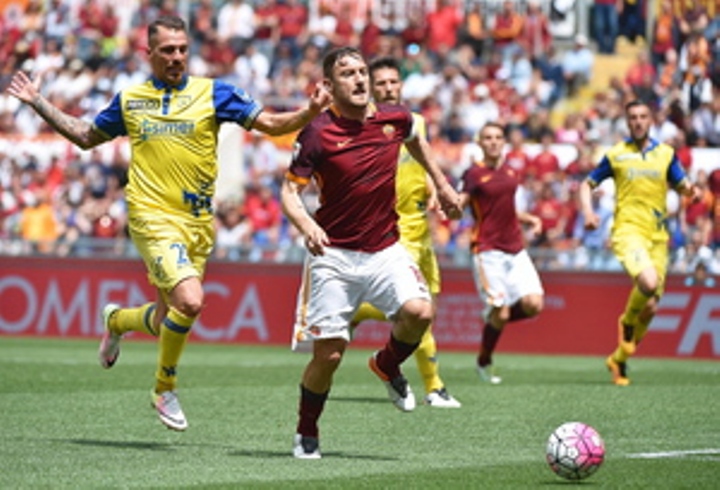 Francesco Totti made his 600th Serie A appearance as Roma heaped the pressure on Napoli to move up to second spot with a festive 3-0 home win over Chievo on Sunday.

One-club man Totti has yet to settle his future despite reports in midweek claiming Roma are finally warming to his request for a 24th and final year’s contract.

But with some believing this could be the 39-year-old’s final season in Italy’s top flight, fans, including ultras who had boycotted the Curva Sud for most of the season, flocked to the Stadio Olimpico to show their appreciation for the club legend through banners, t-shirts and flags which all paid tribute to the longevity and loyalty of ‘Il Re de Roma’ (King of Rome).

Some declared they had grown up on ‘Bread and Totti’, as opposed to bread and water, but the veteran playmaker was left on the bench as Luciano Spalletti’s men went about staking their claim for the league’s second automatic Champions League qualifying spot.

Roma’s 22nd win of the campaign moved them one point above Napoli into second place, and has heaped the pressure on Maurizio Sarri’s men before a tough away fixture at Torino later Sunday.

“I wouldn’t say no to them (Torino) getting a result for us, but no stress, we’ve done what we had to do today,” said Spalletti.

“Today we showed how much we wanted to win and it was great to see a stadium full of fans. Their support is precious.

“It was a great win, everyone enjoyed themselves and that’s the way it should always be.”

Reported Chelsea target Radja Nainggolan got the party started when he fired home from the edge of the area to beat Albano Bizzarri on 18 minutes.

Germany defender Antonio Rudiger doubled Roma’s lead six minutes before half-time when he headed Miralem Pjanic’s curling free kick past the stranded ‘keeper at the back post, although there was more than a hint of offside.

He, too, is praying Napoli drop points at Torino.

“We’ll be watching the game and I hope, like all Roma fans, Napoli drop some points on their trip,” said Rudiger.

Chievo earned more than their fair share of chances and Paul Jose M’Poku smacked the near post on the half-volley as Wojciech Szczesny came out of the Roma net to close down the angle shortly after the restart.

Totti was given a standing ovation by the fans before he even kicked a ball in anger when he replaced Egyptian winger Mohamed Salah on the hour.

Only Inter Milan legend Javier Zanetti (615) and AC Milan great Paolo Maldini (647) have made more appearances in Serie A.

The club talisman’s first touch left him crumbling to the ground after a challenge but hopes of earning a free kick were immediately waved away.

Again, Chievo threatened, Antonio Floro Flores nodding just wide before Szczesny was forced to bat away Sergio Pellissier’s effort when the towering striker got his head to M’Poku’s cross on the edge of the box.

Yet Roma were a constant threat and Stephan El Shaarawy twice came close to adding to the scoreline.

El Shaarawy first curled just side of Bizzarri’s far top corner from outside the left side of the area and, minutes later following a nice build-up by Lucas Digne, saw another promising shot fingertipped to safety by Bizzarri.

Totti has scored several goals for Roma recently after coming off the bench but this time settled for an assist, his one-touch pass allowing Pjanic to run clear and prod past Bizzarri with five minutes to play. – Agence France-Presse