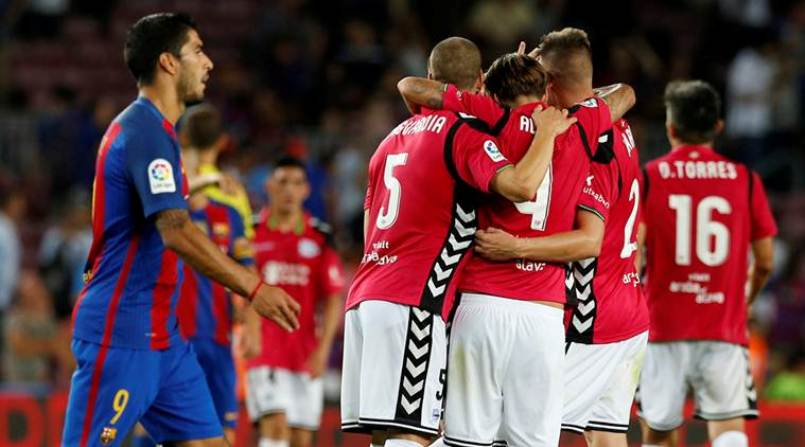 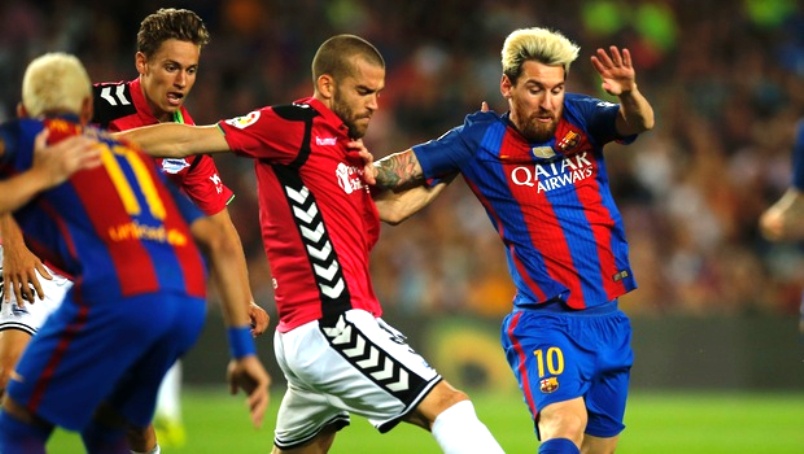 Barca boss Luis Enrique admitted he must take responsibility for the Spanish champions’ shock home defeat to newly promoted Alaves after starting Lionel Messi and Luis Suarez on the bench.

Enrique made seven changes on Saturday after many of his squad returned to club duty after taking part in World Cup qualifiers around the world in the past week, whilst Messi was also struggling with a minor groin injury.

“I am the one ultimately responsible for all the bad things that happen,” said the Barca boss after suffering just his fifth home league defeat in three seasons in charge at the Camp Nou.

“Many of the changes came from the circumstances surrounding us, but we have 22 players and we are going to use everyone this season.”

As well as leaving out Messi and Suarez, Enrique changed his entire back four, whilst goalkeeper Jasper Cillessen and striker Paco Alcacer made their debuts.

Deyverson beat Cillessen from close range to hand Alaves a surprise lead before half-time, but Jeremy Mathieu brought Barca back into the game when he headed home Neymar’s corner a minute into the second-half.

Mathieu somehow then blasted wide when it seemed easier to score from another set-piece before Barca’s makeshift defence was caught out once more when Ibai Gomez slotted home the winner.

Enrique called upon Messi, Suarez and Andres Iniesta from the bench, but even they couldn’t break Alaves’s resistance as Messi fired wide deep into stoppage time.

“We lacked fluidity, precision and we were fragile in defence, which is one of the things that normally makes us strong,” added Enrique.

“The one positive is it is a time to reflect on what this team has won over the years. Everyone makes us favourites for everything, but it is not easy to win any game.”

Enrique is expected to revert back to his strongest line-up for Celtic’s visit to the Camp Nou to start their Champions League campaign.

The Scottish club will be high on confidence after thrashing old rivals Rangers 5-1 on Saturday.

“It’s clear it wasn’t our best game, they didn’t have many chances but they were very effective,” said midfielder Sergio Busquets.

“We lacked a spark, we lacked a lot of things. It is hard to say it is a deserved defeat because they also didn’t create a lot.

“Now we have to think about Celtic because the season rolls on.”

And Iniesta insisted Barca will have licked their wounds and learned the lesson in time for the visit of the Scottish champions.

“We have to do better in the next game in a different competition,” added the Spanish international. “As always when there is a defeat, we have to analyse it and correct it for the next game.” – Agence France-Presse