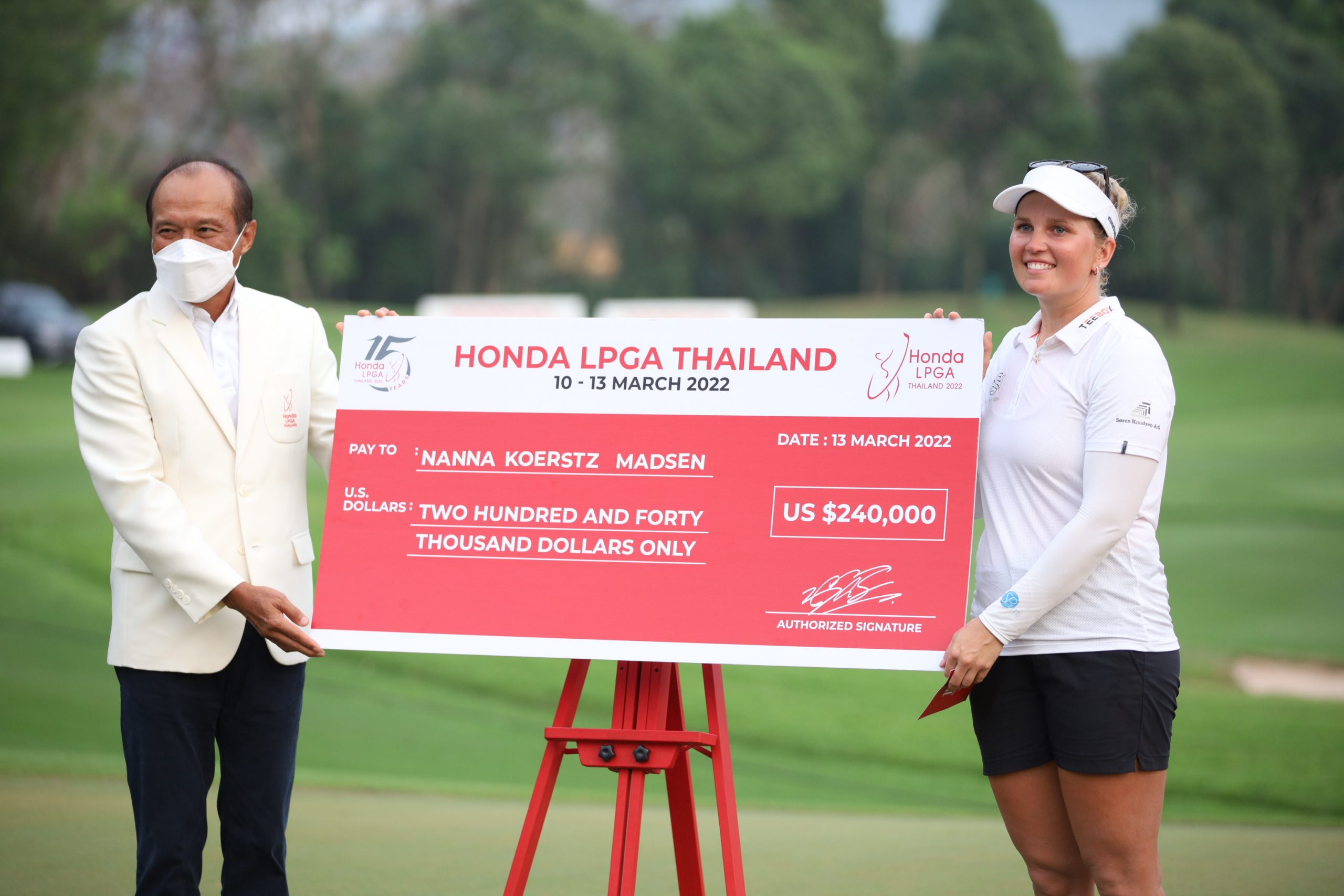 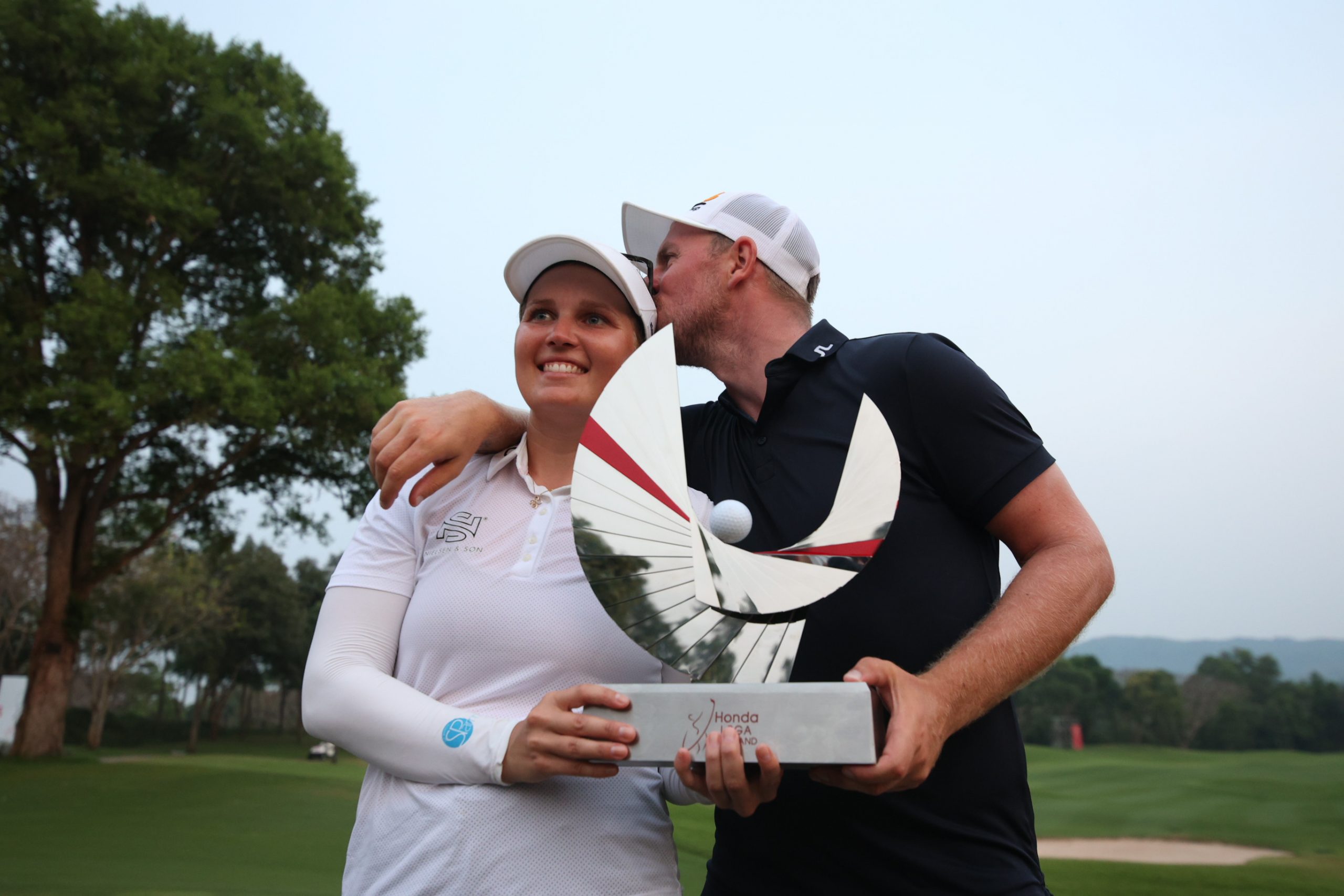 In a final round of high drama Denmark’s Nanna Koerstz Madsen won her first LPGA Tour title when she secured the Honda LPGA Thailand title on Sunday with a second sudden-death playoff hole over China’s Xiyu Lin.

They both finished regulation on a new record breaking 26-under-par 262 at the Siam Country Club Old Course, Pattaya, Chonburi, before returning to the 18th hole for the extra holes. With the honours shared on the first playoff hole, Madsen eagled the second to lift the trophy and take home the winner’s cheque of US$240,000.

For her efforts, Xiyu went home with the runner’s-up prize of US$150,488 and lots of experience gained in a tough fight down the home.

It surely was an incident-packed fourth round and even if Madsen did deserve to win it in the end, there was no shortage excitement on the last day of the tournament, where most of the world’s leading women’s players and sponsors’ exemptions also attempted to win the all-new Honda HR-V e:HEV hole-in-one prize on No 16. Sadly, there were no takers.

Overnight leader Madsen shot a fourth and final day 66, her third six-under round of the event, following an opening day 64.

But she came close to giving it all away over the last couple of holes in regulation, when she went from a four-shot lead with three holes to play, to all even with Xiyu after 72.

Bogeys by Madsen at the 16 and 18th holes, and birdies for Xiyu at the 17th and 18th, kept everyone guessing who would win it. Madsen’s fans must have felt she lost when she hit her approach into a hospitality tent on the last hole, only to survive for the playoff.

In third place was France’s Celine Boutier, carded a 67 of her own and finished on 25-under 263, taking home US$109,168. Meanwhile South Korean Amy Yang and one of the pre-tournament favourites, Canadian Brooke Henderson were tied for fourth on 23-under 265. 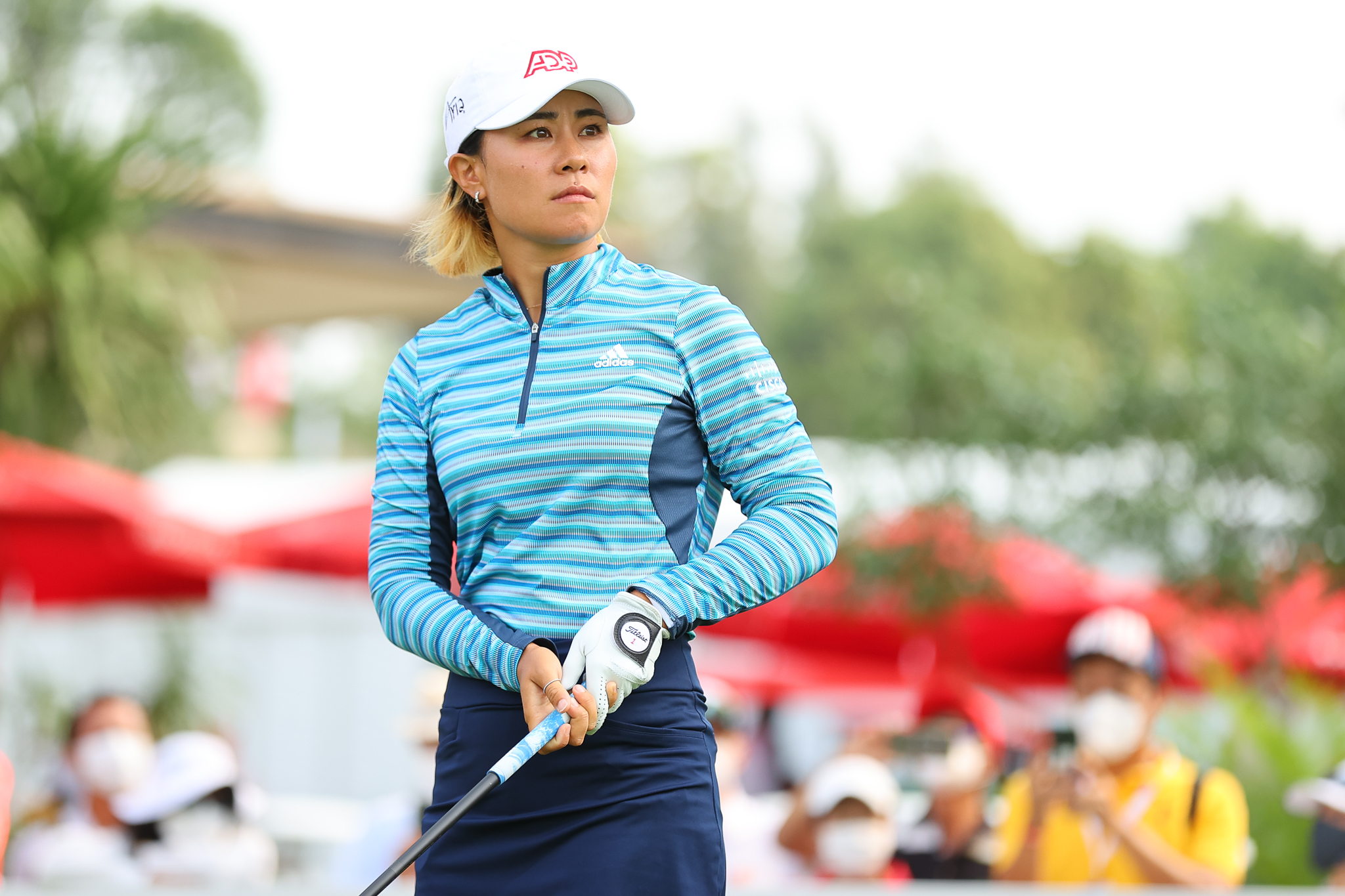 Hyo Joo Kim and Jennifer Kupcho were joint sixth on 22-under 266, and Thailand’s best-placed player Atthaya Thitikul, Danielle Kang, who struck a hole-in-one today, and Japan’s Hinako Shibuno were tied for eighth on 20-under 268. Yuka Saso, representing Japan, shot the low round of the tournament when she matched the course 62. She was bogey-free with an eagle and eight birdies in her round.

Madsen, the first player from Denmark to win on the LPGA Tour, said after her victory: “It was fun. I really tried to enjoy the moment. Standing now with the trophy it’s even more fun. A little blunder on 18, in ordinary play (regulation) was not very fun. But now it’s great. My game is really trending in the right direction. I mean, you can say that I have more confidence with my game and myself. I believe that I can win out here, so that’s just what I’ve been chasing for the last year.”

Xiyu Lin, on how she was feeling: “I realised I’m only two behind going into the last hole. I was still not thinking of anything because I just thought I’m going to give myself another birdie chance and I hit such a good second shot and left myself an eagle chance and ended up getting into the playoff.

(On the first playoff hole chip that went close) “I just cannot believe that chip didn’t go in. But, I mean, I’m pretty proud of myself. I haven’t been into many playoffs and neither match play as well, so I was only nervous for a little bit and then I quickly calmed. And then I think both holes I was making birdies, so I did know what I can do,” she added.

Celine Boutier, who eagled the 18th hole said: “I hit a really good second shot, like an approach shot I guess and I wasn’t sure where it was. I just thought it was going to be like long on the green and then I saw it was like a chip. But it’s all uphill and into the grain, so I just was focusing on hitting it close and just making a birdie. And then when I made contact I knew it was like a good shot and I knew I had a chance, but having it go in is definitely a bonus.

” I’m going to try to focus on the positives. I feel like it’s very easy to get down. I was a little bit frustrated with my week last week in Singapore and then being able to finish third this week is – obviously I know I can improve on some stuff, but with the way I was driving it, I feel like third is a pretty good finish.”

Three-time winner Amy Yang said she was pleased with her performances and added: “I think I played great, like not just this week, last week as well – the whole Asian swing. I’ve been working on my swing and short game and everything. I can see it’s going in the right direction.

“You know, I see the progression, so I’m happy with my game right now. You know (also), I just like this golf course. I have been here many times now. I know how to play the course. You know, of course I worked hard as well, but I just love the place. I think that makes me enjoy the game more each day and just that brings a better result every day.” 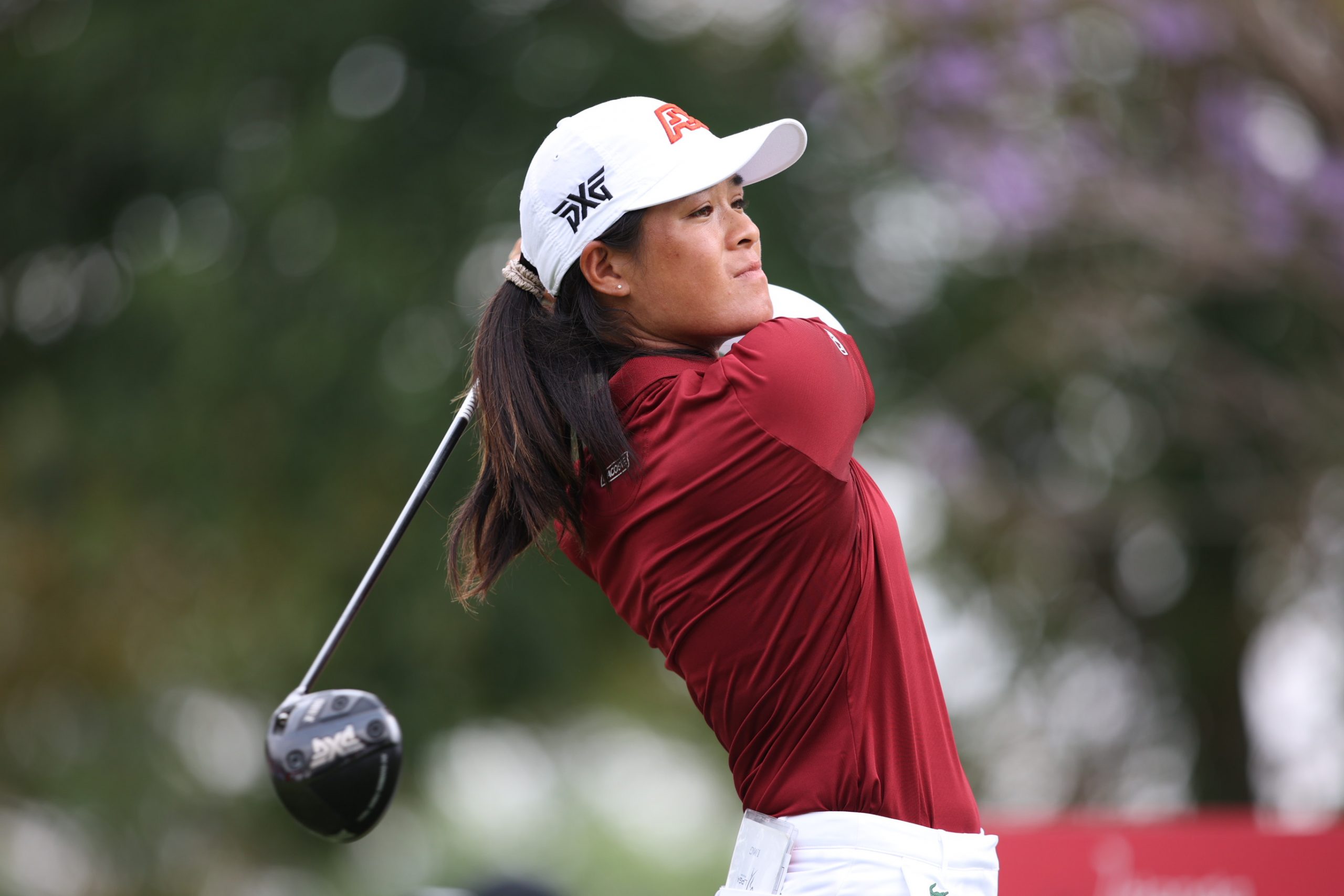 After her hole-in-one on number eight, Danielle Kang said: “I thought it was the car hole actually (but it was not). Some fans got it (on phone video clips). They sent it to me on my phone. It’s actually a streak now that Golf Channel has missed – or like whoever is airing – has missed my hole-in-one, so no one has actually seen it live, and this is my 14th hole-in-one.

“I also couldn’t make a lot of putts out here. I hit the ball phenomenally the last four days. Unfortunately it wasn’t my short game that wasn’t my forte the past two weeks, and it’s okay. Positive things, I’m hitting it really well and really consistently, so I’m really happy about that. We also had a huge crowd. Hometown kind of favourite, Atthaya (of Thailand) was playing with us. It was really cool.”

Ms. Winnie Heng, Vice President and Managing Director for Thailand at IMG, said: “Congratulations to Nanna Koerstz Madsen on her very first LPGA win. We’re honoured to have it be the Honda LPGA Thailand. Nanna played very well and gave an exciting finish alongside Xiyu Lin to an entertaining tournament.

“A big thank you also goes to all the players in the field for treating us to an amazing week of top quality golf. The support and camaraderie amongst the players on this Tour is phenomenal and we are also proud to have several Thai players in the top-half this week. This result is a testament to Honda and all the sponsors’ on their commitment in helping develop women’s golf in Thailand, which also benefits the region and the LPGA Tour as a whole.”