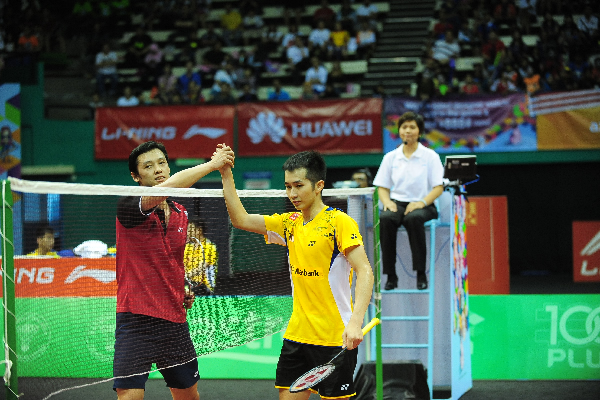 MALAYSIA, could only manage a fourth placing in the 3rd edition of USD1 million Axiata Cup badminton team in a cruel way – losing 147-140 on points score to Asia All Stars made up of players from Hong Kong, Taiwan and India. The third-fourth playoff ended 2-2 and the games score also ended in a stalemate with, both, Malaysia and Asia tied on 4-4 – which brought the points score into consideration to break the deadlock.

It turned out to be another heart-break for the Malaysians who lost 6-4 on games in the semi-final match against Indonesia on Saturday.
But on Sunday, the malfunctioning stadium lights at the Kuala Lumpur Badminton Stadium in Cheras during the men’s singles between Chong Wei Feng and Hu Yun, forcing the match to be stopped several times, in coach Rashid Sidek’s own words “played a role in Malaysia’s defeat”.

“Our bet was to win the men’s singles and the men’s doubles and mixed doubles. Wei Feng was leading in both sets but several stoppages during the match broke his rhythm. It is not easy to regain your confidence when you are playing against a player like Hu Yun,” said Rashid on Wei Feng’s 20-22, 16-21 defeat to the Hong Kong player.

In the women’s singles Tee Jing Yi was spent force against Taiwan’s Tai Tzu Ying after her titanic three-set match against Indonesia’s Bellaetrix Manuputty. The Malaysian, who won 13-21, 22-20, 21-19 against the Indonesian, could not match the Taiwanese’s “speed, good strokes and good shuttle control” and lost tamely in 12 and 8.

“There are too many tournaments and the Axiata Cup is not on our list of targets in a calendar year but it does not mean we did not focus on this meet. Reaching the semis is not bad,” added Rashid.

Asia took home USD150,000 for finishing third place while Malaysia settled for USD100,000 for their efforts.