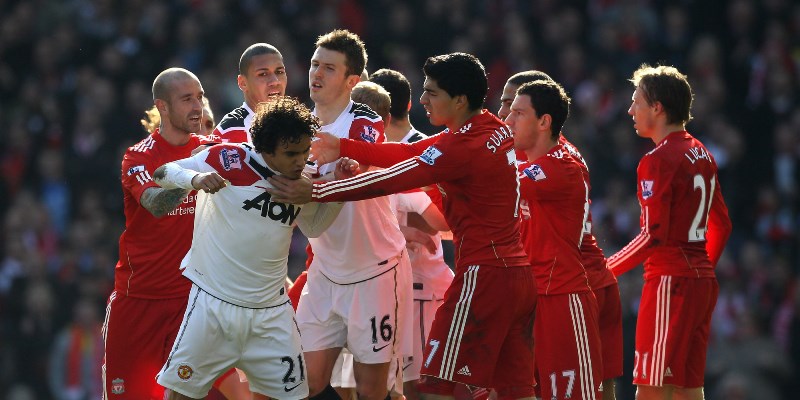 The bitter rivalry between Manchester United and Liverpool is now played out on a global stage but the origins of the divide are deeply rooted in the battle for supremacy in England’s northwest.

United and Liverpool, who both play in red, have a combined tally of 38 English league titles and eight European Cups and both enjoy a vast following throughout Britain and around the world.

For all the rancour between fans of the country’s two most successful clubs, located just 30 miles (48 kilometres) apart, they share much in common — a history of enviable success but also of deep tragedy.

Last month United marked the 60th anniversary of the Munich air crash that killed 23 people, including eight players, on their way home from a European Cup quarter-final in Belgrade.

In 1989, 96 Liverpool fans were killed in a crush at Sheffield Wednesday’s Hillsborough ground as they attended an FA Cup semi-final.

“They have a global profile cities of a similar size don’t have and United and Liverpool have given them that profile,” Andy Mitten, editor of the United We Stand fanzine, and Manchester native, told AFP.

“These are two huge clubs with similar histories of triumph and tragedy that hail from cities that punch well above their weight demographically.”

The two sides first met as far back as 1894 — in the same year as the opening of the Manchester Ship Canal, which sparked tension between the rival cities by undermining Liverpool’s position as a commercial port.

However, most of their success has been condensed into two prolonged spells of domination. Rarely have both clubs been on an upward curve at the same time.

Liverpool left their rivals in the shade during a prolonged period of dominance from 1973 until 1990, winning 11 league titles and four European Cups.

Alex Ferguson, who arrived at Old Trafford in 1986, famously described “knocking Liverpool off their perch” as his biggest challenge as United manager and he duly delivered, ending the Red Devils’ 25-year wait to win the league, scooping up 13 titles and two Champions League crowns.

Neither side have won the Premier League since Ferguson retired in 2013, though, and when they meet on Saturday it will be second place rather than the title on the line, with runaway leaders Manchester City the new top dogs in the northwest.

Jose Mourinho’s United are on 62 points, just two ahead of Jurgen Klopp’s Liverpool. City are over the horizon with 78.

Yet that has not diluted the feeling on both sides of the divide that a clash between United and Liverpool remains the highlight on the English football calendar.

“Over the history of English football it is certainly the biggest,” former Liverpool winger Steve McManaman told AFP.

The year after Ferguson’s departure, United fans had an uncomfortable choice to make as City pipped Liverpool to the title, extending the Anfield club’s now 28-year drought without winning the league.

“It was interesting in 2014 when both were going for the title how many United fans didn’t want Liverpool to win it because they haven’t won it for 28 years and they had 18 titles to City’s three,” said Mitten.

“City are a better team than Liverpool but they’ve just overtaken Huddersfield Town with four titles.”

However, the price of success has been a gradual chipping away at their local identity.

Both clubs are now American-owned, coached by a German and a Portuguese, while their top scorers, Mohamed Salah for Liverpool and Romelu Lukaku for Manchester United, hail from Egypt and Belgium.

When the sides line up on Saturday, it is possible not a single Mancunian or Scouser will feature among the 22 players that start.

“Local players add something intangible, a sort of mentality that is hard to find or instil in players that hail from elsewhere,” said Zarif Rasul, author of “Liverpool FC: The Greatest Goals”.

“It has felt as though the team have lacked something since Steven Gerrard and Jamie Carragher hung up their boots.”

But that loss of identity does not dim the delight in getting one over on your biggest rivals.

“Irrespective of the teams’ positions in the table, everything is always better after beating United,” added Rasul. – Agence France-Presse