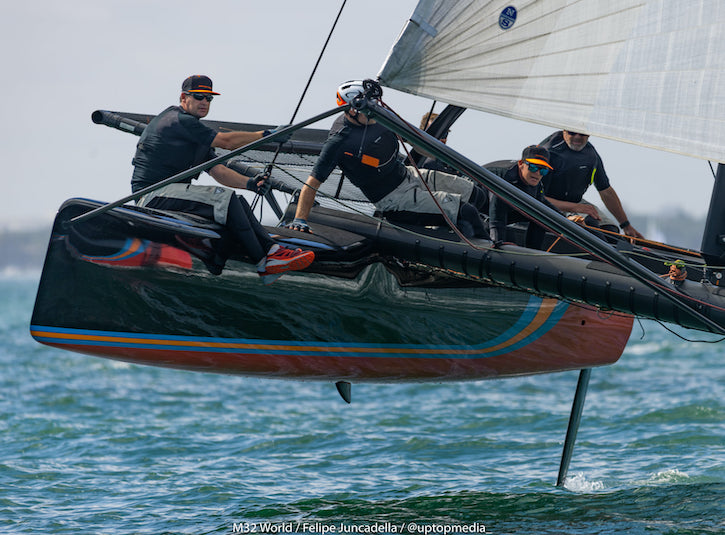 The second event of the M32 European Series was hosted by beautiful Medemblik in the Netherlands. It gave the M32 fleet fantastic racing over a range of wind conditions. In the heavy air on day one Vitamina Veloce Cetilar with Skipper Andrea LaCorte showed the fleet how it’s done with a series of wins.

They successfully defended their stellar performance of the first day and won the event and is now the new leader of the Series. “By the end of the weekend some of the other teams really got their act together and we had a good fight on our hands especially with PJ [Sailing Team NL] and Hakan [Cape Crow Vikings]”  Says Adam Minoprio, Vitamina Sailing tactician.

Two new teams joined the series for the Dutch event. PJ Postma, local hero and recent Finn World Champion, got a team together and showed that they will be a force to reckon with. Peter Warrer is rejoining the fleet this time with Olympic Gold Medallist, and son, Jonas Warrer as tactician. A gear failure on day one took them out of the podium fight but over the weekend they showed that they belong among the top teams.

Classic Venue
The classic sailing venue at Lake Ijsselmeer showed its best side with southwesterly winds keeping the breeze off shore and having flat water favoured by the multihulls. A light drizzle in the morning of race day one quickly disappeared and three days of sunshine and winds between 12 and 22 knots followed. “We have always had the weather with us in Medemblik” says class PRO Mattias Dahlstrom and continues “We did no less than 16 races, all in sunshine, over the three day regatta on a very tactical course with plenty of opportunities”. 4 teams won races while all of them got top three results.
m32world.com/results/

The Dutch hospitality was on full display as local Team Leeloo with skipper Harold Vermeulen hosted a much appreciated dinner in the Regatta Center Restaurant. Class and Sailors say Thank You, Dankjewel!

Deeply Missed and Always Remembered
The recent tragedy in Newport where M32 sailor Hayden Goodrick lost his life was recognized among the fleet. Hayden had been with the M32 class from the very beginning with the Scandinavian Series and is a member of the M32 family that will be deeply missed. A moment of silence was held at the initial skippers meeting including a brief description of the tragic event. Stories and memories of Hayden and his fantastic life were shared among sailors and friends throughout the event.
m32world.com/news/

Next Stop Marstrand
The M32 fleet now goes further north to Marstrand, Sweden for the next event of the series in July. In Marstrand the fleet is joined by two American teams including the reigning World Champions Team Convexity with skipper Don Wilson. More American teams will join the Europeans in September as the final preparation for the M32 event of the year; The World Championship in Cascais in October.
m32world.com/calendar/

The M32 Demo Boat
The M32 Demo Boat is the perfect way to get introduced to M32 racing in a way that is tailored to your background in racing and other classes. Maybe you have your own racing team and just need a few hints on M32 specifics, or maybe you need help with setting up an M32 experienced crew and start from the beginning with multihull racing. During the 2022 season there will be demo boats available across Europe.
m32world.com/demoboat/
m32world.com/sales/