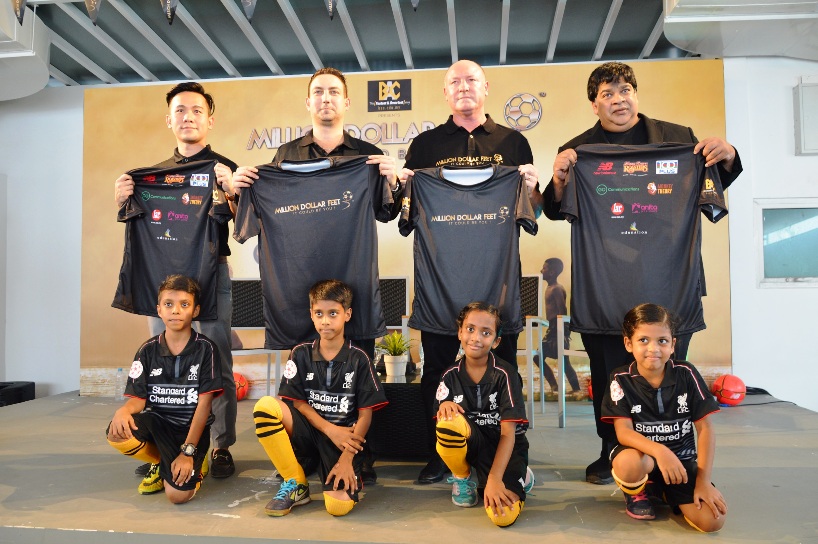 With the realisation that true sporting excellence begins right at the grassroots, a fresh programme aims to do just that, lending fresh inspiration to budding footballers. Launched today, Million Dollar Feet™ will provide an exciting platform for young, up-and-coming superstars to shine by finecombing the country for the best talents aged 11 to 14. Two of the very best will be given the opportunity to get even closer to the dream of signing with a top European club.

Million Dollar Feet™ will hold open calls at five locations across Malaysia – Penang, Kuantan, Kuching, Johor Bahru and Kuala Lumpur. Following a series of tryouts, drills and intense competition led by Head Coach and former Liverpool Captain Steve McMahon, two of the very best will be rewarded with an all-expense-paid trip to United Kingdom. There, they will audition for scouts for a chance to sign and potentially play for a premier European club.

According to Peter de Kretser, Founder and Director of Football of Million Dollar Feet™, “This programme is all about making dreams come true, while putting the country on the world map for football. It’s quite straightforward – your background, race, creed and social status don’t matter here.

If these kids have the right calibre and talent, we will give them a chance to shine – simple as that. No politics. No hidden agenda.”

Meanwhile, Steve McMahon, Head Coach of Million Dollar Feet™ commented, “Malaysia truly can and should thrive in the international football arena. What is needed, however, is a platform to springboard the career of deserving young local talents – and Million Dollar Feet provides exactly that opportunity.

I look forward to discovering some top talents in these tryouts and I believe we could possibly see the first Malaysian bred player signing into a world-class club in the near future.”

Tryouts for Million Dollar Feet™ will kick start in Penang, before moving on to Kuantan, Kuching, Johor Bahru and Kuala Lumpur, before the grand finals, which will also be held in Kuala Lumpur. Tryouts are scheduled to take place in September and October.

Interested candidates can sign up for Million Dollar Feet™ at www.milliondollarfeet.com. The stage is set. New Malaysian sporting heroes will soon be in the making, enlarging Malaysia’s mark in the world stage and prove that Malaysia can indeed bola. Now, that’s gold!

Million Dollar Feet™ is presented by Brickfields Asia College, and sponsored by New Balance, Kenny Rogers ROASTERS, 100 Plus, LAC Packaging and Printing Press, and Anita Gift and Souvenir in support of EduNation.