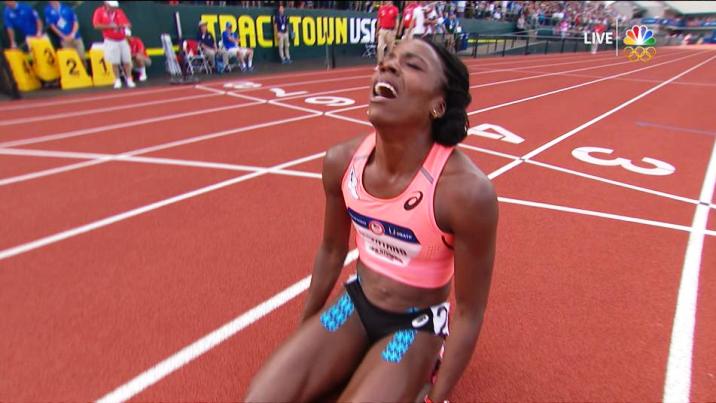 Alysia Montano launched a blistering attack on track and field’s world governing body here Monday as her dream of Olympic redemption after being denied a series of medals by dope cheats ended in tears.

The 30-year-old Montano — an outspoken voice in the fight against doping — was left distraught after an apparent collision with Brenda Martinez sent her crashing to the track on the final bend of the 800m at the US Olympic trials.

Montano picked herself up but staggered across the finishing line in last place sobbing as the realization that her hopes of earning a place on the US team for Rio de Janeiro had evaporated.

It was an agonizing climax to what has been a tumultuous year for Montano, whose world has been upended by the revelations that emerged in the doping scandal that has led to Russia being barred from the Olympics.

The World Anti-Doping Agency (WADA) investigation found evidence of a state-sponsored doping program in Russian athletics that Montano believes robbed her of medals at the world championships in 2011 and 2013 as well as the London Olympics in 2012.

One of her main rivals, Mariya Savinova, is facing a lifetime ban from the sport following the revelations.

“I’m missing three medals. In my eight years of life as a professional runner, my entire professional life has been a farce,” Montano told reporters tearfully at Hayward Field here Monday.

“Everyone’s coming out and talking about the Russians not running in the Olympics — but they’re missing the whole point that the IAAF (International Association of Athletics Federations) is a corrupt institution which is still running the game for us professional athletes.”

The IAAF has also been rocked by a corruption scandal detailed in a separate WADA report which found that former officials at the top of the organization had been paid bribes to cover up positive dope tests.

Montano said preparing herself to race in Eugene in the face of her fury at the doping scandal and the IAAF corruption allegations had been a challenge.

“Trying not to take that anger with me to today and still try to be in the sport, knowing that who’s been running the show have been using us all along. That’s why it was an emotional struggle for me,” Montano said.

“I felt like my biggest struggle this year would be staying emotionally intact, finding peace and knowing why I’m even trying for the Olympic team, what it means to be even going for a medal. And I’d made it all the way to the final, with all that emotional baggage.”

Montano later denied responsibility for the collision that knocked her and Martinez out of contention.

“I didn’t touch anyone,” she said, taking issue with a claim from Martinez’s coach that she was to blame.

“He needs to go and watch the footage but if this is going to be a blame game I don’t really want to play that right now.” – Agence France-Presse