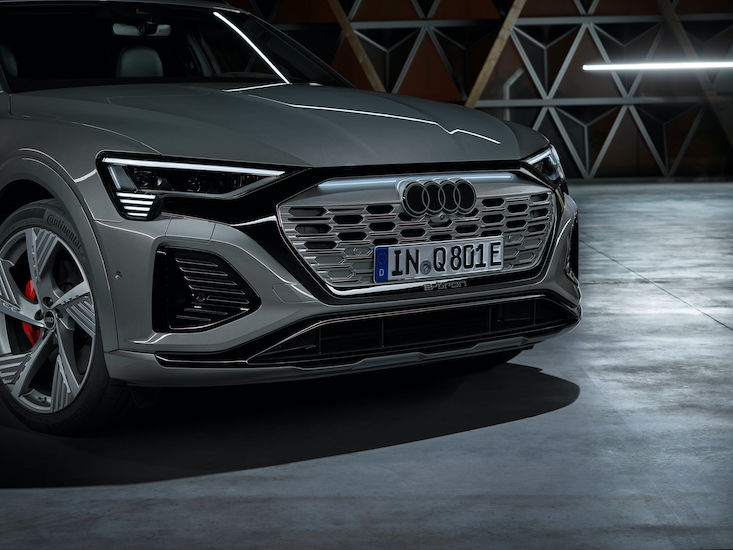 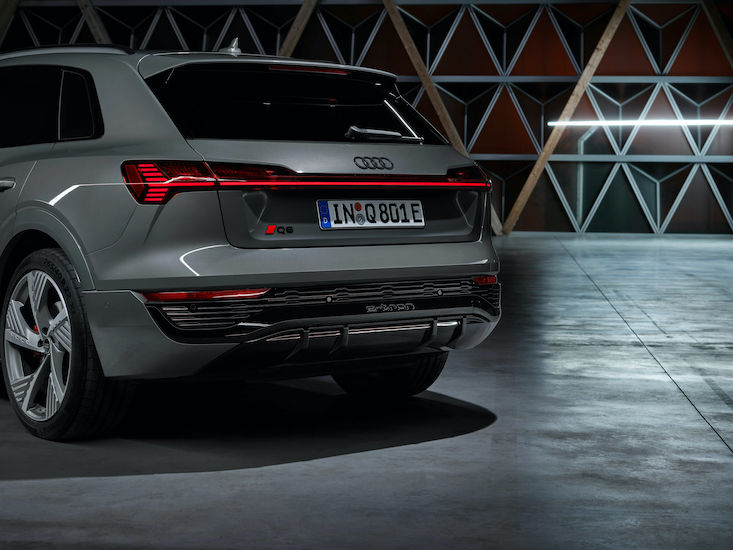 Audi stands for Vorsprung durch Technik, for innovative mobility. A promise that the four rings aim to reflect through a progressive design. Now the vehicles’ characteristic features have been thoroughly reworked. In this interview, designer André Georgi and brand strategist Frederik Kalisch explain what it means for Audi now that its cars bear new rings.
The four rings are one of the most important identifiers of the Audi brand.
Why the change now, right on the vehicle itself?
Frederik Kalisch: As a progressive premium brand, Audi targets modern customers who value high-quality design and attention to detail. There are really only two basic trends in brand presentation and product design today that express precisely this premium quality: That is, on the one hand, the loud and very bold, and on the other, the restrained, pure, and clean.
André Georgi: The purist approach is more in line with our philosophy. One readily apparent thing: Strong brands win over customers primarily through their products underlying substance and discreet identifying elements. At Audi, this has always been the case, and we’re now making it even more consistent. Our philosophy is that every detail must convey a meaning or serve a purpose. On the product, it is – above all, our four rings, unmissable on the front and rear of every Audi model, that make an Audi an Audi. We want our quality to speak through the design and the product itself. The new two-dimensional look gives our rings a significantly more modern and even more graphic makeover, although their geometry is almost identical to the former ones.
Modern, but not fashionable – that is Audi’s claim. However, two-dimensional logos seem to be the current trend. What role does the zeitgeist play in the design?
Kalisch: Two-dimensional rings originated at Audi in 2016 as a consequence of digitalization, essentially to depict the rings in a manner that suited the medium. Three-dimensionality on two-dimensional displays would not have met our technical and aesthetic requirements. So, we opted for a 3D look. Our brand logo is highly graphic – which is an advantage, as it looks great in two dimensions. To ensure a consistent brand presence across all customer touchpoints, we coordinated with the design team to kick off the process of redesigning the rings on our vehicles.
Georgi: Using a two-dimensional logo on the outside of our vehicles first came up in 2019. Then things really took off at the beginning of 2020. Our vision is to move the corporate identity from the digital area we just described onto our vehicles and to standardize vehicle identification across all models. We want the four rings to look the same everywhere in the future: Whether in a magazine, on your smartphone, or a billboard – and on or inside the car.
What exactly has changed in terms of design?
Georgi: Our vehicle logo comprises three components. We’re keeping it consistently free of chrome with a high-contrast black-and-white look. It’s as though the striking white floats are embedded in a black glass body for an even greater radiance. By optically brightening the logo, the white lends the rings a flat, premium-quality look, which still appears three-dimensional in detail.
But it’s not just the color scheme; the materiality is also new. Can you explain that in more detail?
Georgi: Today’s chrome rings stand for high quality; the material alone conveys that message. But we believe that we have found the “new chrome”: The clarity of the new black and white rings makes our corporate identity unmistakable. The thin black border around the rings makes for a consistent, premium-quality appearance, regardless of the car’s paint or radiator grille color. And customers can continue to opt for our new rings in black. This variation replaces the white with a dark gray that looks like high-gloss black.
From now on, all new Audi models will not only bear new rings, but you have also updated the vehicle identification scheme. Why?
Kalisch: In 2020, our team reworked the brand strategy and corporate identity. This rework led to our new vehicle identification strategy, including the vision of two-dimensional rings on our vehicles. The updated identification scheme matches our new brand strategy. That means more understatement, more sophistication.
Georgi: It’s not only that vehicle identification has become more premium; we have also standardized the fonts in and on the vehicle. In the future, our models will only use Audi’s unique font, known as “Audi Type”. The basic tone is significantly more restrained without compromising on distinctiveness or quality. We’ve now designated the B-pillar as the detailed model, derivative, and technology identifier. This designation is because it has an identical design across all vehicles: always two parts in high-gloss black and always in the passengers’ field of view when entering and exiting. The lettering on the B-pillar was deliberately engraved tone-on-tone.
Kalisch: Besides distracting from the design of our cars, overly conspicuous identifiers probably wouldn’t go down well with our contemporary, progressive customers either.
Georgi: Identification and vehicle design now act as a unit that aligns with Audi’s new brand positioning.
Short biographies
André Georgi studied automotive engineering and completed a second degree with a major in transportation design. He began his career at AUDI AG over 20 years ago. For the first ten years, Georgi worked in the Exterior Design department, where he was responsible for headlights and rear lights. Later, he headed Product Design at the Design Studio in Munich. Georgi has been involved in interior design since 2017, leading the Interface team and overseeing the redesign of the rings.
Frederik Kalisch studied industrial design and started his career with an internship in design strategy. After completing his degree in brand strategy, Kalisch worked externally for AUDI AG in the Design Strategy department. In 2011, he returned to Audi to work as a brand strategist. After working briefly in the Digital Business Strategy team, Kalisch continued his role as a brand strategist in 2019. Currently, he is responsible for the naming and identification strategy for the existing and future model range.