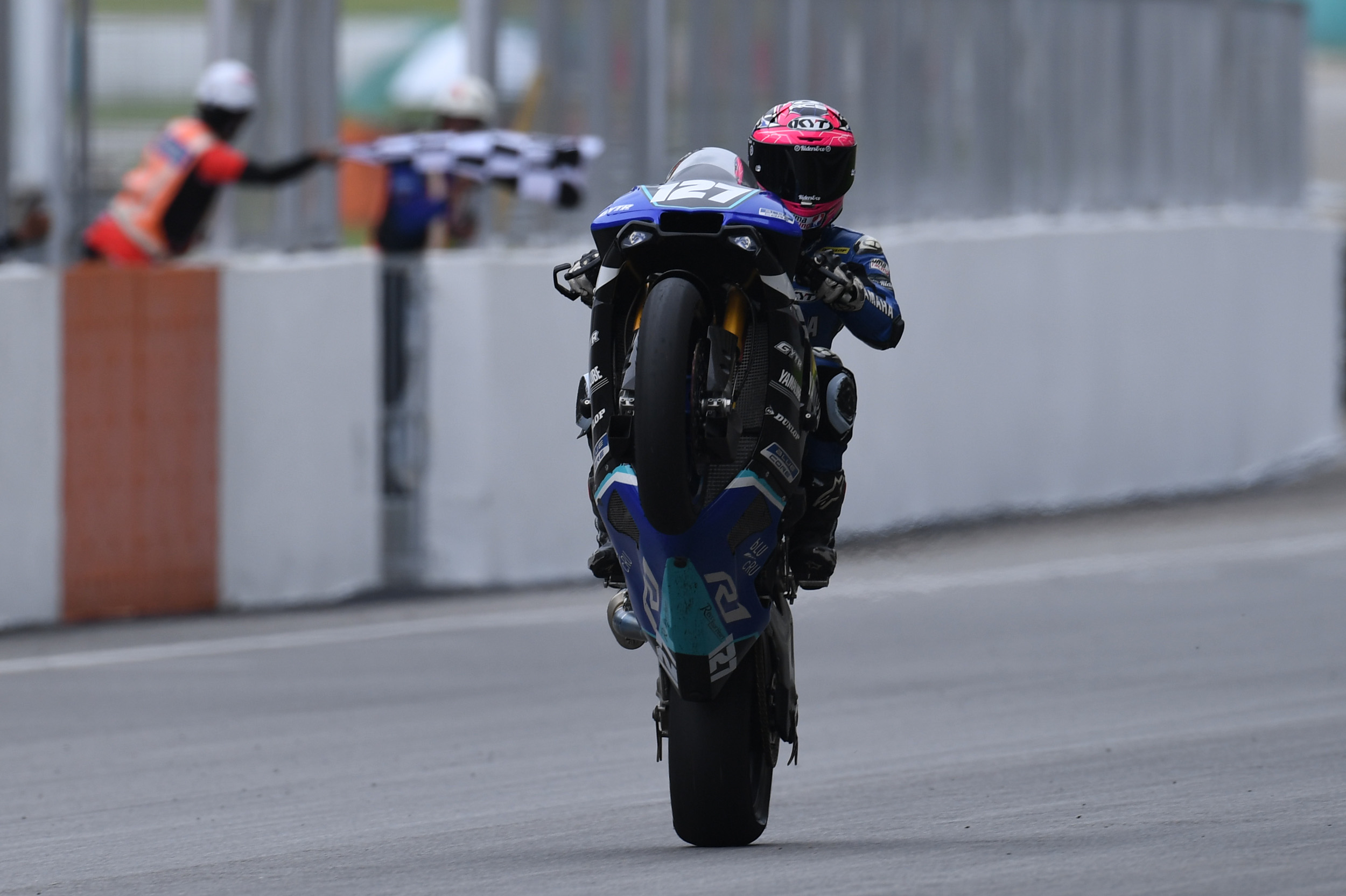 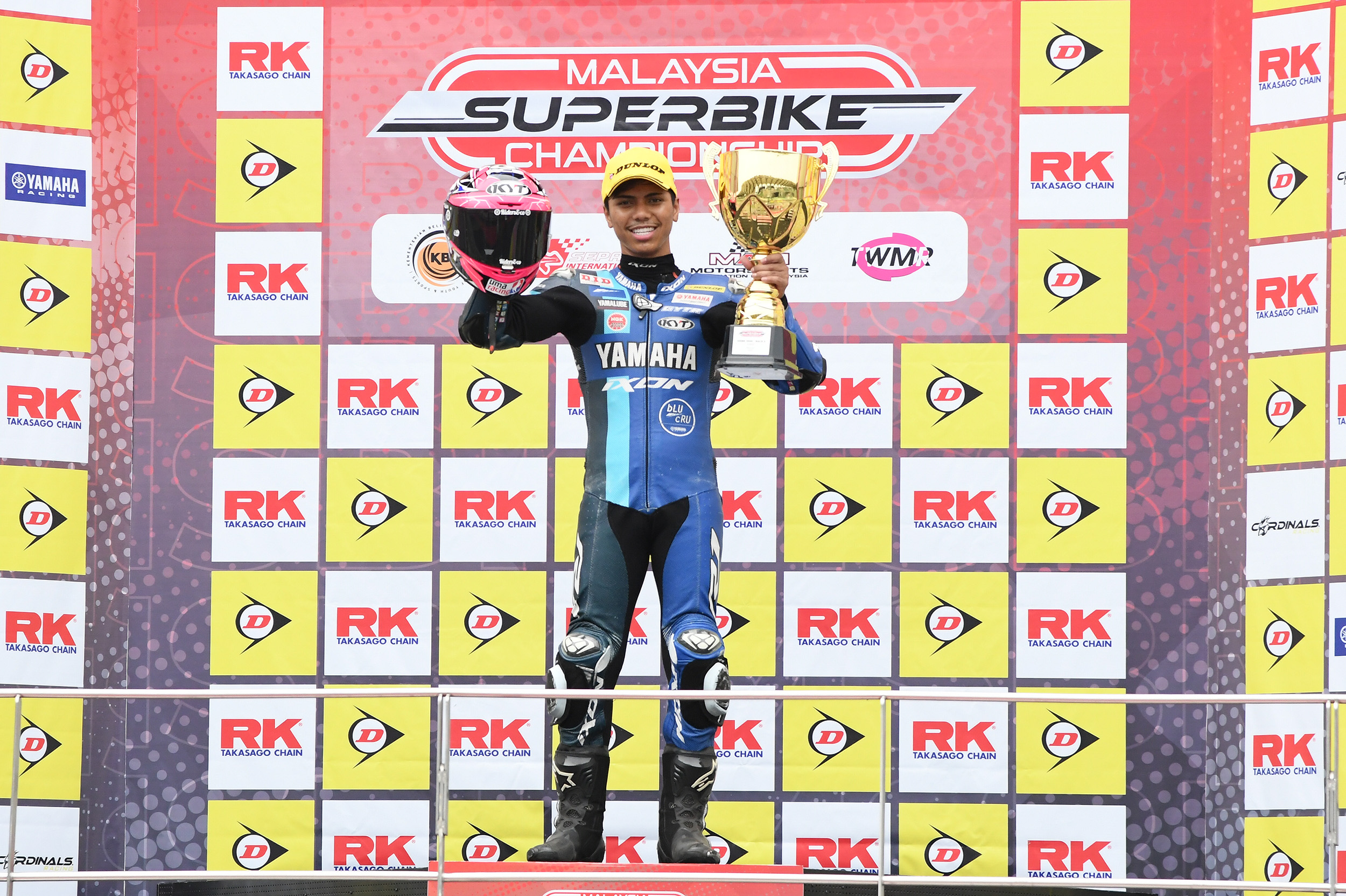 Kasma has definitely showcased an outstanding performance this weekend with a double win at first place and another win at the second. While Race 2 posed some challenges for him that bounced him off the first spot, Kasma made an immediate comeback in Race 3 that boasted his dexterity and fearless persona.

At Race 3, Kasma took the lead from the start and dashed right ahead leaving a huge gap which made it almost impossible for Azlan who was trailing to close it. Towards the last few laps, it was all about maintaining his pace with the hope that he would not encounter yet another mishap.

Commenting on the race, Kasma said, “I was merely managing my lap time. I tried to be consistent and more careful as I had issues with my tires in Race 2. I am definitely thankful to have won this race.”

Behind him, once again making it to the podium at the second spot was Azlan Shah Kamaruzaman of HORIZON RACING TEAM at 17’24:674s.

For the MSBK1000 B Class, Osama took home the Weekend Warrior Title when he obtained the most points in the last three races.

Osama put on a good show despite the technical issues namely the brakes throughout the races. He maintained his pace and held on to his position despite his contender closing in on him.

Throughout the 8-lap race, Osama showcased his abilities to manoeuvre his machine, making timely decisions that would not hamper his moves on making the best time. He clocked in at 18’24:819s.

Commenting on the race, Osama said, “We were really struggling this weekend with the machine. I had been facing a consistent brake failure. I crashed during the test on Thursday.”

“We tried many things on the brake to make it work but somehow it didn’t work very well so I had to change my braking styles where I was using only about 20% of it and keeping the rest for emergency just in case to avoid hitting anyone. So, the whole point is to improve and fight with the guys ahead of me, however I managed to get first place with the current situation of the bike. I will work on the brakes for the coming round and go all out!” 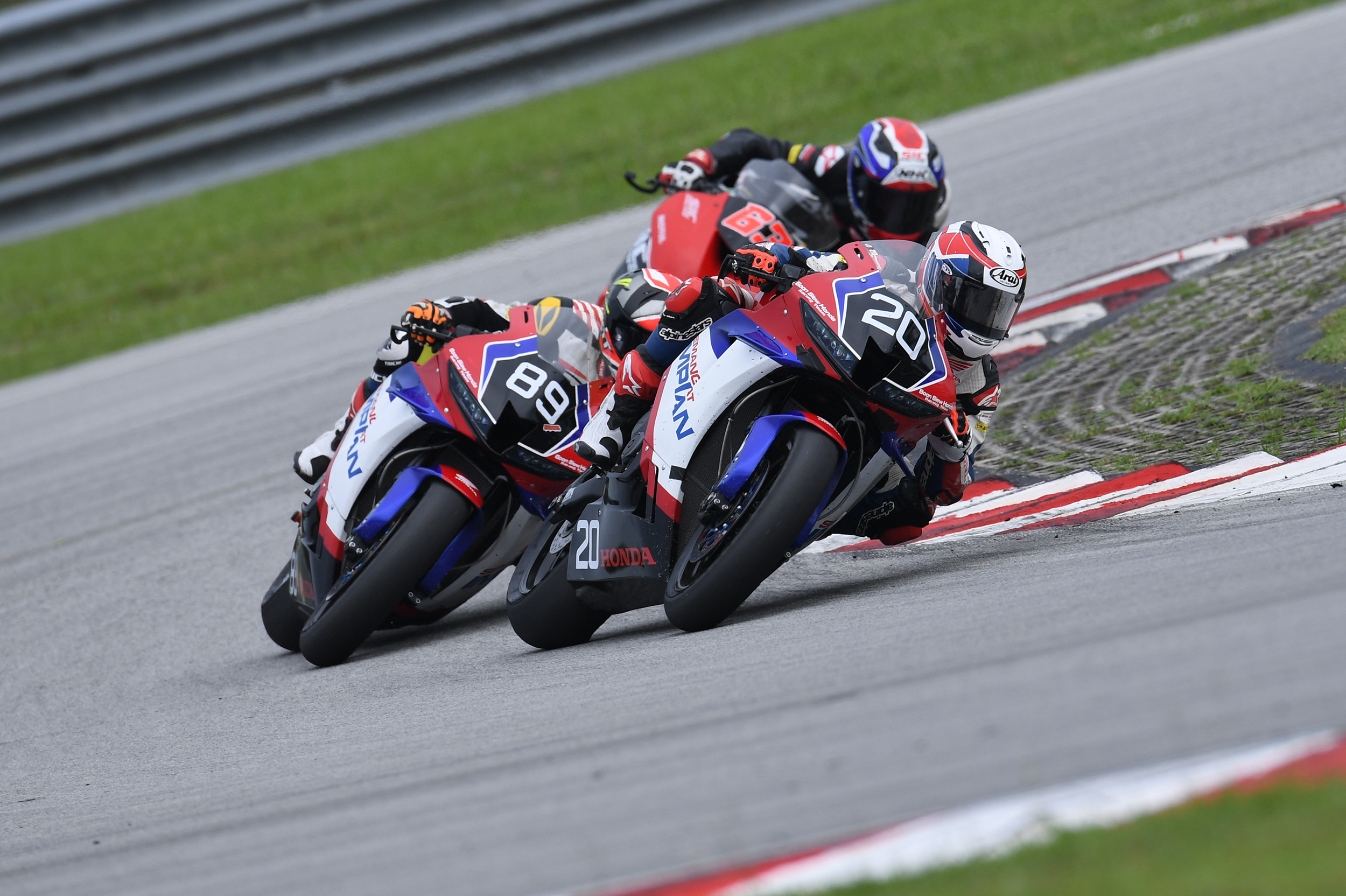 Azroy Hakeem Anuar bagged the top spot on the podium in Race 3, MSBK600 Class of the Malaysia Superbike Championship.

After two races, defeated by his teammate, Khairul Idham Pawi, Azroy finally took the win with a little bit of luck added to his technical dexterity and the speed of the CBR600RR machine.

While in the first few laps, KIP was confidently making his way at P1, Azroy found strength to overtake him mid race. That did not stop KIP from continuing his pursuit to get back into P1. Towards the second last lap, KIP took control of his momentum and took the lead once again; however, the battle continued between the duo at the turns.

As the race became heated up, KIP lost control of his bike amidst trying to break into P1 but very quickly regained his momentum just before his rear tire gave way. Azroy bolted ahead as KIP was forced to slow down.

Commenting on the race, Azroy said, “It was a good race and as much as I wanted to win this race, I was a little sad that my teammate didn’t make it to the podium. We will try again for sure and do better for the next round.”

Grabbing the opportunity to make it at second and third were the duo of SIC RACING TEAM, Muhd Ibrahim Mohd Norrodin and M Danial Syahmi A Shahril who clocked in at 22’00:499s and 22’01:520s respectively. 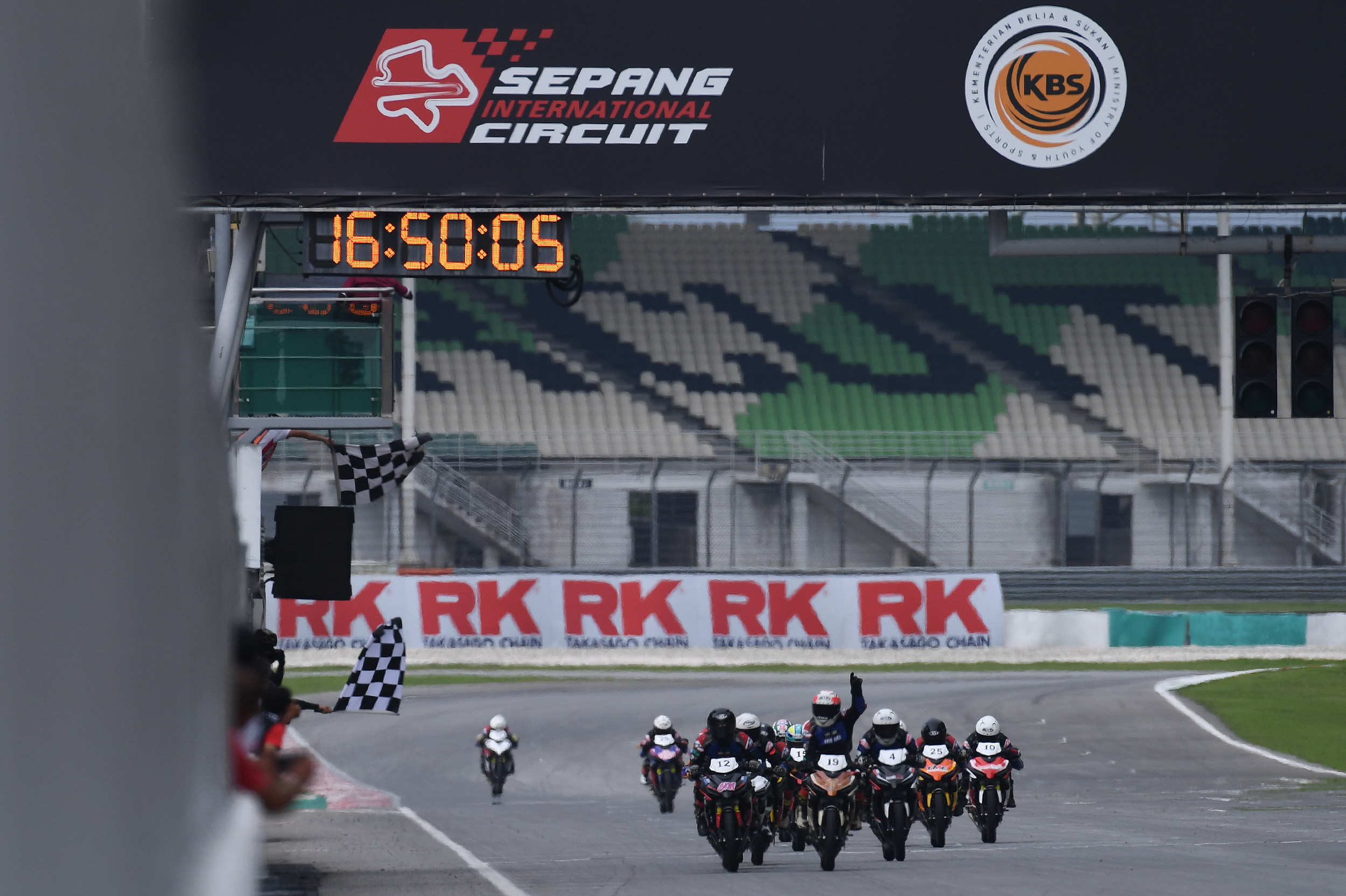 FARISH CREATES HAT-TRICK IN ROUND 1

It’s a hat-trick for M Farish Hafiy Farid Sezli of SIC RACING TEAM when he completed the Round 1 of Malaysia Superbike Championship in Race 3, MSBK250 A Class with yet another win at the first place.

Farish flaunted extraordinary skills on the circuit aboard the Kawasaki Ninja 250 when he took lead and bolted ahead of the trio trailing him to find their pace.

While Farish confidently glided his way, guarding his position as he picked up speed, the group of three riders behind him were fighting a challenging battle to take the lead. Muhammad Irfan Haykal Amidi of BOON SIEW HONDA RACING TEAM who took the last spot on the grid was seen moving his way up to the top four position as soon as the race flagged off.

Among him were Emil and Farres, teammates who were working hand-in-hand to defeat Irfan. However, Irfan did not falter. While he made some mistakes in the last few laps, he managed to regain his momentum as he continued the feat with the duo of SIC RACING TEAM.

Meanwhile, Farish was on his way to completing his race and just as he crossed the finish line at 20’19:050s, Irfan bolted ahead of Emil and Farres, taking the second spot at 20’24:642s.

Commenting on the race, Farish said, “I began with a strategy in mind. The strategy was to get ahead of the troop and take the lead with a wider gap. I worked on it and it succeeded.”

As for the MSBK250 B Class, Muhammad Fauzi Hassan takes the Weekend Warrior title when he completed Race 3 with the highest points.

Yesterday, Fauzi obtained the highest points in Race 1. While he bounced one spot down in Race 2 this morning, he proved his determination to succeed when he picked up speed and pushed himself back up in Race 3.

Throughout the race, Fauzi was seen to have defended his position quite well. He maintained his momentum from the start till the end.

Commenting on the race, “I am truly happy with my win and it is a big thank you to my team members and family who have been a great support system to me.”

The highly competitive feat came to a close when Fareez took the lead in the last two laps before heading towards the finish line first. Fareez did not make it to top three in Race 1 however he made a significant improvement in Race 2 when he pushed himself all the way up from the 8th spot on the grid.

Fareez was seen grappling with his speed throughout the race. In lap 3, Fareez managed to break out of the troop and take the lead only to fall back into P7 in lap 4. However, Fareez did not fall to defeat. He managed to pace himself up and by lap 5, he repositioned himself in P1 before completing lap 6 with a victory.

Commenting on the race, Fareez said, “In the beginning, I just tried to get into the rhythm. But at the last corner, I pushed myself ahead and managed to take the win.”

Coming in at the second place was Muhd Faiz Khairul Azmi of SHENG KONG MOTOR logged in at 17’52:822s.

In third place, Abdullah Qayyum Abd Razak of LIANG SOON RACING UNION made it at 17’52:953s.