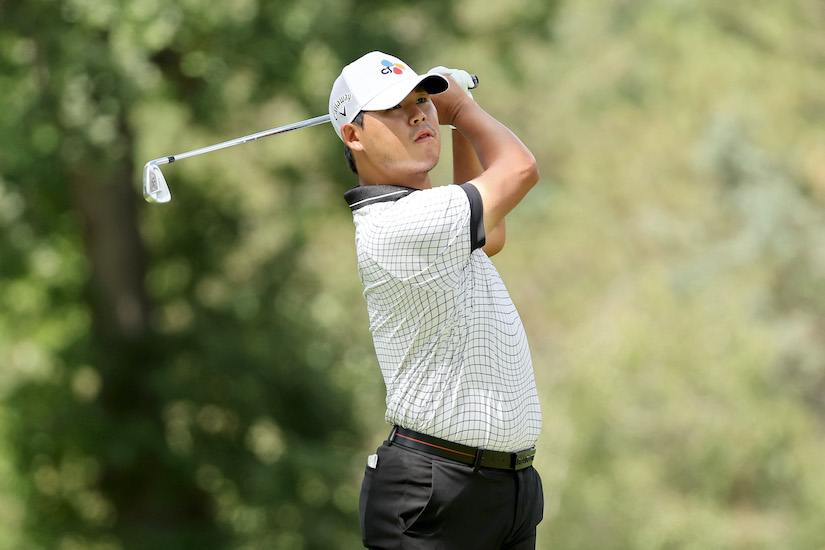 Korean star Si Woo Kim was kicking himself after losing ground on the leaders following the third round of the Rocket Mortgage Classic on Saturday despite a 4-under 68 keeping him in tied seventh place.

Kim, who is hunting for a fourth PGA TOUR victory, briefly challenged for the lead with an outward 32 at Detroit Golf Club but was pegged back by two late bogeys as he ended the day eight shots back of co-leaders Tony Finau and Taylor Pendrinth, who lead on 21-under 195. Cameron Young (65) is third on 17-under.

Finau, last week’s 3M Open winner, put himself on the brink of back-to-back PGA TOUR victories after firing a bogey-free 65 while Pendrith carded a 66.

“I started well on the front nine, but struggled a little bit on the back nine. I didn’t make over par coming in, so it is still good momentum that I can take into the final round,” said Kim, who currently ranks 50th on the FedExCup standings.

The 27-year-old Korean star started well with birdies at the first two holes before picking up further gains on Hole Nos. 4 and 8 for a blemish-free front nine. He got to 5-under for the day on the 14th hole but ended his round by sandwiching two bogeys with a birdie in the last three holes, including three-putting the last.

Although disappointed with his finish, Kim preferred to look on the bright side. He said he needed to improve on his putting if he is to finish the week well, which will also enhance his hopes of fighting for an automatic spot in the International Team for the Presidents Cup in September where he currently ranks 16th on the team standings.

“I think that my putting was not good on the back nine, which made things difficult,” he explained. “But I am still in good shape, so I think I still have a chance. If I start as well as today, I will keep focusing on my game and do my best and challenge for a win.”

Monday qualifier, K.K. Limbhasut of Thailand continued his inspiring run to put himself in contention for a top-10 finish in his only second PGA TOUR start. The 26-year-old carded a 68 after trading five birdies against a lone bogey to move up to T16 on 10-under.

Upcoming Korean Joohyung Kim staged a remarkable comeback after barely making the cut on Friday by firing a sizzling 66 to jump 35 rungs to T24 on 207 to enhance his hopes of earning a full PGA TOUR card after accepting Special Temporary Membership. “I didn’t play well yesterday, but I made that birdie at 18th and made cut,” said Kim, who finished an impressive joint-third at the Genesis Scottish Open earlier this month.

“I was so grateful I got the chance to play two more days, so I made my mind to play aggressive today. I think that mindset worked well. I played solid and started early in the morning, so I played without any wind which helped a lot. I can play well and play aggressive in this condition. I was a little disappointed with some putts, but I also made some good ones.”