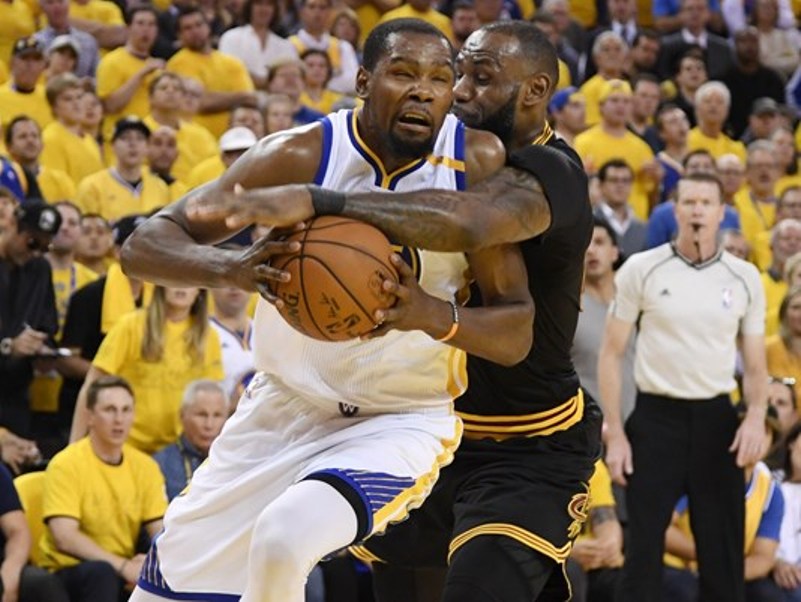 History of the NBA Finals rivalry between the Golden State Warriors and Cleveland Cavaliers. The clubs meet in their fourth consecutive edition of the best-of-seven championship series starting Thursday:

2015: The Warriors won their first title in 40 years by beating Cleveland 4-2. For the first time in NBA Finals history the first two games went to overtime. Kyrie Irving suffered a fractured left kneecap in overtime of the opener and missed the remainder of the series. After splitting the first two games in Oakland, Cleveland won at home 96-91 but in defeat the Warriors discovered how effective Andre Iguodala could be against the Cavs. He scored 22 points in game four as the Warriors won 103-82 and earned NBA Finals Most Valuable Player honors as Golden State won the next two games and the series. The Warriors were the first team since the 1991 Chicago Bulls to win the title without any prior NBA Finals experience on the squad. LeBron James became the first player to lead the NBA Finals in points, assists and rebounds with 35.8 points, 13.3 rebounds and 8.8 assists a game in the series.

2016: The Cavaliers brought their home city its first major sport championship since 1964 by winning the NBA crown for the first time 4-3 over the Warriors, who had set an NBA wins record in the regular season with a 73-9 campaign. The Cavaliers made the greatest comeback in NBA Finals history by rallying from a 3-1 deficit, becoming the first road team since 1978 to win a seventh game. In game four, LeBron James stepped over Golden State’s Draymond Green and was struck in the groin. Green was issued a flagrant foul and suspended for game five, which the Warriors lost at home. Warriors center Andrew Bogut suffered a left knee injury in game five and missed the rest of the series. James was a unanimous NBA Finals Most Valuable Player and became the first player to lead an NBA Finals in average points (29.7), rebounds (11.3), assists (8.9), steals (2.6) and blocked shots (2.3).

2017: The Warriors recruited free agent Kevin Durant in the off-season and roared through the playoffs, sweeping the first three series and taking a 3-0 lead over Cleveland before suffering their lone defeat, missing out on the first perfect 16-game playoff run in NBA history but still managing the best win percentage of any NBA champion with the 4-1 victory. Durant won his first NBA crown and was named the NBA Finals MVP. LeBron James became the first player in NBAFinals history to average a triple double in the top statistical categories with 33.6 points, 12.0 rebounds and 10.0 assists a game.