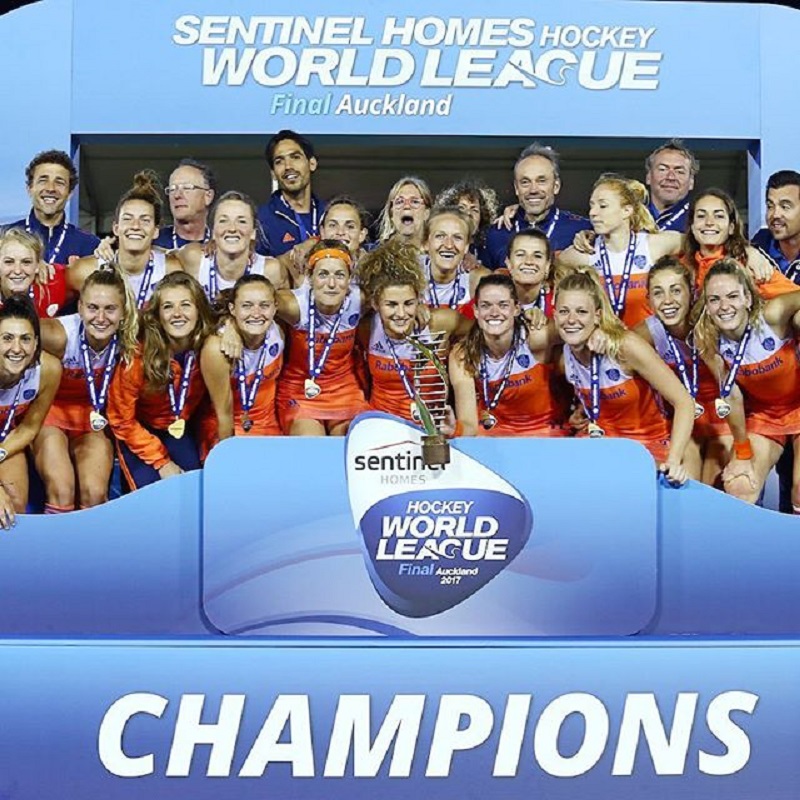 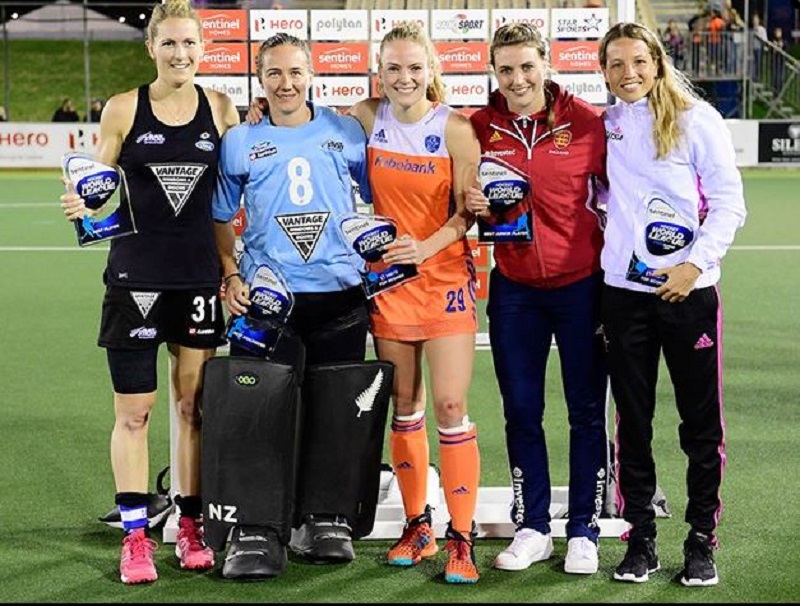 It was the dream fixture as host nation New Zealand took on the world number one side, the Netherlands in the Sentinel Homes Hockey World League Final.

For the Black Sticks to go one better than their 2015 silver medal, they would have to do what no other team has managed in Auckland – score against the staunch Oranje defence.

In the end it was an ask too far but the packed stands at the Harbour Hockey Stadium in Auckland were treated to a match of sumptuous hockey skills and really tough, uncompromising, top quality sporting action.

The Netherlands have been a side apart at this event and in this final there was no let-up as the team in orange showed a glittering array of hockey skills to take the title for the second time and cement their position as the number one side in the world.

During the course of the event, the Netherlands scored 18 goals and conceded none. For the Black Sticks, this has been a tournament that looked to be heading to disaster after some poor pool results but was saved by great performances in the quarter-finals and semi-finals.

It was a measure of just how tense things were at the start of the match as Carlien van den Heuvel showed an uncharacteristic lack of composure as she pushed Sam Charlton over after the two players came together in a messy tackle. Van den Heuvel was given a yellow card and watched much of the first quarter from the bench.

Back with the hockey, the first quarter was evenly matched as both teams tested each other. The action between the circles was characterised by attack and counter attack but neither side created any real scoring opportunities.

The second quarter saw a far more expansive game develop. Amy Robinson made a sparkling run for the Black Sticks up the right of the pitch but couldn’t get past the flat stick of Caia van Maasakker in the Netherlands defence.

Player of the Tournament Stacey Michelsen was the next player to test the Dutch defence but her run was stopped abruptly by a staunch Dutch defence after she had managed to beat three players.

Now it was the turn of the Netherlands to attack. Maartje Krekelaar thought she was through on goal but a brave point-blank block by Goalkeeper of the Tournament Sally Rutherford prevented the tournament’s joint top scorer from adding to her tally.

Kelly Jonker came close after Lidewij Welten had taken the ball to the baseline and slipped it back to her. The diminutive but combative forward found her shot brilliantly blocked by Brooke Neal on the line.

The breakthrough came for the Dutch seconds later when Jonker was able to nick the ball far too easily in the Black Stick’s circle. She scrambled the ball past Rutherford to give her side the lead.

Welten was beginning to hit top gear and it was the midfielder who created the second goal. She jinked her way through the field before slipping to Maria Verschoor, who moved the ball to her reverse stick and shot home to double the lead.

The Netherlands came out determined to increase their lead and, sure enough, just two minutes into the half. Laurien Leurink made it 3-0 when she benefited from an inch perfect pass from Marloes Keetels.

New Zealand are nothing if not a resilient team and, inspired by their captain Stacey Michelsen, the players tried to get some momentum. Shiloh Gloyne made a strong run into the circle and forced Josine Koning in the Dutch goal to make her first save. 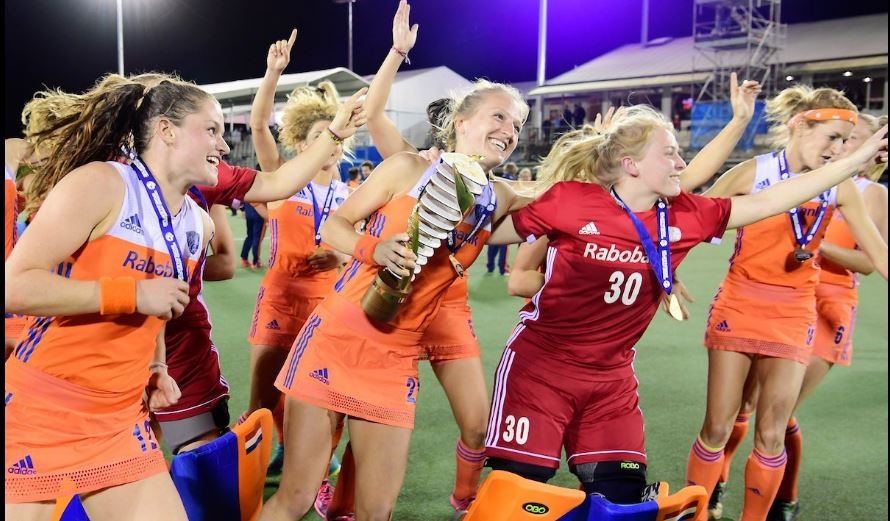 The forward won a penalty corner and the capacity crowd held its collective breath as the clever variation created confusion among the defence. Amy Robinson, positioned at the post, was millimetres from breaching the Dutch defence but her deflection went wide.

And so to the final 15 minutes. New Zealand kept probing but Netherlands held strong. While this team is glorious to watch when it attacks, so all the players are more than aware of their defensive capabilities.

There was a clear determination throughout the team that they were keen to maintain their tournament clean sheet.

With four minutes left New Zealand continued to attack and Netherlands conceded a penalty corner. A great shot from Brooke Neal was well-saved by Koning.

This proved to be the last chance for the Black Sticks to give their supporters something to celebrate but as the whistle went, the applause that rang round the stadium was as much for the hard-working Stacey Michelsen and her team as it was for the sumptuous skills of the new Hockey World League champions.

Marloes Keetels, the captain of Netherlands, said: “We can say that was a great team effort. You don’t realise while you are playing but on reflection conceding no goals is quite an achievement.”

New Zealand’s captain Stacey Michelsen said: “We had to be at our absolute best and I don’t think we came out playing at that level today.

I think we can take a lot of positives from this tournament and we are so close to the top three teams. It has been a great opportunity to host a tournament here, it has been an honour to play in front of such an awesome crowd.”

Tactical nous won out in the bronze medal match as Korea won their first Hockey World League Final medal with a composed victory over the world number two team, England.

In the opening quarter of the bronze medal defence, Korea continued to surprise as they defied their status as lowest-ranked team at the tournament to take the lead against England.

Korea’s goal came from a well-worked penalty corner variation. From the trap at the top of the circle, the ball was slipped left and Kim Jongeun was able to rip the ball into the corner of Maddie Hinch’s goal. England also lost their referral early in the game as they incorrectly questioned the goal.

For a team that had played the Netherlands in the semi-final only 24 hours earlier, Korea were playing with much energy in this game. At the same time, England were looking just seconds off the pace.

With the first quarter well underway, England won a penalty corner after a surging run from Lily Owsley. The shot was taken by Laura Unsworth but Sophie Bray’s deflection bounced away off the post.

England continued to probe the Korea defence – Owsley had a number of strong runs along the right and Sophie Bray made a run down the left but Korea’s centre held firm and the Asia team were happy to let England hold possession in the non-danger areas of the pitch.

As the half came to an end, England left the pitch wondering what it would take to break down the Korea defence. As Sarah Haycroft summed up as she left the pitch, “We have to create space and play with patience.”

In the second half, England immediately went on the attack. Erica Saunders made a run into the circle but was unable to find a teammate as Korea’s defence held firm. This was symptomatic of the whole team, a busy build-up but no end result.

With seven minutes left on the clock, England were camped in the Korea half but with no reward. A few minutes later head coach Danny Kerry removed his goalkeeper from the pitch to give the team a field player advantage. They were further helped when Park Seunga was given a yellow card.

It was a frantic last two minutes as England surged forward against the 10-woman defence. Hollie Pearne-Webb found herself in a rare shooting position as all 11 England players went on the attack.

Her shot flew harmlessly through the air past the goal and Korea lifted their arms in celebration as they realised that they had won a major global medal for the first time this century.

Captain of Korea, Kim Youngran, said: “This is the highest finish in an international tournament for us. It was an amazing match and I am pleased with how our team did. It was nerve-wracking but we didn’t have time to really think about it during the game. We got together and worked together and that led to our success.”

England’s captain Alex Danson contained her frustration as she said: “It was a very tight game and we showed a lot of grit and determination but there are some little details we need to work on, we learnt a lot today. Congratulations to Korea, they got a goal early and then kept us out.”