Japan’s Kei Nishikori will hope to use the Kooyong Classic starting today as final preparation for a run at a possible first Grand Slam title at the Australian Open.

The Asian ace, who has worked himself up to a record-setting fifth in the world rankings, claimed the Kooyong trophy a year ago over Tomas Berdych.

Nishikori is now a serious threat in every event he enters thanks in large part to a breakthrough 2014 season, sparked by his Kooyong win, in which he reached theUS Open final against Marin Cilic.

Though the Croatian won the title, Nishikori’s performance launched the 25-year-old into the tennis elite.

The semi-finalist at last week’s Brisbane International is the man to beat at the eight-player Kooyong event, which runs till Friday at the former home of the Open, the historic Kooyong Club in the tiny Melbourne neighborhood of Toorak.

The Japanese star begins with a match against local player Thompson, the world number 274 who won last month’s Australian Open wild-card playoff to earn a place in the Grand Slam main draw.

In other day one matches, Simon faces Verdasco, Dolgopolov takes on Krajinovic in a battle of young guns and Lopez plays Gasquet.

In the wake of his New York success, Nishikori kept up his winning momentum, claiming ATP titles only a few weeks later in Kuala Lumpur followed by a home triumph in Tokyo at the Japan Open.

And the crowd-pleaser announced his presence on the big stage with a semi-final place at the season-ending World Tour Finals in London, where he took a set off world number one Novak Djokovic.

The Florida-based Nishikori remains humble about his career, saying that any dream Grand Slam title is likely to come later rather than sooner.

“Winning might take some time, you need some luck too when you play,” he said in the run-up to Kooyong. “Hopefully it comes and one day I win a Grand Slam.

“That’s my dream, so hopefully I can do it in a few years.”

The event, whose past champions include Roger Federer, Pete Sampras and Andre Agassi, guarantees players three warm-up matches under identical conditions and surface as they will find at the Australian Open, which begins next week. – Agence France-Presse 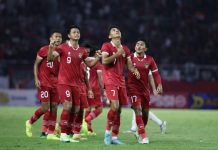