There will be no pressure on Timor Leste when they take on Brunei Darussalam in a two-match series of the Qualification Round of the AFF Mitsubishi Electric Cup 2022.

Timor Leste will play host Brunei DS on the 5 and 8 November 2022 at the Track and Field Hassanal Bolkiah National Sports Complex with the winning team getting the ticket for a place in the Final Rounds of the biennial championship.

Newly-appointed head coach R. Gopalkrishnan said that there is no pressure on the team to qualify where the emphasis would be more on giving a good account of themselves.

“There is no pressure on the team to qualify where we just want the players to do their best considering that we will be bringing a very young squad to Brunei,” said Gopalkrishnan, who took over the reins just three weeks ago.

“We spoke to the players on the sincerity of wanting to play for the country. So we have brought in some players from the Under-20 plus a few senior players. So the team will be quite young.”

Gopalkrishnan has been working with the FA of Timor Leste (FFTL) for the last three years as a Coaching Education Instructor.

And after taking over the U20 team at the recent AFC U20 qualifiers, he was asked to assume responsibility for the senior national squad as well.

“We do not know much about Brunei except that they recently played two friendlies in which they lost to the Maldives and then beat Laos,” he added.

“We have been training for the past three weeks where we played only two friendly matches against local clubs to test the team. For us, we just want the players to go out there and play with pride and to the best of their ability.”

For the record, Timor Leste have qualified three times for the Final Rounds of the AFF Mitsubishi Electric Cup – 2004, 2018 and 2020. 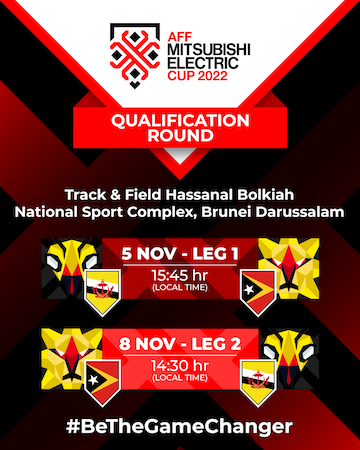