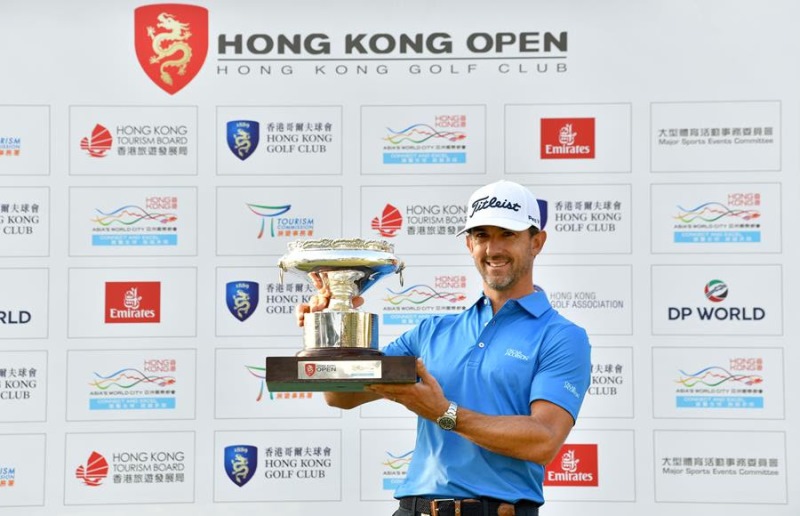 Australia’s Wade Ormsby won the Hong Kong Open for the second time when he cruised to victory by closing with a four-under-par 66 at the Hong Kong Golf Club on Sunday.

Unlike his first win at the Hong Kong Open in 2017 where he won by a single shot, Ormsby enjoyed a more comfortable victory as he triumphed by four shots over Major champion Shane Lowry of Ireland.

The Australian did not get off to the best of starts when he stumbled with an opening bogey. However, he recovered quickly with three consecutive birdies from the second hole before adding another on nine to take a five-shot lead at the turn then.

Ormsby birdied 11 but dropped another shot on 15 before another birdie on 17 effectively confirmed his wire-to-wire victory as he closed with a winning total of 17-under-par.

Lowry surmounted a late charge by storming up the leaderboard with a 64, having started the day six shots back of Ormsby in a share of ninth place. However, his gallant efforts were not enough to catch the Australian and he had to settle for second place.

Thailand’s Gunn Charoenkul enjoyed yet another top-10 finish as he posted a 69 to take third place while 2019 Asian Tour Order of Merit champion, Jazz Janewattananond carded a 68 to take outright fourth place ahead of American Tony Finau, who finished in fifth place after a 67.

Wade Ormsby (Aus) Fourth round 66 (-4) Total 263 (-17)
I’ve been working my guts out the last 14 to 15 months trying to take my game to the next level. And like I just said, Australian PGA three weeks ago, losing that one really hurt me so I’ll put a few changes in place. I worked out over the break and to come back here and get the win so soon, can’t put it into words really. It’s still nerve-racking coming down the stretch you know, like that 18th hole, it can do anything to you but I got the tee-shot in play and hit a weak iron shot into it but anyway. Four on the card and won by four, so I’m very happy. I was playing great, you always got to play the Hong Kong Golf Club the same way. The wind obviously changes but you still try and fly it to the same spot. Obviously didn’t get off to a great start, made a huge putt one and that kind of set the tone. After that, I felt good out there I just had to keep doing my thing because I knew I was playing really good. So yeah, I think the game plan was the same. When you get in front there’s no point in changing that, no point trying to play defensive. The guys had to come and catch me basically. I was hoping to win this season but to do it in week two of the year in my first event is special and it will be one I’ll remember forever.
I have three wins on the main tours in my career and this is my first wire-to-wire. I’m very proud of my play this week. Going through what I went through three weeks ago, that kind of hit me pretty hard. I didn’t even want to know the game for three or four days, but to come back and do what I’ve done this week, like I said, proud of myself and proud of my team.

Shane Lowry (Ire) Fourth round 64 (-6), Total 267 (-13)
I’m very happy with myself, fair play to Wade, he’s run away with it and didn’t really give us a chance but I went out there and did as much as I could. 64 around here is a pretty good score in these conditions. I got so much out of this week. I played some good golf and had a good time. I’ve got my whole team here, it was a really enjoyable experience. Hopefully I can come back some time soon. It’s a golf course I obviously didn’t have much success on in the past but I’m a different player than I was then, and I really enjoyed it this week. It’s a great golf course and a great place to play a tournament. Everything about Hong Kong and my week has been really good. I said to my caddy going down the last [hole] we need to start picking courses that suit me and I think this is one of the courses that suits me.

Gunn Charoenkul (Tha) Fourth round 69 (-1) Total 268 (-12)
Honestly, I felt the pressure. I started off good when I birdied the second hole and then a little mishap killed the momentum on the third. And then just kept burning the edge all day. Most of the time I didn’t hit it close, but I made a lot of good putts out there today and didn’t make one until 16.  I think I was a little mentally tired today as well. My legs gave out on me on a lot of holes so for next week, I got to go back and work out a little bit on my legs. I think they are a little stiff. Overall, I’m very happy with my game and really looking forward to next week. I’m really enjoying my time out there even though I’m not scoring anything. Winning will come when and when it’s time. So I just keep prepping myself out there and then when the time comes, I think I’ll take the win. A lot of great players are coming out here and I think it’s a good time for Asian Tour as well. Some of the top players in the world are coming. So I think that will push Hong Kong Open for next year and you know I really look forward to coming back.

Jazz Janewattananond (Tha) Fourth round 68 (-2) Total 269 (-11)
Although I did not win, it’s still a pretty good result as I left so many shots out there. I knew I was probably not going to win because Ormsby played really good and that’s a fantastic score. It’s going to be very hard to beat him here at this golf course. He’s won here before and now he’s a two-time time winner. There are a couple of things I need changing, so I’ll try to do it before next week. Hopefully I can repeat what I did last year next week. I really like to shake off my rust and I got a couple things to work with and we’ll see, I think it’ll definitely help for sure that I came here this week to play. So, looking forward to next week where it’s a course I really like I guess if you play good golf then good things will come, but if you don’t no one is going to talk about you. So just got to keep practicing and playing good golf.

Tony Finau (U.S.) Fourth round 67 (-3), Total 270 (-10)
Obviously a little salty taste, I got a double on the last. I knew I couldn’t have won the tournament so just tried to be aggressive and make a birdie but the wind changed on me in the middle of the air and my ball went in the water. But I’ve enjoyed my week here in Hong Kong, I put in a respectable showing. It was nice to play with Shane today, we had some good vibes going out there and overall I’ll look back on the experience and enjoy it for sure. I’ll be back eventually. I don’t know when, there’s no reason why I wouldn’t come back, the people have been great. If you guys can order up this weather then I’d be back every year! I’ve just enjoyed being here, I think it’s an amazing place. I didn’t know that much about Hong Kong until I got here and then it was surprisingly amazing. I’ve enjoyed my time and anyone that wants to visit, I’d highly recommend it.