Home 2020 Ormsby keeps his nose in front in Round Two of Hong Kong... 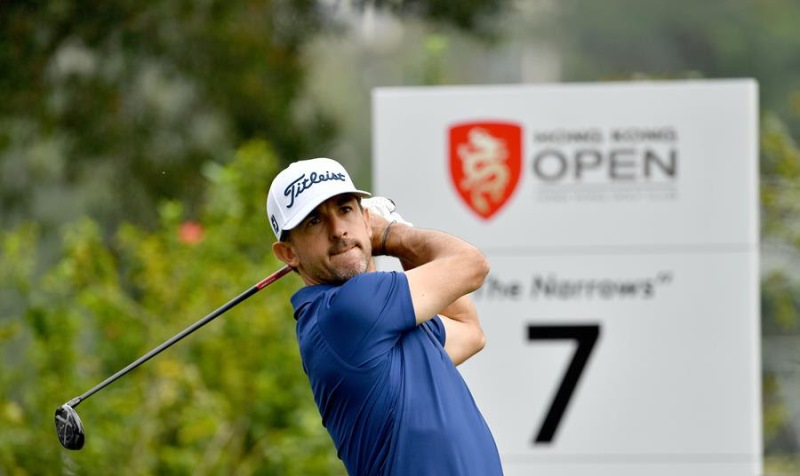 Australia’s Wade Ormsby held on to his lead when he returned with a second round four-under-par 66 to remain as the front runner at the Hong Kong Open on Friday.

Ormsby, the 2017 Hong Kong Open champion, is bidding to win the tournament for the second time and he showed his resolve by putting up another solid performance with his two-day total of nine-under-par 131 to stay two shots ahead of India’s S.S.P. Chawrasia.

Chawrasia, who led for three rounds only to relinquish his lead to Ormsby in the 2017 edition of the Hong Kong Open, is looking forward to redeeming himself after charging his way back into contention with a flawless 63.

Australia’s Travis Smyth continued to show his affinity for the Hong Kong Golf Club with rounds of 66 and 68 to stay firmly in the mix, bracing himself for more weekend action in his debut at Hong Kong’s oldest professional sporting event.

Smyth is tied for third alongside India’s Shiv Kapur and the Thai duo of Gunn Charoenkul and Jazz Janewattananond with their 134 total.

Philippines’ Angelo Que, who lost in a play-off to Australia’s Scott Hend at the Hong Kong Open in 2014, signed for a 68 to trail Ormsby by four shots in tied-seventh place after trading four birdies against two bogeys.

Major winner Shane Lowry of Ireland posted a 66 to join Que in a share of seventh place at the Asian Tour’s season-opening event in Hong Kong.

The weekend cut was set at one-over with 70 players progressing into the final two rounds.

Wade Ormsby (Aus) – Second round 66 (-4), Total 131 (-9)
I guess it’s a good thing being in the lead. You just got to get ahead and get them. I’m obviously playing well. I probably played better today than the way I did yesterday. Two bogeys and one of them was a bad hole but otherwise I played beautifully. Just a tough hole. We’re doing exactly the same in the weekend so just trying to be in control and that will be good enough.
It’s like this every day. You got to try and find the rhythm and find a fun way around it. I got a bit impatient early, made a couple of birdies and got a little bit slack on 17 but after that, I played really strongly all the way coming in so that’s the most important thing today.
You got to try not to get ahead in the game. I’m playing well and sometimes it’s tricky being in the lead but I will just keep trying to do my thing. I’m playing good so I have to try and stretch that. Probably half the field is playing pretty good and it’s all those guys who can putt good who can be in contention. That’s kind of what we’re saying until now that the margins between the first and last guy isn’t that big so everyone’s capable of winning. It’s just a matter of getting the game in the right spot at the moment.
I wanted to come to a golf course that fits my eyes. I had good vibes around here and I feel like I can get my game in good shape here. I love coming to Hong Kong. I love the golf courses here.

S.S.P. Chawrasia (Ind) Second round 63 (-7), Total 133 (-7)
I played good today. I made a couple of good putts and also my mental game was good today. I have very happy with my round. Two years ago, I went into the final round with the lead. Some good memories there. I remembered playing very good then. I didn’t finish well and missed out on the win. But I’m only two shots back now and two more days to go. I’m looking forward to the weekend and let’s see what happens. It’s a very good golf course. We play here every year. To be honest, I’m very familiar for this course. I’m looking forward to this week. A good result will give me the confidence I need heading into the season.

Travis Smyth (Aus) Second round 68 (-2) Total 134 (-6)
I’m playing good golf and I feel like I got the gist of this golf course now. So yeah, I’m looking forward to the weekend, You really have to position your ball well here and it’s like how you play golf in Australia too. It’s not a bombers’ paradise. The greens are awesome and I feel like I’m putting well so that’s probably the reason why I’m up there on the leaderboard. I just have to try and do my thing and see where I end up at the end of the week. I’m going to play pretty much the same way I’ve been doing. You’re almost forced to lay up on a lot of holes so you know I’m just going to keep trying to hit good shots off the tee and hit many greens and hold all the putts. At the end of the day, if you’re playing good golf, you get rewarded.

Gunn Charoenkul (Tha) Second round 67 (-3), Total 134 (-6)
I’m not really annoyed with that bogey on the last. I hit 17 greens today. I thought I wouldn’t miss one and then I did it on the last hole. At the start, I just kept burning edge for like six to seven holes and I was like here we go again. But after dropping one birdie on seventh, it just kept coming so I’m really very happy. Nothing really changed for me for the last 12 months. I just come out everyday telling myself oh today might be a bad day. I know it’s a bad mentality just to go into competing but it just reduced my expectations a lot and helps me stay relaxed out there. I guess that’s why I’m playing well. I came close to winning on the Asian Tour once but not twice and never really got it done. To have my first one would probably mean a lot and my baby’s coming so it would be great. It’s been two years since my last win so I would really love to win again.

Jazz Janewattananond (Tha) Second round 66 (-4), Total 134 (-6)
I’m pleased with a 66 today. We started off not bad, the weather was fine but the wind got stronger and stronger. I think we finished strong, given the conditions. I don’t want to think about the weekend charge yet. This is a new territory for me. I am making the cut in Hong Kong for the first time in a while, so we’ll see what happens. Usually I will know where the pins will be placed for the weekends for most courses we play and how it would be set up, but for Hong Kong Open, it will be new to me. Shane’s a nice guy. It was great playing with him. He tells a lot of stories about his wins and all that. It’s really good to hang out with people like him. It was a great opportunity playing with him.

Shiv Kapur (Ind) Second round 66 (-4), Total 134 (-6)
I am happy with the way I played given the blustery conditions yesterday morning and this afternoon. It’s been really hard to pick the wind out there. A lot of time you’re hitting from the middle of the green and trying to avoid the mistake just because you can’t be sure what the wind is doing. But overall, when you have a day like today where you go bogey free, you should be pretty pleased. I think you’ve just got to place the ball well. It’s a lot about the angles out here. There are a lot of holes that if you hit on the correct side of the fairway, you need to be coming into the flags from certain parts of the fairway. You can’t just blindly try and hit fairways because if you’re on the wrong side, it’s hard to wrangle. The course’s really well designed. It’s a short golf course and the greens are always the big defense out here. It’s been hard to get the ball close with the firm greens. I’m just glad the form is there and it’s not the other way. I had a bit of a rough start to the year last year but it’s nice to, you know, put yourself in contention in the first tournament this year. It feels like a bit of a continuation from the last season as I didn’t have much of a break so I’m glad to get right back into it.

Angelo Que (Phi) Second round 68 (-2) Total 135 (-5)
I’m always happy to be here, you know. I love this place, I love the course, love the food and love the country. I still consider that shot I hit on 18 as the best shot of my life even though I lost in the play-off to Scott Hend in 2014. I hit it to like within a foot from the left rough for a birdie and that’s why I always have great memories here. The layout of this golf course forces you to think about every shot you hit. You don’t just use one club every time, you got to think how to work your shots. And you got to hit good iron shots. I’ve been playing a lot in in Japan in recent years and unfortunately, age is now becoming like a factor like a tennis elbow that I’m suffering right now. Luckily, we have very great physios helping us out. And I’m just managing it now and hopefully in a few months they’ll be gone.

Panuphol PIttayarat (Tha) – Second round 67 (-3), Total 135 (-5)
I had a round today and yesterday. It was an up and down day today with bogeys and birdies but managed to finish in the red number. It’s nice and satisfying to be in the mix heading into the weekend. My goal this year was to hit more fairways and greens and I did that so it’s nice.
It’s a very narrow course but lucky it is not very long with a lot of irons and rescues off the tees. But still, it’s not easy to hit the fairway because we have some firm fairways this week.