Home International Porosity ahead at the halfway point 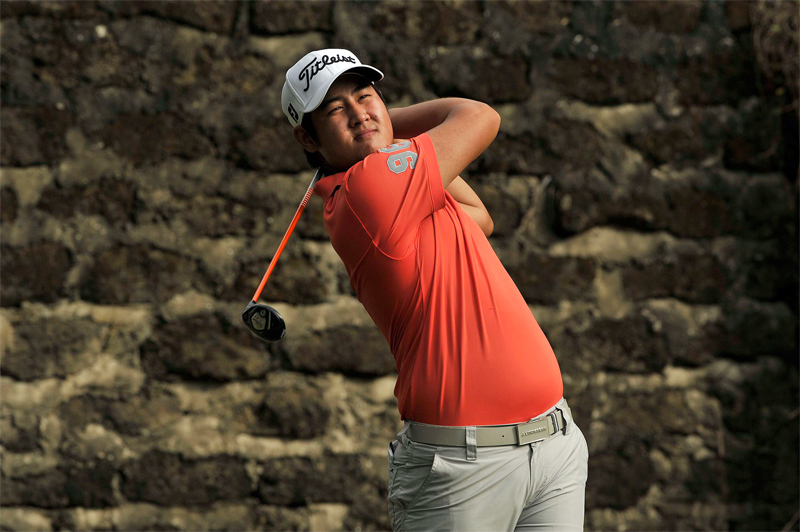 POOSIT Supupramai of Thailand took advantage of a hot start when he seized the halfway stage lead at the PGM Lada Langkawi Championship with an eight-under-par 64 on Tuesday.

The talented Thai birdied his opening four holes before adding one eagle and two birdies for a 14-under-par 130 total at the Gunung Raya Golf Resort.

Co-overnight leader Chan Shih-chang of Chinese Taipei trailed by one after shooting a 67 while Grant Jackson of England, who won his first ADT title last year, was a further shot back in third on 132.

Senroku Isa of Japan made huge strides on the leaderboard following a joint low round of 64 to sit in fourth place at the RM250,000 (approximately US$80,000) Asian Development Tour (ADT) tournament.

Poosit was delighted with his ‘perfect’ round after getting off to a fast start and adding an eagle-three on the eighth hole when his four-iron approach shot landed six feet from the hole.

A 40-yard chip-in birdie on the last, fuelled Poosit’s intentions to follow in the footsteps of his brother Sattaya, who won his first ADT title in the Philippines last year.

“I was driving the ball well and putted good. Everything in my game was perfect. The ADT is a good Tour for the next generation of golfers to fight their way into the Asian Tour. My brother won last year on this Tour and I would like to join him,” said Poosit.

Chan, who on the ADT in Sabah last year, continued his chase for a second ADT title after marking his card with seven birdies against two bogeys.

Shaaban Hussin (69) and Shaifubari Muda (68) were the best placed Malaysians after day two in tied ninth position, seven shots from the leader Poosit. The halfway stage was set at three-under-par 141 with a total of 50 players qualifying for the last two rounds.

This season, the ADT will reward the top five players on the final Order of Merit at the end of the season with playing rights for the 2015 Asian Tour season.

This will be a significant boost for aspiring professionals on the ADT as this represents the highest number of Asian Tour cards up for grabs since the ADT was established in 2010. Only the top three players on the final ADT Order of Merit for each season obtained their Asian Tour cards previously.

The ADT, which was launched in 2010 with five tournaments before growing to eight in 2011, 13 in 2012 and a record 16 in the 2013 season, has established itself as a successful platform for upcoming players to gain entry on the region’s premier Tour.