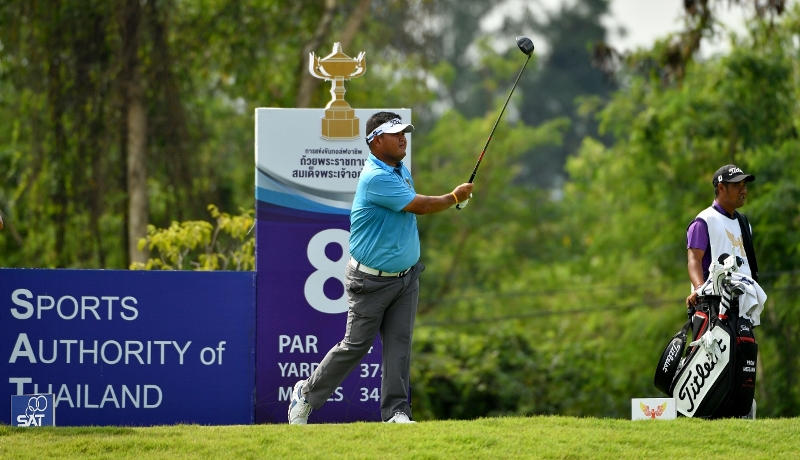 Prom Meesawat of Thailand shot a four-under-par 67 for a seven-under-par 135 total to share first place with Shiv Kapur of India after the second round of the US$500,000 Royal Cup.

The experienced Thai golfer was feeling very positive about his game from the first hole at the Phoenix Gold Golf and Country and he had the result to show for it. Prom carded three birdies and an eagle during the round.

The only blemish on his scorecard was a bogey on hole two. Prom put it down to bad luck as the wind picked up just as he hit the ball flush.

Shiv kept mistakes out of his game and carded a bogey-free 68. Similar to round one, he needed a few holes to get his game started. Things went on track for him after consecutive birdies on the sixth and seven. He would be happier to get an even lower score, but he’s satisfied with having the lead at the halfway stage of the tournament.

Lu Wei-chih of Chinese Taipei is two shots behind the leaders in lone third after carding a 69. He scored three birdies and turned in at 33 courtesy of some accurate approach shots. However, things did not go as well over his back nine (holes one to nine) as he made three bogeys. Although, he had an eagle on the sixth.

The entire field stays for the weekend as the Royal Cup is a no cut event. It is also the final event on the 2017 Asian Tour schedule.

It’s another good day for me as I didn’t make a lot of mistakes. The bogey that I had was just unlucky. I hit a good shot and thought about having a birdie chance at the hole, but the wind picked up and the ball flew over the hole.

I played well after the turn, as I birdied the fifth and eagle the sixth.

The sixth is good for long hitters. This time, the wind helped me drive the ball farther down the fairway. I approached with a 7-iron and the ball landed over the bunker and rolled onto the green. I then putted in for eagle from 25 feet.

Over at the back nine, it’s tougher and firmer, so you have to control your distance very well.

It’s a tight leaderboard, so everyone’s still got a chance. This course is short. If you can read the green well, you can go low on this golf course. For myself, I’ll just go out and enjoy the weekend.

I was bogey-free today. I kept the mistakes off the card. I felt that I had a slow start as I didn’t give myself birdie chances in the first five holes. I ground out a few pars, made a birdie on the sixth and a good birdie on seven. I got going after that.

I thought the conditions were much tougher today. The winds picked up and the greens got firm. The greens were pretty fast as well. Over at the back nine, I was just hanging on and trying to avoid the mistakes.

Overall, if you’re leading the tournament, you can’t be too unhappy. Hopefully, I can handle it better tomorrow and give myself a few more chances. I also hope that the course stays tough because I like it to be tough.

I started the round feeling really prepared. I hit my second shot well, which gave me birdie opportunities. The greens here are rather sloppy, so it is very important to land in an ideal position. I got into some trouble at some holes at the back nine because I failed to do that.

At the sixth where I eagled, I drove to the right side of the fairway, which offered a good line to the green. My second shot was also well hit. My putt needed to go up a slope before flattening out towards the hole. I was surprised to sink that putt, but nevertheless, I was very happy about that.

Over the weekends, like what I’ve done previously, I’ll just focus on my golf swing. I’m making adjustments to make it better.

Scores after round 2 of the Royal Cup being played at the par 71, 6764 Yards Phoenix Gold GCC course (am – denotes amateur):