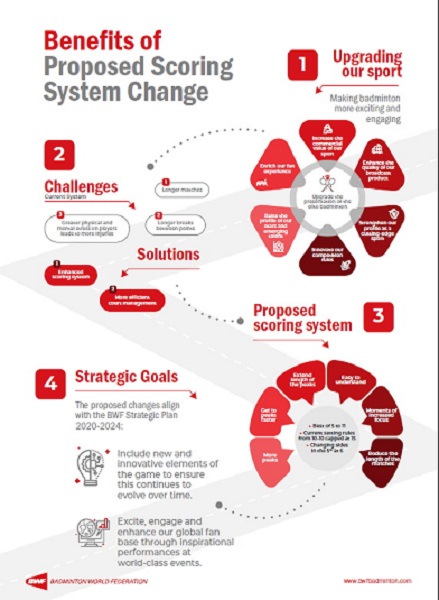 BWF Council decided to express its support for this proposal as it aligns with the objectives of the BWF Strategic Plan 2020-2024 to:

▸ Include new and innovative elements of the game to ensure this continues to evolve over time.

▸ Excite, engage and enhance our global fan base through inspirational performances at world-class events.

What you need to know?

▸ Not to be introduced until after the Tokyo 2020 Olympic and Paralympic Games.

Background of the 5×11 system

The proposal for a new scoring system was first articulated by the BWF Council in March 2014 as it was felt that matches were getting longer, while the shuttle was in play for much shorter periods than earlier.

At the Council Session in Montego Bay, Jamaica, in November 2017, the proposal to implement the 5×11 system was discussed, presenting feedback from broadcasters.

The proposal was put to vote at the BWF AGM in May 2018 in Bangkok, and while it received 129 votes in favour and 123 votes against, it was not passed as it required a two-thirds majority of 168.