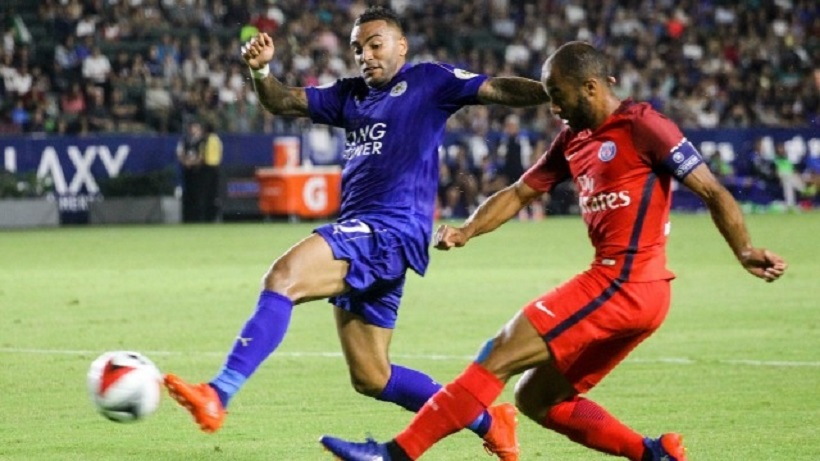 A sell-out 25,667 crowd at the StubHub Center was treated to passages of sumptuous midfield interplay as PSG gave the naive Foxes a taste of what to expect at Europe’s top table as they head into their first Champions League campaign.

PSG attacked relentlessly, playing neat triangles in midfield and looking to play mercurial Uruguayan striker Edinson Cavani in through the channels while Javier Pastore whipped in dangerous crosses from the left.

The threat was largely cancelled out early on by captain Wes Morgan and his center back partner Robert Huth, with goalkeeper Kasper Schmeichel having little to do.

But PSG got the breakthrough in the 26th minute when Daniel Amartey clumsily brought down Jonathan Ikone in the area and Cavani sent Schmeichel the wrong way from the spot.

Leicester clawed their way back into the play with several promising attacks, including a stinging free kick from Algerian star midfielder Riyad Mahrez which PSG keeper Alphonse Areola just kept out.

But “les Rouge et Bleu” doubled their lead seconds before half-time when Thomas Meunier, who scored twice in the last ICC fixture against Real Madrid in Ohio, surged into Leicester’s box on the counter.

The 24-year-old Belgian international, who moved in the close season from FC Bruges, played a neat assist to Ikone, who slotted the ball in off the bar and beyond Schmeichel.

Foxes boss Claudio Ranieri and his opposite number Unai Emery made 17 substitutions between them, largely taking the tempo and purpose out of the second half.

It was over as a contest just after the hour when Maxwell sent in a cross from the left, which Lucas Moura was able to nod in after peeling away at the far post.

Substitute striker Odsonne Edouard rounded off the rout moments before the final whistle when he found himself one on one with Schmeichel, and slotted the ball clinically into the back of the net.

Emery took over Qatar-backed PSG last month from Laurent Blanc, who won the domestic treble twice in a row but failed to make substantial progress in Europe.

Emery indicated earlier on Saturday that a swoop for 23-year-old Real Madrid forward Jese Rodriguez was “a possibility” before the end of the transfer window.

Asked if he was looking to bolster the squad further, the Spaniard said he was “very happy with the team — with the experienced players but also the young players.”

“To be able to perform, to have a good season, we do have a big team capable of doing that,” he added.

He didn’t mention Jese by name, but said that “other players could join in attack perhaps — that is a possibility.”

Ranieri said that although the result didn’t go Leicester’s way, the team had gained valuable experience ahead of its first European campaign, although the priority was the Premier League.

“The focus is to be safe and then, if it’s possible, to get experience. It’s the first time in Leicester City Football Club’s life that it is in the Champions League,” he said.

“It’s amazing. With a lot of respect, we will try to do our best.” – Agence France-Presse