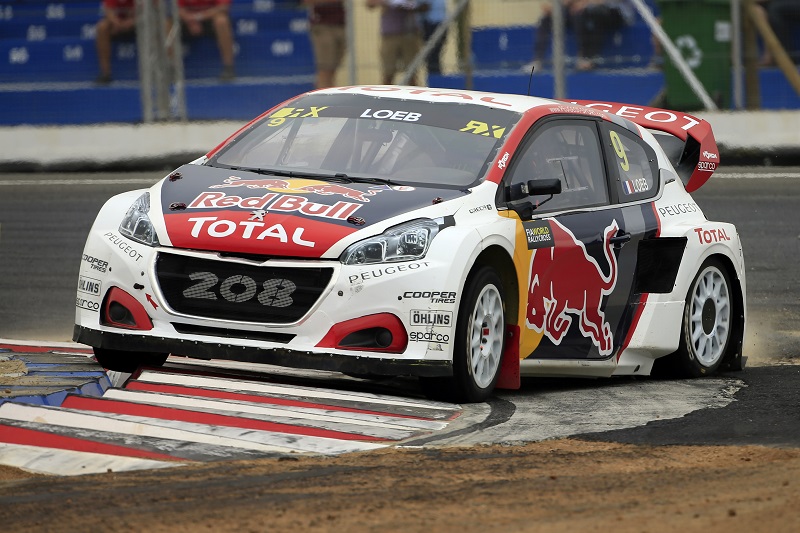 Team Peugeot Hansen collected its tenth podium finish of the 2017 FIA World Rallycross Championship at the last round in South Africa to become the year’s Teams’ vice-champions*.

The last round of the 2017 World Rallycross Championship, which took teams to Africa for the very first time, saw the PEUGEOT 208 WRX deliver a competitive performancefrom start to finish, including a memorable lightning start in Q4.

TimmyHansen hit the ground running to win Q1, Q4 and his semi-final, but he missed outon the weekend’s victory by just tenths of a second despite losing time in thebustle through Turn 1. The young Swede recovered to collect a tenth podiumfinish for the PEUGEOT 208 WRX from 12 starts this year, while Team Peugeot Hansen put the seal on secondplace in the year’s Teams’ standings. Timmy himself placed fifth in the2017 Drivers’ championship.

It turned out tobe a frustrating weekend for SébastienLoeb, however. After being pushed out of contention in Q1, he picked up apuncture on the opening lap of Q2 and was consequently unable to show his truepotential in qualifying.

That said, his hopes of recovering ground in hissemi-final got off to a promising start when he emerged from Turn 2 in second spot.Unfortunately, another puncture prevented him from reaching the final, but hecan still look back at a season which saw him bag seven top-three finishes andfourth place in the 2017 Drivers’ points table.

Kevin Hansen produced another strong run in his PEUGEOT 208WRX 2016, including third-place finishes in Q2and Q4. His start from the outside lane in his last qualifying session islikely to be remembered for some time to come. A penalty for Ken Block earnedhim a place in the final for the second round in a row and his excellentweekend enabled him to gain a place in the Drivers’ standings to conclude theyear in eighth spot, just ahead of Block!

“We were competitive fromthe outset and Timmy won both Q1 and Q4. We had our sights firmly set onvictory at this stage and all three of our cars reached the semi-finals whichturned out to be something of a battlefield. Neither Sébastien nor Kevin managedto show their true speed in the opening lap, but Timmy went on to win the raceand Kevin’s result earned him a slot in the final, too. Our hopes of winningwere still very much intact but Timmy was pushed during the opening corners andmissed out on being first past the flag by less than a second! That’s sofrustrating. All the same, we are very pleased to have come second in the 2017Teams’ standings. All year long, we gave it the best shot our resources allowed.”

“I think South Africawas one of our best performances this season. We were really competitive and Icame first in Q1 and Q4. It’s the first time this season that I won two qualifyingheats. My semi-final was very close and I was pushed quite hard through thefirst turn. I found myself facing the wrong direction going into Turn 2, noseto nose with Sébastien. Even so, I managed to win my semi-final. The first lapof the final itself was pretty virile, too. I fell back a few places so I did myjoker lap very quickly. After that, I did everything I could to claw background and I missed out on the win by just a few tenths of a second. It wouldhave been so nice to have won today. The PEUGEOT 208 WRX is the best car I haveever driven and to have finished the season without winning a final is sofrustrating. Nevertheless, I am pleased with my season and I think I have becomea more consistent driver.”

“From my point of view, the last round of the season was a big disappointment, especially as my car wasreally competitive! Things didn’t go my way in qualifying: I got baulked in Q1 andI punctured on Lap 1 in Q2. I fared better in Q3 and Q4, and then my semi-finalgot off to a good start because I was sitting in second place behind Timmy beforeI picked up another puncture during a bit of jostling. After that, I was nolonger able to fight for a top result. It was a frustrating way to end what wassomething of a frustrating year. Roll on next season!”

“I was quite pleasedwith my results in qualifying, even though I could perhaps have done even betterin Q1 and Q3. I got away to a tremendous start in Q4 which enabled me to win myrace and end up third in that heat’s standings. Unfortunately, I don’t reallyunderstand what happened in my semi-final. The first few turns were absolutemayhem. All I know is that I was up to third at one point and that I was backdown in sixth place just a few turns later. After that, I had a transmissionproblem but I managed to reach the final when Block took a penalty. Mymechanics did a good job to get my car ready in time and it was great to beable to take part in the final for the second time in a row. Even though my transmissionfailed, I was very pleased with the potential I showed at the season’s lastround.”

* Subject to confirmation of the official results by the FIA (Fédération Internationalede l’Automobile).