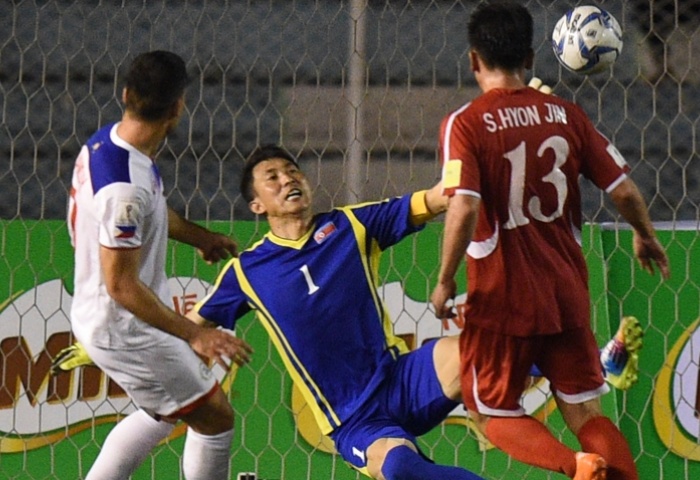 Philippines’ match-winner Iain Ramsay claims it was the ‘Filipino spirit’ that saw his side come from behind and claim a dramatic 3-2 win over DPR Korea in Tuesday’s 2018 FIFA World Cup/2019 AFC Asian Cup joint-qualifier.

Having been the ones to draw first blood at the Rizal Memorial Stadium through Misagh Bahadoran’s opener, it then looked as though Philippines were headed for defeat as the North Koreans reversed the deficit with goals from So Kyong-jin and Ri Hyok-chol either side of halftime.

But with five minutes remaining, Manuel Ott equalised for the hosts before Ramsay struck (pictured) after being picked out unmarked inside the box by Javier Patino, completing a stunning come-from-behind victory.

The shock result moved Philippines above Bahrain into third place in Group H of the joint-qualifiers, which was enough to see them seal an automatic berth in the third round of Asian Cup qualifying.

While it was his strike which sparked off wild celebrations amongst the 7,350 fans that had turned up, Ramsay insists he would still be feeling as overjoyed had it been one of his team-mates who popped up with the winning goal.

“I think regardless of who would’ve scored for the team, it would still be a great feeling,” said the 28-year-old midfielder, according to the Philippine Daily Inquirer.

“It’s always a nice feeling to score the winner, given the circumstances we were in, as well as us being up against a tough opponent.

“I’m happy to score the goal, but I’m just as happy to come on in the second half, contribute, help (the team) fight to the very end and get the win.

“A lot of people thought we’d probably lose that game.

“It might be a cliché but we showed the Filipino spirit. What got us the win today (Tuesday) was the character we showed.

“We kept on believing that we’d get something out of the game and we did.”

Azkals coach Thomas Dooley believed his players had extra motivation from the fact that it was veteran defender Juan Luis Guirado’s last game before international retirement, and claims they should now have confidence that they can match it with Asia’s big guns.

“We didn’t want to lose,” said the former United States captain. “Not at home and not on Juani’s (Guirado) final game.

“I like the outcome of the game and the words written on our shirts: We Believe.

“That was the main thing before the game; that we can believe in ourselves that we can (play) football against teams at this level.”

Philippines came extremely close to qualifying for the previous Asian Cup in 2015 but lost to Palestine in the final of the last edition of the AFC Challenge Cup, which back then saw the winners earn a berth at the continent’s premier tournament.