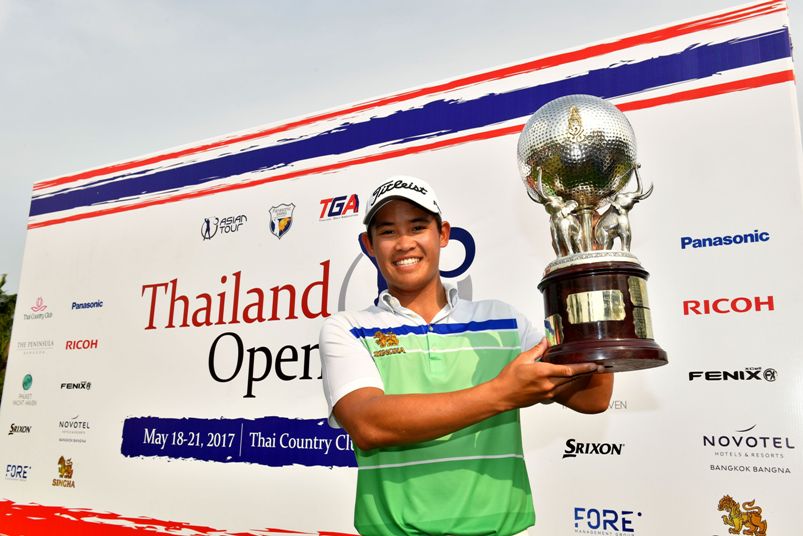 Young Thai Rattanon Wannasrichan completed a sensational wire-to-wire victory at the Thailand Open, closing with a four-under-par 67 to win by two shots for his maiden Asian Tour success on Sunday.

The baby-faced 21-year-old, who held a one-shot lead heading into the final round, kept his composure to return with a round of five birdies against one bogey and a winning total of 21-under-par 263 at the Thai Country Club.

Despite stumbling with a bogey on the last, Rattanon managed to hold off the combined challenges from Indian duo Shiv Kapur and Gaganjeet Bhullar, who settled for second place, in the US$300,000 event, which returned onto the Asian Tour schedule this week following an eight-year lapse.

Kapur, who was chasing for back-to-back wins, sank four straight birdies in his closing five holes to pile the pressure on Rattanon before signing for the day’s best score of a 63. Bhullar, a seven-time Asian Tour winner, impressed with a birdie-birdie finish after chipping in from 35 yards on the 18 to close with a second consecutive 67.

Thailand’s Panuphol Pittayarat battled to a 70 to finish four shots back in fourth place while compatriot Danthai Boonma grabbed fifth on 268 following a bogey-free 66.

Reigning Order of Merit champion Scott Hend of Australia marked his best efforts of the week with a solid 64, finishing in sixth place on 269 alongside three other players, including Thai star Kiradech Aphibarnrat, who closed with a 70.

The final round of the Thailand Open was delayed for two hours and 45 minutes in the morning due to heavy rain and lightning threats. Play commenced only at 10am local time.

The Thailand Open, inaugurated in 1965, is also the first leg of the newly launched Panasonic Swing, which provides a bonus pool across five designated tournaments.

I am very happy to win my first Asian Tour title at my own National Open! I played solid again today and just focused shot by shot. Nothing different from the last three rounds. I waited five years (since turning professional in 2012) for this win. I am really proud of myself. I finally proved that I can do it.

I was just trying to hit as many fairways as I can. I managed to keep my composure out there and not let any pressure get to me. I had a perfect game today. I putted really good as well. I just want to concentrate on my game and have fun out there. I told my caddy, Ken, the same too. We were just trying to enjoy ourselves out there.

My target was to get to 22-under-par total as I think that would be safe to secure the win. I unfortunately bogeyed the last to settle for 21-under-par but thankfully I still manage to win. I saw the leaderboard on the 15th hole and I knew Shiv (Kapur) was making a charge. I told myself I have to par the remaining holes and not make any mistakes.

I managed to birdie the 17 and that gave me some relief heading into the last. This win gives me a lot of confidence in my game now and I will try to get as many wins as I can in the future. I can’t wait to celebrate with my friends and family tonight! My parents are here today and they walked with me on course.

I think putting was the key to my victory this week. I really putted very well. I just keep smiling out there. I felt very happy. I guess that helped lightened my mood and I was able to avoid thinking about the pressure of winning.

It was disappointing to miss the birdie to get to 20-under but I am not complaining with a closing 63. I played a great round of golf. If you told me I would shoot a 63 at the start of the day, I would have taken it.

I drove the ball well in the first three rounds to put myself in a good position into the final round. My putter was what pushed me to a tied-second place finish today. I made a few long putts as well.

I was actually telling my caddy coming down the 18th fairway that I birdied the 18th hole with a similar pin position when I won my first Asian Tour title here in 2005. We were hoping to make an even better shot this time but unfortunately I wasn’t able to make the putt. It was still some good memories out there.

You can’t be winning every week so if I am able to put myself in contention every week, I will be very happy. The turning point for me was on the birdie on 14. I dropped a shot earlier on 13 and thought I needed to gain back in the last few holes. I managed to make four in a row from 14 which was great. I went from being in tied-ninth to threatening for the lead!

It was a great finish with two consecutive birdies to grab a share of second place. I played so well and I thought at the end of the day, I will either win or finish inside top-five. I am very happy with the way I played. It’s been very special.

I hit the ball well and it was a great week all over. I had two chip-ins today, including one from 35 yards on the last. It was a great moment. The other chip-in was on the par-three third. I missed the green on the right and chipped it in from the fringe. It was a difficult chip. I gained a lot of momentum from there. Short game was the key for me throughout the week.

I played really good. I missed a lot of really short putts but still shot seven-under. It’s a lot of confidence for me as I prepare for the BMW PGA Championship in Wentworth next week. Hopefully I can continue to play well in the next few weeks in Europe.

It was really hot out there. It’s probably the hardest conditions that I have played in a while. I was absolutely exhausted. I had a great birdie on my last hole ninth. I hit the driver to the middle of the fairways and made a good putt. That got me into top-10 and I am happy to finish the round with a birdie.

I rushed here to play as soon as the tournament was confirmed. It’s nice to sneak into the top-10 this week. It’s nice to get some world ranking points and hopefully try to break into top-50 in the world.

It’s always great to be playing here in Thailand. The more tournaments we have here, the more it will benefit the local professionals. I enjoy playing here than the other hottest conditions that I have played in other parts of the world.

Scores after round 4 of the Thailand Open being played at the par 71, 7097 Yards Thai CC course (am – denotes amateur):