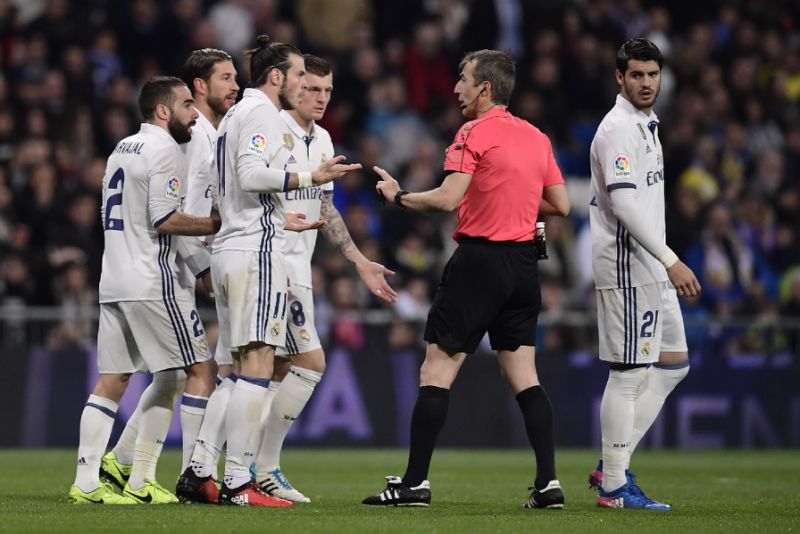 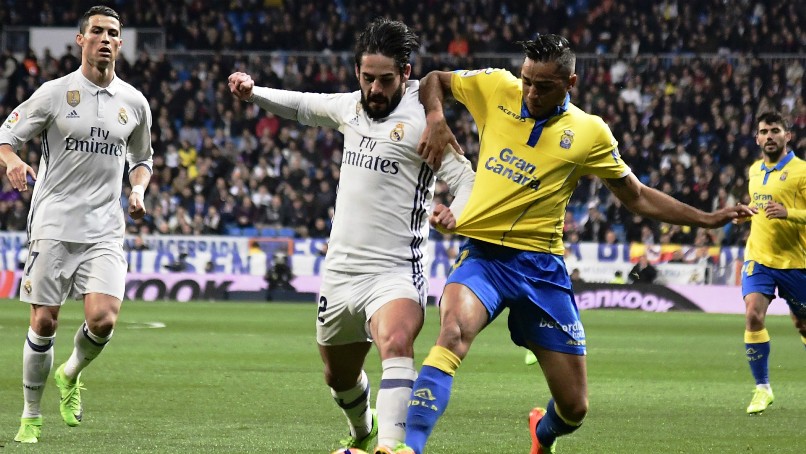 Gareth Bale complained he had been harshly treated after the first red card of his Real Madrid career cost the European champions in a thrilling 3-3 draw at home to Las Palmas on Wednesday.

Bale kicked out at Jonathan Viera twice before finally pushing the Las Palmas midfielder to the ground early in the second-half with the scores level at 1-1.

“I don’t believe that it was deserving of a red card,” the Welshman told Real Madrid TV.

“I was shown the yellow for the foul, I was then pushed and I just pushed him back.

“I want to apologise to the team and the fans. I hope to learn from my mistake”.

Madrid looked set for a first home league defeat in a year as Las Palmas took advantage of Bale’s dismissal to lead 3-1 with just three minutes remaining through Viera and Kevin-Prince Boateng.

However, Cristiano Ronaldo’s double salvaged a draw that keeps Real just a point adrift of league leaders Barcelona with a game in hand.

“What we can do is improve our performance. We are not happy with how we are playing.

“There are moments in the season like this. The past three or four games things haven’t gone as we would want, but we are not going to look for excuses in the referees.”

Madrid vice-captain Marcelo said Bale is aware his moment of madness had badly let his teammates down.

“I am not one to give him a clip round the ear, that is what I do to my children,” said the Brazilian.

“Bale is old enough to know if he has made a mistake or not.

“These things happen in football, but hopefully it doesn’t happen again between now and the end of the season.”

In a recurring theme of Madrid’s season, a stunning late effort undid a lot of the damage caused by a below-par display.

The European champions trailed Villarreal 2-0 on Sunday before a rousing fightback in the final 25 minutes sealed a 3-2 win.

However, having also lost 2-1 at Valencia last week after conceding twice in the first 10 minutes, Zidane insisted Los Blancos can’t always leave themselves with a mountain to climb.

“We can’t go over the top. There are things we have done well this year, but we have to analyse it and we will change things,” added the Frenchman.

“We have shown we have character and we can do more. We have to improve particularly in our first-half performances.

“We have to think about the positives. We will analyse the negatives, but to come back from 1-3 to 3-3 is a huge effort.”

On the same night that Barcelona coach Luis Enrique announced he will not continue next season, the Catalans have the fate of the title in their own hands for the first time in months.

A 6-1 thrashing of Sporting Gijon earlier on Wednesday saw Barca leapfrog Madrid into top spot and the two sides are still to meet at Real’s Santiago Bernabeu in April.

However, Zidane rejected suggestions Madrid are in danger of throwing the title away.

“We are going to fight. When there were good moments and we were leaders, I always said we would have difficult moments.

“We are not leaders, but the league is still open and we are not going to give up.

“You win leagues at the end (of the season) not now.” – Agence France-Presse