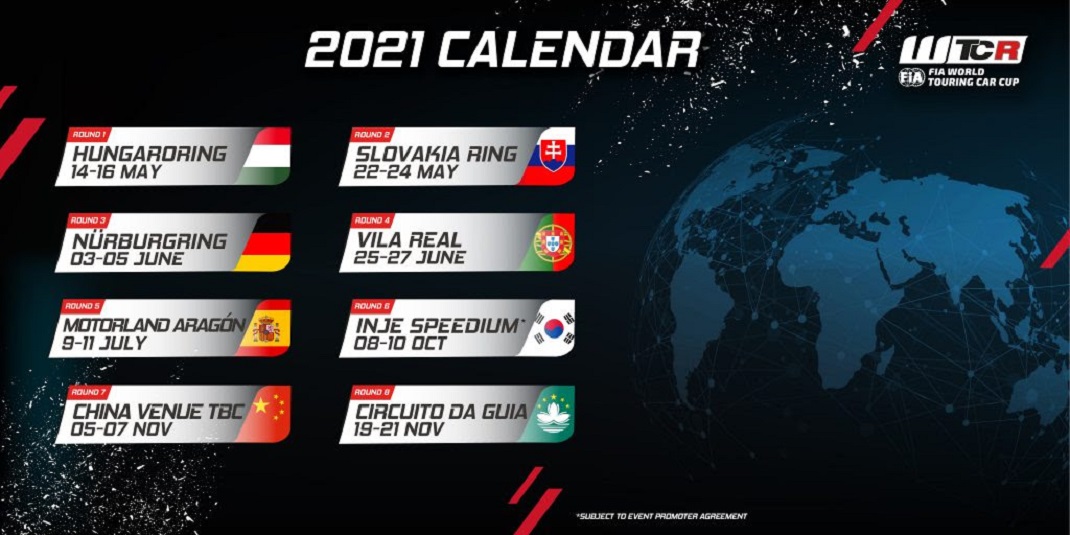 The WTCR − FIA World Touring Car Cup is gearing up for a return to Asia next year as part of a more traditional calendar.

After the 2020 season was based entirely in Europe in response to the COVID-19 pandemic, promoter Eurosport Events is working in close partnership with the FIA, the various national ASNs and Official Logistics Partner DHL, to include three race weekends in Asia on the schedule, which has received FIA World Motor Sport Council approval.

The events in China, Macau and South Korea are dependent on restrictions affecting worldwide travel and freight movement being eased. However, if they do get the green light then it will mark the WTCR’s return to a region synonymous with FIA World Touring Car racing.

First up Europe on 2021 schedule
The 2021 season is set to begin at the Hungaroring in mid-May followed by races at Slovakia Ring, Nürburgring Nordschleife, a return to the Vila Real street circuit in Portugal and MotorLand Aragón in Spain, which is hosting the 2020 title decider this weekend.

By waiting until May to schedule the season opener, it is hoped that as many fans as possible will be given the chance to attend events, albeit in line with local restrictions.

The Hungaroring and Slovakia Ring events are scheduled one week apart for logistical budget savings due to their close proximity.

South Korea kicks off planned Asia leg
It is planned the Asia leg of the series will begin at the Inje Speedium in South Korea in October followed by events in China and on the streets of Macau in November. While the venue for WTCR Race of China is still being finalised, Macau’s return as the venue for the traditional grand finale to the season will be eagerly anticipated.

Two for 2021
All WTCR weekends will be made up of two races rather than the current three as part of ongoing efforts to implement cost-saving measures. By racing twice rather than three times, consumable and car component usage is reduced. However, with eight weekends planned, the successful 16-race format adopted in 2020 remains.

François Ribeiro, Head of Eurosport Events, WTCR promoter on the 2021 calendar
“Together, Eurosport Events and the FIA did a good job within these unprecedented times to deliver the WTCR 2020 season, ensuring continuity of the series and support to the teams. Still, 2021 will be another challenge where cost efficiency shall dictate most of our decisions to make sure everybody stays onboard, and that WTCR still offers a great racing environment and global promotion at an affordable budget for our teams.”