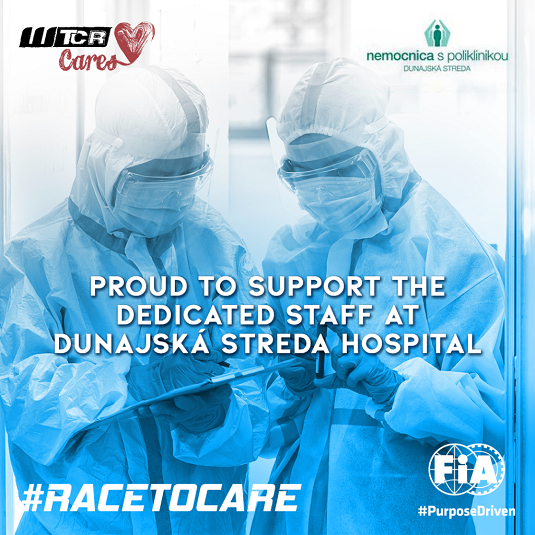 The WTCR − FIA World Touring Car Cup’s #RaceToCare campaign continues to help in the fight against COVID-19 after it made a donation of €15,000 to the Dunajská Streda Hospital in Slovakia.

Using funds generated through its ‘€1 per racing kilometre’ initiative, plus donations from WTCR drivers, WTCR promoter Eurosport Events is making a considerable financial contribution to a hospital located close to each circuit hosting rounds of the WTCR in 2020.

Following a recommendation from the Slovakia Ring, the Dunajská Streda Hospital in the town of the same name was chosen as the latest beneficiary of the WTCR’s extremely important initiative, which is aiming to raise €100,000 by the end of the season in the fight against COVID-19.

Yann Ehrlacher, the leader of the WTCR − FIA World Touring Car Cup ahead of this weekend’s deciding rounds for the Cyan Racing Lynk & Co team, explained why he and a number of his racing rivals are supporting the #RaceToCare campaign.

“This year is not like any other racing year,” Ehrlacher said. “The global pandemic has changed everybody’s lives and if I’m back on track it’s thanks to all the men and women of the healthcare organisations around the world. The FIA WTCR family wanted to do something to say thank you and that is why we have created the #RaceToCare programme because it’s now our turn to care.”

Esteban Guerrieri, who has more WTCR wins than any of his rivals and is second in the standings for ALL-INKL.COM Münnich Motorsport, said: “The FIA WTCR family wanted to do something to say thank you so for each kilometre on track I will also donate one euro to the campaign.”

What is the WTCR’s #RaceToCare?
In support of the FIA’s #PurposeDriven movement to return to racing with a clear purpose, WTCR promoter Eurosport Events will donate €1 for every kilometre completed by every all-season driver in every qualifying session and race in 2020. Drivers and other members of the WTCR community, plus stakeholders will be offered the opportunity to make similar donations with the goal of raising €100,000 by the end of the season. For more information on the WTCR’s #RaceToCare programme go to: https://www.fiawtcr.com/race-to-care/. To find out more about the FIA’s #PurposeDriven movement and the call to action, go to: https://www.fia.com/news/fia-purposedriven-movement