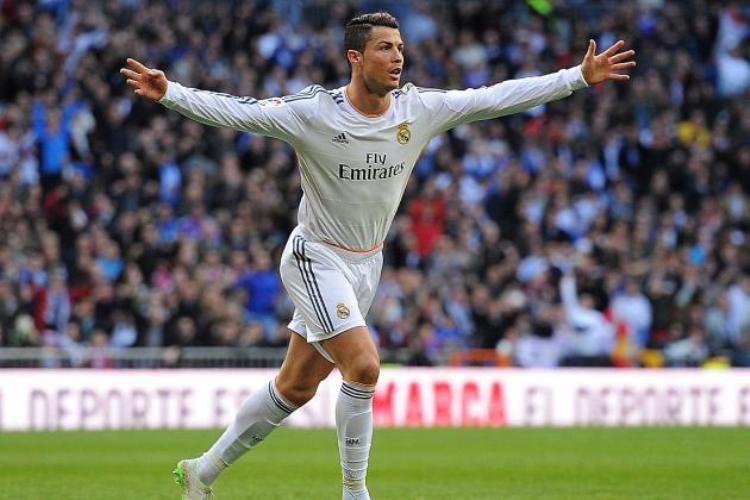 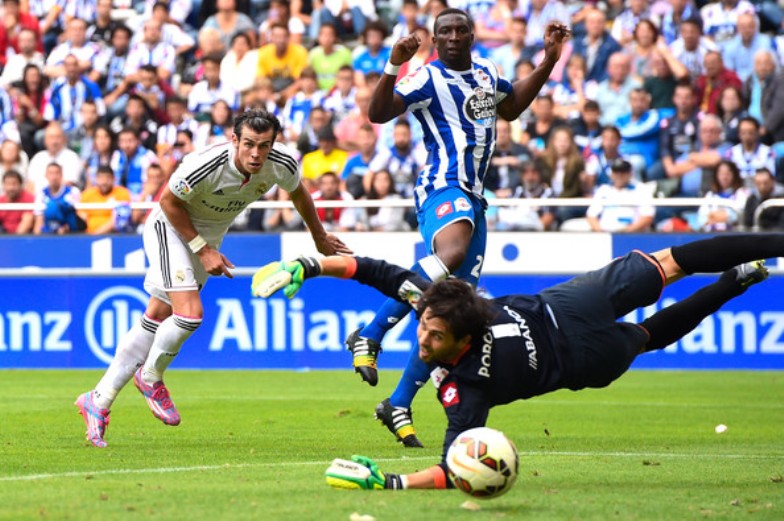 Cristiano Ronaldo scored a hat-trick as Real Madrid equalled their biggest ever away win in La Liga with a 8-2 thrashing of Deportivo la Coruna on Saturday.

Real now trail second-placed Atletico Madrid by two points after the champions missed the chance to go top as they were held 2-2 at home by Celta Vigo.

Ronaldo opened the scoring with a fantastic header from Alvaro Arbeloa’s cross, but the Portuguese was upstaged by James Rodriguez and the Colombian doubled the visitors’ advantage with a sumptuous left-footed effort that curled into the top corner.

A goalkeeping howler from German Lux then allowed Ronaldo to fire into an empty net to make it 3-0 before the break, but Depor did manage to pull one back when Haris Medunjanin converted from the penalty spot after Sergio Ramos was adjudged to have handled.

Gareth Bale struck twice in the final 25 minutes before Ronaldo rounded off his hat-trick to ensure Real bounced back in style after suffering consecutive defeats to Real Sociedad and Atletico Madrid in their last two league outings.

Toche headed home a late consolation for the hosts, but Javier Hernandez rounded off a fine day for Real when he volleyed home his first two goals for the club since joining on loan from Manchester United.

“The game was defined by the skill and quality we have up front and how clinical we were with the chances we had,” said Real boss Carlo Ancelotti.

“We showed the quality we have. We have a phenomenon in Ronaldo and we have other players with great quality. They combined very well together and that was the best thing we can take from the game.”

Depor’s resistence was broken just before the half hour mark as Ronaldo leapt to meet Arbeloa’s cross and directed a fine header into the far corner from 15 yards out.

Karim Benzema then forced Lux into another smart save moments later, but there was nothing the Argentine ‘keeper could do nine minutes before half-time when Rodriguez scored his first goal in La Liga with a curling effort that dipped in off the underside of the bar.

Lux was badly at fault for Real’s third goal, though, as he raced off his line to close down Benzema and despite bringing down the Frenchman, referee Pedro Jesus Perez Montero allowed play to continue so Ronaldo could double his tally for the afternoon by rolling the ball into an empty net.

Deportivo were given a glimmer of hope at the start of the second-half as Ramos was harshly penalised for handball and Medunjanin sent Iker Casillas the wrong way from the penalty spot.

However, Real put the game to bed 24 minutes from time when Marcelo played in Bale on the left side of the area and this time he finished via the far post to register his third goal of the season.

Bale produced another moment of quality to make it 5-1 as he flicked Isco’s through ball over Lux with ease before Ronaldo collected Rodriguez’s pass and powered the ball home with his left foot to complete his hat-trick 12 minutes from time.

Deportivo snatched a consolation six minutes from time as Toche headed home, but Real fittingly had the final word as Hernandez made his case for a start at home to Elche in midweek.

The Mexican international thumped a volley into the top corner two minutes from time before seeing his next effort loop of a stray Depor defender’s leg and over the hapless Lux.

It was a more frustrating night in the capital for Atletico as they were held for the second time in four games this season.

The hosts were shocked 19 minutes in when Pablo Hernandez produced a moment of genius to backheel Carles Planas’s cross past Miguel Angel Moya.

Diego Simeone’s men had to rely on their efficiency from set-pieces to dig themselves out of trouble as Miranda prodded home Koke’s free-kick before Diego Godin powered home a header from Gabi’s corner to lead before the break.

However, Celta were level once more eight minutes into the second-half when Miranda was adjudged to have clipped Planas inside the area and Nolito slammed home the resulting spot-kick.

Celta ‘keeper Sergio Alvarez had to make a fine save to deny much-maligned Atletico striker Raul Jimenez, who also had a goal rightly ruled out for offside.

And Atletico were foiled by the offside flag again in the last action of the game as Alessio Cerci was denied a fairytale ending to his home debut.

“I think the team had enough chances to win the game comfortably,” said Atletico captain Gabi.

“We were found wanting with our finishing, but we need to keep working. We are annoyed because you can’t let points slip away at home.”  – Agence France-Presse