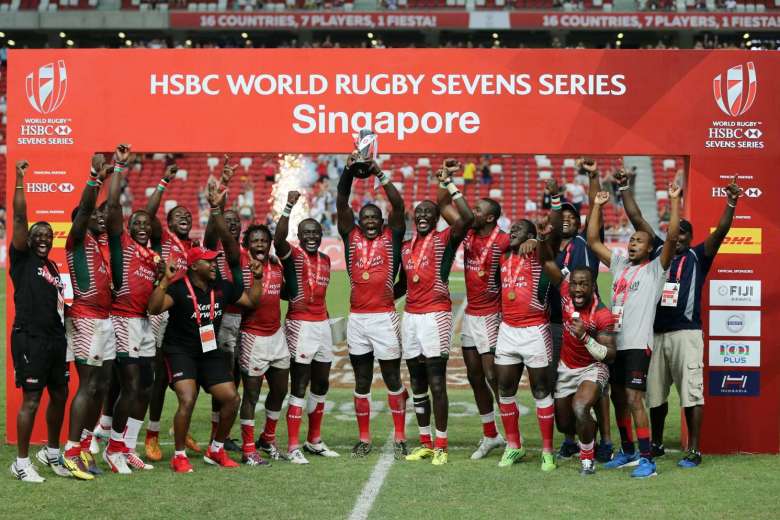 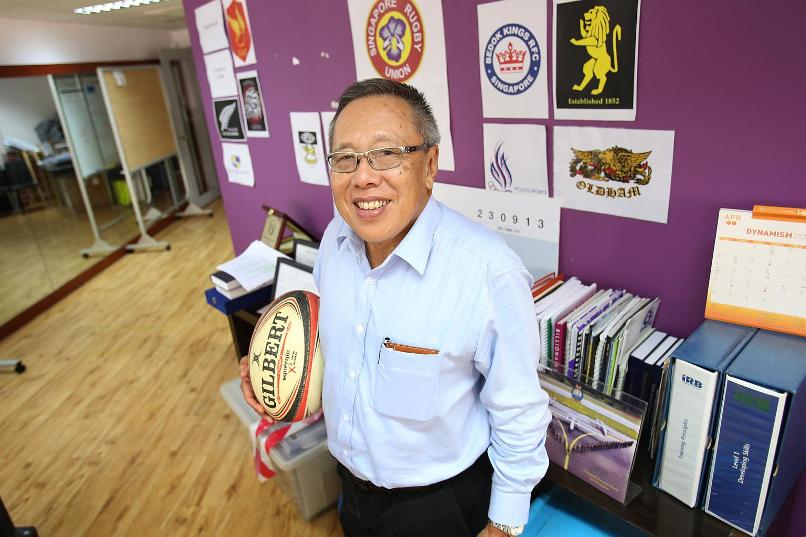 FOOTBALL may well take a back seat in Singapore as rugby, with its “ruck, rock and rumble” global culture may well bring on a new oval-ball version of the “Kallang Roar” at the Sports Hub.

As the Football Association of Singapore (FAS) struggles to get its house in order and Sundramoorthy’s Lions on a worrisome starting block for next week’s Suzuki Cup, the Singapore Rugby Union (SRU) is set to steal the thunder.

Definitely their trumpcard is what the FAS sorely lacks: A grassroots leader, who can build a relationship and fire up a leadership at the helm. Mr Low Teo Ping,  the 71-year-old retired merchant banker and former representative halfback, looks set to take a daring, yet cheeky, snipe down the blindside to revive the oval-ball’s version of the “Roar”.

He knows sports at the back of his hand. He wears so many sporting hats, you wonder if he should be Minister of Sports!

He’s probably born with an oval-ball in his mouth, say close friends, as he has fired up the ambitions of the Singapore Rugby Union (SRU) in recent years. As the organisation’s president, he is three years older than the union itself.

Bottom line: He knows that a thriving rugby sevens tournament needs a thriving British expatriate or colonial culture, visitors willing to invest in the experience, and the capacity to slake thirsts and hunger at will.

“We had a history of playing against teams from the (Commonwealth) armed and naval forces, but the expat community has changed,” he says in an interview with The New Zealand Herald.

“It used to be predominantly British, Australians and New Zealanders, now Indians, Americans, Canadians, Europeans and Japanese have morphed it quite a bit. We must evolve to include our ‘local nationals’ in the sport.”

Mr Low is pragmatic of his longer-term challenges. He says they’re competing with more than rival codes to push rugby’s case.

He says: “We’ve got 30 per cent participation at primary school and 20 per cent at secondary school, but we’re up against shopping centres, laptops and phones. An urbanised society like Singapore is very much exposed to the bright lights and beautiful things in shop windows.

“There’s a tendency to get distracted. Why should kids want to sweat it out on a rugby field? That’s our biggest challenge. We bid for the sevens tournament so we could re-popularise the sport.”

But Mr Low knows the formula has worked for Hong Kong since 1976. If you build a quality footy spectacle, create a glamorous destination and stock your bars and restaurants, the regional rugby-heads will come.

Just like the nocturnal Formula One race that made millions of heads turn when Singapore switched on the floodlights for the super-sonic cars, he knows revitalising rugby tend to take one of two forms: Either a “boys weekend” or – the GDP-friendly version –  with families for a spot of shopping and tourism to boot.

The Low-inspired SRU recognises this timeless equation. The city regained its place on World Rugby’s sevens circuit in April 2016 and emulated Hong Kong with a “ruck, rock and rumble” mantra. Mind you, the same methodology has worked in Dubai, Cape Town, London and Wellington.

Now, why not Singapore with an oval-ball mania?

The crystal ball offers good past, present and future news. Almost 30,000 seats of the 55,000 capacity stadium were filled on each day of the 2016 event, fantastically exceeding SRU forecasts.

“We can’t forget it’s a commercial enterprise,” Mr Low says. “Hopefully enough profit goes into a development fund so we’re not over-dependent on government grants. Singapore is already a global sporting city hosting the likes of Formula 1, women’s tennis and golf tournaments. The Rugby Sevens helps build content into the stadium. We can’t rely on hosting Madonna all the time!”

Ms Jean Ng, the Singapore Tourism Board’s sport director and former national netball captain, agrees. She says: “Partying fits well with its [rugby sevens’] image. It’s no magical formula, given what others have done with this space.”

“We want to make Singapore more than just a shopping destination. We need to diversify our experiences and provide visitors with a rolling pipeline of content.”

The real “jewel” welcoming the Sevens’ rugby return to Singapore is the Sports Hub, a 35-hectare recreational magnet, handy to the heart of the city. The facility caters to most pursuits and works on a user-pays basis, although the government offers subsidies, particularly through school and community activities. A fit society is seen by the government as a means to alleviate pressure on the health system.

The facilities at Kallang reflect this holistic sporting approach, says The New Zealand Herald report. A mall provides shopping and hospitality options, blocks of condominiums are within strolling distance, and transport arterials are close. The SportsHub’s piece de resistance is the National Stadium, an oasis for those seeking respite from 30C temperatures and 80 per cent humidity.

The complex, perhaps one of the most sparkling in Asia, can be sheltered by the world’s largest free-spanning dome, measuring 310m. The retractable roof repels sunshine or monsoon thunderstorms. The 8,000 sq m of Bermuda Celebration grass held firm against the rugby players’ thundering hooves. A bowl cooling system sees four chiller rooms underneath the stadium reduce the water supply to 8C, from which it is released through pipes, and subsequently vents, into targeted seating blocks.

However, nothing could cool the stadium when African underdogs Kenya delivered their inaugural tournament win after 17 seasons on the world circuit. The 30-7 rout of Fiji in the final was close to impossible, on form books.

The Kenyan ruckstars roared their victory dance to the heavens, the crowd roared their respect, and the audience’s appetite was whet for an evening of merriment at Clarke Quay.

That’s what Mr Low is now dreaming about. He’s not losing any top hairs over it. He wants to recreate the “Kallang Roar” and rewrite an equation that should keep Singapore in global rugby’s reckoning indefinitely.

Come on Singapore, let’s “ruck, rock and rumble” to bring a refreshing oval-ball version of the “Kallang Roar” to the Sports Hub.