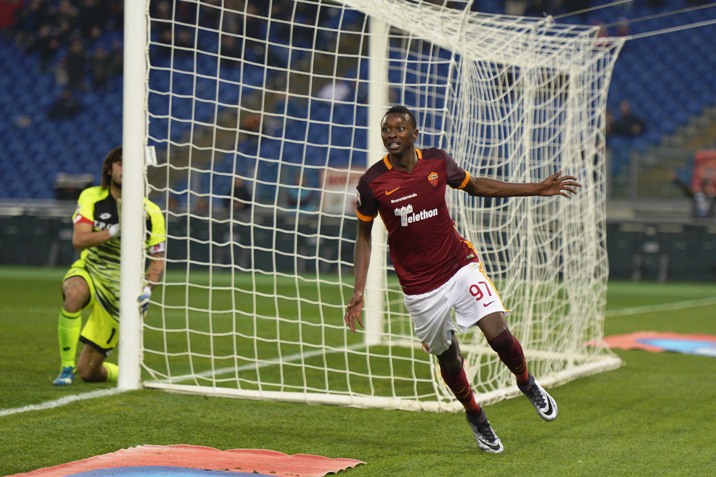 Nigerian starlet Umar Sadiq is in no hurry to step into goal-shy Edin Dzeko’s boots despite Roma hosting AC Milan Saturday in a clash that could decide the future of both teams’ coaches.

Sadiq, 18, has found the net in each of his last two appearances for Roma, coming off the bench to head home in a 2-0 win over Genoa last month and giving the Giallorossi the lead in a 3-3 draw away to Chievo on Wednesday.

That result left Roma in fifth place but Rudi Garcia’s men trail leaders Inter Milan by six points and the pressure is growing on the French coach — although he is not alone.

Milan handler Sinisa Mihajlovic could become the latest scapegoat for the long-standing malaise at the seven-time European champions following a 1-0 home defeat by Bologna in midweek, when Milan had 16 attempts on goal.

Sadiq, meanwhile, believes Roma can turn the corner with a win at the Stadio Olimpico but despite Dzeko struggling to find the net — he has scored only three league goals so far — the Nigerian has given the Bosnian his backing.

Asked if Dzeko should be worried for his starting place, Sadiq told asroma.it: “It’s important for a striker to score but I shouldn’t be looking at my goals or my games right now, I just need to keep working hard. I hope Edin will come back 100%.”

Promoted to Roma’s senior squad after scoring 14 times in 10 games for their youth team, Sadiq could earn his second start after Dzeko’s appeal to halve a two-match ban was rejected on Thursday.

Roma confirmed, however, winger Mohamed Salah could be available despite the speedy Egyptian hobbling off with a thigh knock against Chievo.

As Inter look to protect their one-point lead over Fiorentina and Napoli when they host Sassuolo on Sunday, Mihajlovic can only hope his misfiring strikers improve in a stadium he is all too familiar with having spent six seasons with Roma’s bitter rivals Lazio.

After Milan’s sixth reverse of the season on Wednesday, Mihajlovic hit out: “We weren’t unlucky, when you miss five one-on-one chances to beat the goalkeeper you risk conceding a goal at the end, and that’s what happened.

“We have to get back on track. We have to work hard and we will try and do well away at Roma.”

Fiorentina, who have scored a league-leading 36 goals thanks primarily to Nikola Kalinic (10) and Josip Ilicic (9), host a struggling Lazio on Saturday with the chance to go provisional top for the second time in a week.

Ilicic hit a brace midweek in a 3-1 win away to Palermo that sent La Viola top of the pile before Inter regained command thanks to a 1-0 win away to Empoli.

With hopes of a first title since 1969 growing in Florence, Fiorentina will be expected to prevail against a Lazio side still struggling amid a series of underwhelming performances by Manchester United target Felipe Anderson.

Lazio coach Stefano Pioli is still without key midfielder Lucas Biglia through injury, but it was the Brazilian’s compatriot, Anderson, who was the subject of Pioli’s ire after a lacklustre scoreless draw with Carpi in midweek.

“I believe he can do a lot more. I know it and he knows it,” Pioli told media after the game having substituted Anderson at half-time.

Thanks to the league-leading tally of Gonzalo Higuain (16 goals) and a solid contribution so far from Lorenzo Insigne (8), Napoli are also just one point off the pace.

Maurizio Sarri’s men travel to Frosinone looking to avoid a repeat of their scoreless draw with another promoted side, Carpi, earlier this season.

Juventus reinforced their bid for a record-equalling fifth title with a 3-0 rout of winless Verona in midweek and the champions, only three points adrift in fourth, are away to Sampdoria in Sunday’s late game.