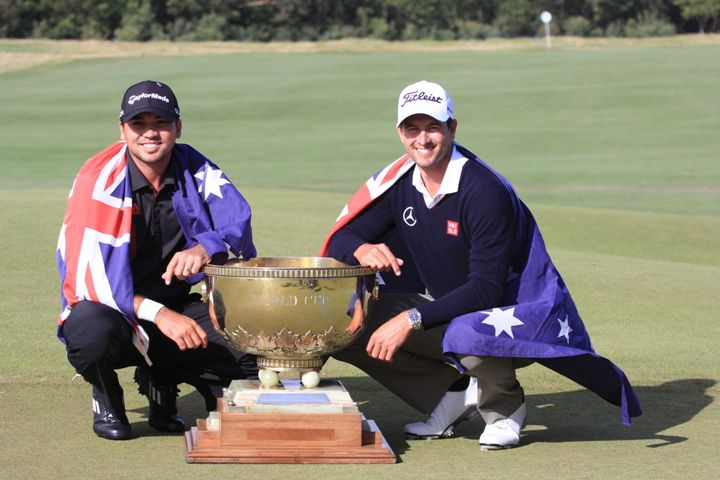 Tournament officials announced today that the 58th edition of the World Cup of Golf will be played at Kingston Heath Golf Club, with the format returning to team play (two-man teams) from 28 different countries squaring off from November 21 to 27 in Melbourne, Victoria, Australia.

One of the most historic global events in the game, the World Cup of Golf has been played 57 times in 25 countries and will carry an US$8 million purse with the first-place team splitting $2.56 million.

Kingston Heath is one of Australia’s best golf courses and consistently ranked among the top 50 courses in the world. The course is renowned for its natural charm and strategies created by its superbly crafted greens and bunkers.  The signature par-3 15th hole is one of the classic short holes in Australia, if not the world.

“The World Cup of Golf has a long and storied history as one of the true international events in our sport,” said PGA TOUR Commissioner Tim Finchem. “On behalf of the International Federation of PGA Tours, we are thrilled that a course with the reputation and standing such as Kingston Heath will serve as the tournament’s host venue in 2016.

The fans in the Sandbelt region of Australia are some of the best in the world and our players consider themselves extremely fortunate every time they are able to play in an event of this stature in the Melbourne area. Our thanks go out to the Victorian Government for their partnership in both the past and future events.”

Acting Minister for Tourism and Major Events for the State of Victoria, Philip Dalidakis said “We are thrilled to welcome the World Cup of Golf back to Melbourne’s magnificent Sandbelt. It’s another great addition to our outstanding major events calendar, which already contributes so much to Victoria’s economy. We look forward to welcoming the world’s best golfers and fans from around the globe to Melbourne in November.”

“We’re looking forward to the World Cup of Golf this November. We are thrilled that one of Australia’s truly great golf courses will host some of the world’s great players, showcasing our great game to Australia and the world,” said Brian Thorburn, Chief Executive Officer of PGA Tour of Australasia.

“We at Kingston Heath are delighted that the International Federation of PGA Tours and the International Golf Association are bringing the 2016 World Cup of Golf back to the Melbourne Sandbelt,” said Club Captain Peter Clark. “Our Club has a rich history of hosting major golfing events and we look forward to welcoming the world’s best players and modern day champions to The Heath in November.”

“The World Cup of Golf was started back in 1953 for the Goodwill of the sport,” said Jon Linen, Chairman of the International Golf Association. “It has become an iconic international event, carrying the torch for golf on a global scale. The event has had a long history of being contested in Melbourne, Australia, as the world’s best players rave about the courses, the atmosphere and the great fans in the Sandbelt region.”

The 2016 World Cup of Golf will mark the fifth time in the tournament’s history that it will be played in Australia and the first at any course other than Royal Melbourne.

The top 28 available players of different countries from the Official World Golf Ranking as of Monday, August 1, 2016(Monday after the PGA Championship) will choose their teammates for the competition. As the defending Individual Champion of the 2013 World Cup of Golf, Jason Day will qualify automatically as the top-ranked player for Australia. Day will be allowed to choose his partner.  All other of the top 28 players have until Thursday, August 12, 2016, to commit to play in the tournament. The deadline for each exempt player to select his partner is August 26.

“It’s great that the World Cup of Golf is going to Kingston Heath,” said defending champion and No. 2-ranked player in the world, Jason Day. “The course has tremendous tradition and it is one of the reasons that Melbourne’s Sandbelt is considered home to several of the world’s great golf courses.”

The World Cup of Golf Information

In 1953 when the inaugural Canada Cup and International Golf Championship—as the World Cup of Golf was then called—took place in Montreal, Canada, it was a relatively low-key event with just seven nations taking part. Since then it has grown into the greatest world team event in the game of golf, where teams of two players representing 28 countries compete for the prestigious title on some of the finest courses around the globe.

It was no coincidence that the first event was held in Montreal, for the Canada Cup and International Golf Championship was the brainchild of industrialist John Jay Hopkins, founder of Canadair. The trophy that will be presented to the winning team bears his name. Hopkins could justifiably be called the Founding Father of international golf. He believed deeply in golf’s potential to promote goodwill among all the nations in the world.

“Golf is a civilized and a civilizing game,” he once said. “It’s a game for good neighbors. It has the spice of good competition, while imposing the highest moral restraints.”

Hopkins’ devotion to golf led him to establish the International Golf Association in New York in 1952 with the mission of promoting, “International Goodwill Through Golf.”

“It is my hope that the International Tournament will serve through the spirit of the game to bind people together. The thousands, and hopefully, ultimately millions who watch these sportsmen must inevitably recognize the common bond that links all nations.”

The tournament became known as the World Cup of Golf in 1967.

More information will soon be made available with relation to ticket and hospitality sales.  Those interested for sponsorship related questions should e-mail WorldCupOfGolf@PGATOURHQ.COM.