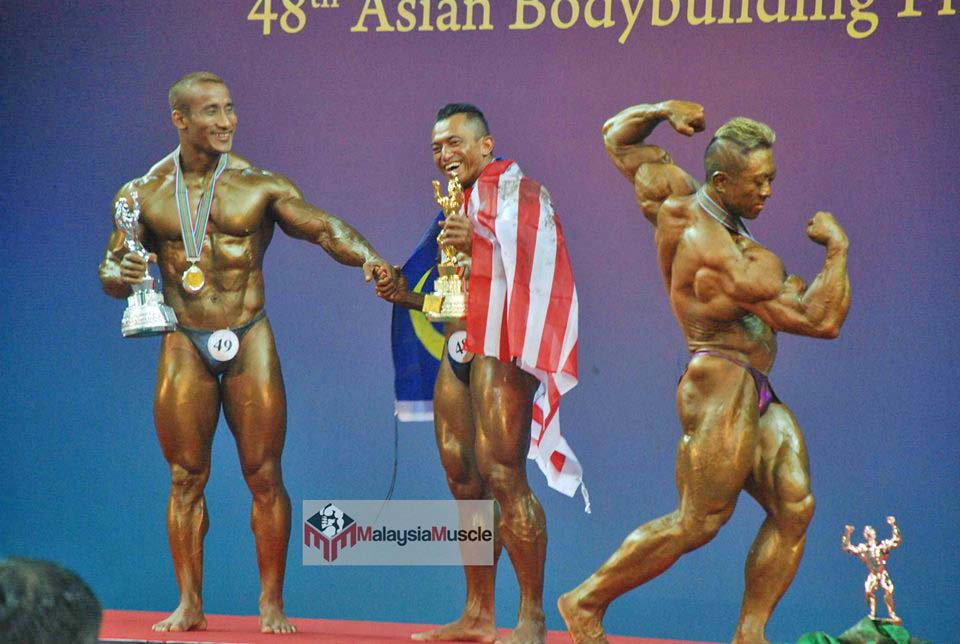 With his ninth Mr Asia title under his belt and eyes set on winning his 10th world title, Police Officer Sazali Samad drove home a strong message that age is no barrier to achieve success if one is disciplined, committed and dedicated coupled with pride.

At 46, the Batu Pahat born bodybuilder showed his class at the Asian Bodybuilding and Physique Championships in Macau on Sunday – on a day when Malaysians were celebrating the country’s 57th Merdeka.And fittingly Sazali said: “My win is a Merdeka gift for the country and people of Malaysia.”What makes Sazali’s triumph in Macau all the more special is that he achieved his feat in the 75kg category, his first attempt in in this category and was up against defending champion and three-time winner Boby Aramban Singh of India. He previously used to compete in the 70kg category.Sazali, a strict disciplinarian, won Mr Asia titles in 1996, 1998, 1999, 2000, 2004, 2009, 2010 and 2012.The Johorean is also a two-time National Sportsman of the Yea winner.Apart from Sazali’s win, Malaysia also had a winner in Buda Anchah in the men’s Master (41-50). Mohd Syahrul Azman and Meilaura Dora Jimmy won a bronze each in the men’s 170cm body physique category and women’s 49kg respectively.Another clear message driven home by Sazali’s achievement is that there is no internal bickering among the officials like you get in badminton, sepak takraw and even athletics.No accusing fingers are pointed or certain individuals made scapegoats during failures. Neither do you get bodybuilding officials jumping on the bandwagon of success to share and be part of the glory.Maybe other associations can take a cue from bodybuilding and put their house in order.To Sazali Samad and company we say SYABAS.