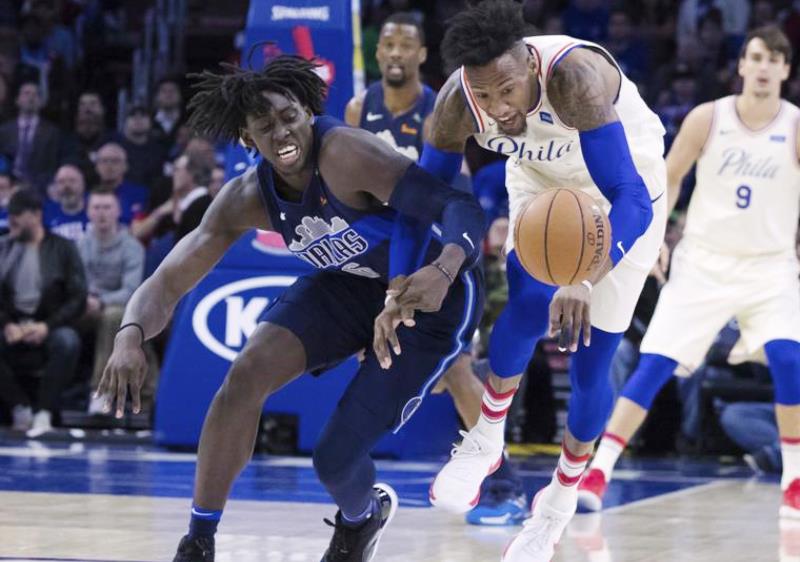 Ben Simmons scored 16 points as the Philadelphia 76ers routed the Dallas Mavericks to extend their winning streak to 14 games in the Eastern Conference playoff race on Sunday.

Australian star Simmons finished with nine assists and seven rebounds as the Sixers cruised to a 109-97 victory to move one win clear of the Cleveland Cavaliers in the standings.

The Sixers and the Cavs are locked in a duel for the third seed spot in the Eastern Conference playoff picture, with Philadelphia now at 50-30 for the season, ahead of Cleveland, who are fourth with 49-31.

Philadelphia are now assured of at least a top-four finish in the East after Sunday’s victory at the Wells Fargo Center.

The win also guarantees Philadelphia home court advantage for the start of the playoffs.

“Our season has been exceptional. The group has continued to improve and those things are that I will remember the most. There is a toughness to our group.”

With the injured Joel Embiid close to a return, the Sixers will enter the postseason brimming with confidence after another impressive win.

Simmons was one of five Sixers players to make double figures, with JJ Redick leading the scoring for the home team with 18 points.

Simmons was satisfied to reach 50 wins for the season, two years after the Sixers finished with a dismal 10-72 record at the foot of the Eastern Conference.

“It’s huge for the team,” Simmons said. “It shows how far we’ve come for the season.

“I think we’ve pushed through the tough times and I think we’re getting a lot better over time … it’s been very enjoyable. It’s better when you’re winning.”

Harrison Barnes led the scoring for the Mavs with 21 points, with Dennis Smith Jr adding 20 points and Dwight Powell 13.

In other games on Sunday, Donovan Mitchell scored 28 points to help the Utah Jazz clinch a playoff berth with a 112-97 win over the Los Angeles Lakers.

Mitchell also had nine rebounds and eight assists, and Joe Ingles had 22 points in the win. Jae Crowder came off the bench to score 18.

“It’s a great feeling to have that,” Mitchell said. “But at the same time, we got two more games left and want to stay where we’re at.”

Also, the Indiana Pacers are one game behind Cleveland after overpowering the Charlotte Hornets 123-117 on the road.

Domantas Sabonis led the scoring for the Pacers with 30 points from the bench, while Victor Oladipo had 27 points. The Pacers improved to 48-33 with the victory.

Elsewhere in the East, second-placed Boston suffered an upset 112-106 loss to bottom team Atlanta at the TD Garden.

It was a third defeat in four games for the Celtics, who are battling an injury crisis as they head into the playoffs.

The Celtics were rocked this week after it was confirmed star Kyrie Irving would miss the remainder of the season after complications from knee surgery. – Agence France-Presse