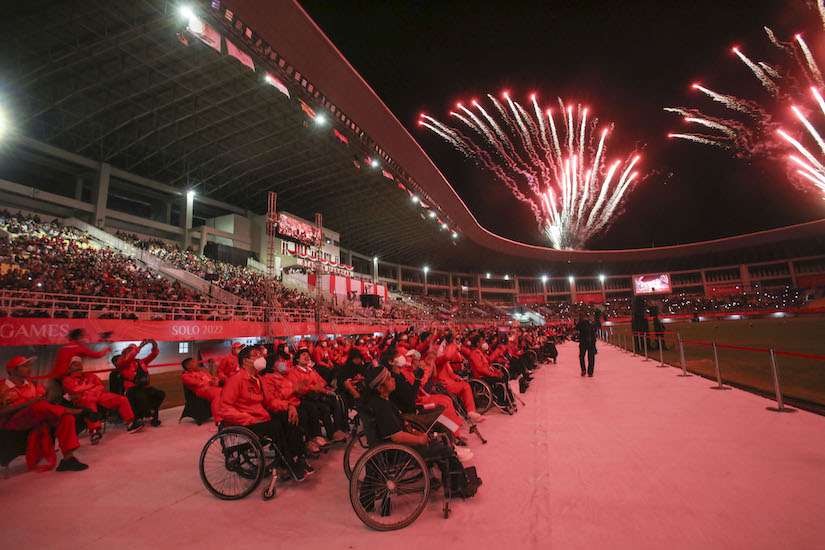 SOLO bids farewell to the 11th ASEAN Para Games 2022 in a glittering ceremony officially closed by the Republic of Indonesia President Joko Widodo at the Manahan Stadium here, tonight.

Thousands thronged the Stadium to join the colourful celebration in high spirits, marking the end of a seven-day para sporting extravaganza that saw Indonesia winning the overall crown with 175 gold, 144 silver and 106 bronzes.

It was also the first time since the last five editions of the Games that a host country emerged as the overall champion.

A total of 14 sports were contested with 1,260 medals offered to the 1,248 participating athletes and 659 officials in the Games which started on July 30.

Cambodia now gears up for its first-ever hosting job of the 12th ASEAN Para Games Cambodia 2023, scheduled in Phnom Penh from 3-9 June next year.

President Joko officially proclaimed the Games closed at exactly 8.01 pm local time, followed by the official Games flag handing over to the next host Cambodia.  His Excellency Hun Many, representing the Kingdom of Cambodia, received the flag from the ASEAN Para Sports Federation (APSF) President Maj Gen Osoth Bhavilai.

President Joko, in his speech, thanked all 11 contingents for their participation in the Solo Games, proof of the strong bond and solidarity amongst ASEAN member nations.

“Indonesia is proud to be the host of this Games…thank you athletes, thank you  to all contingents for making this a successful Games,” said President Jokowi, who also expressed his thanks to all related parties and stake holders including APSF, NPCs and International Sports Federations (IFs).

“Congratulations Indonesia! For the past week, we have witnessed an exciting show of courage. Great determination. To athletes, you are all winners!  ASEAN salutes you!” he said.

Indonesia’s achievement of 175  gold surpassed its target of hitting 104 gold with the majority of the haul coming from athletics, which contributed 57 gold, 41 silver and 24 bronze.

Closest rival Thailand had to play second fiddle this time around after coming in second with 117 gold, 113 silver and 88 bronze.

Thailand however maintains its record with the most titles (6) after eleven editions while Indonesia has now won three times in 2014 (Myanmar), 2017 (Kuala Lumpur) and 2022 in Solo. Malaysia won their only title in the inaugural Games in Kuala Lumpur in 2001.  The 10th Asean Para Games in Manila in 2020 was cancelled due to the pandemic.

Meanwhile, Vietnam, the original host of the 11th ASEAN Para Games, ended their campaign in the top three bracket with 65 gold medals with Malaysia following on fourth spot with 36-20-30 medals achievement.

Singapore came in eight with 7 gold, 9 silvers and 11 bronze medals followed by Timor Leste with five gold to show, Brunei 1 gold and three silvers while Laos picked up two gold and 7 bronzes.