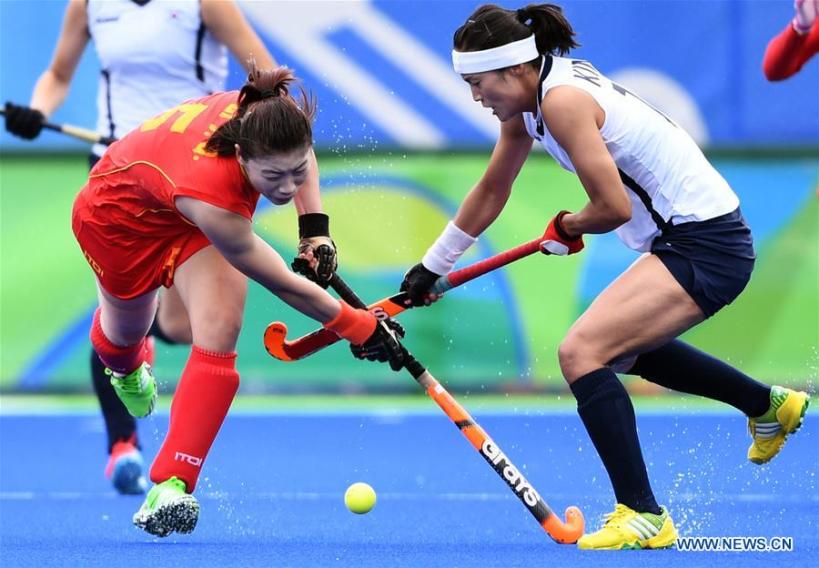 Two crucial Pool A matches took place on day seven of the Rio 2016 Olympic hockey competitions, with New Zealand getting the point that they needed to guarantee their place in the Quarter-Finals.
The opening match of the day saw China (FIH Hero World Ranking: 6) and Korea (WR: 8) play out a 0-0 draw, a result which ended Korean hopes of reaching the knock-out stages. Korea have only managed to claim one point from their four matches played so far, leaving them four points adrift of the fourth-placed Chinese with only one match, and three points, remaining.
The draw was not ideal for China either, who went into the match knowing that a win would have sealed their place in the Quarter-Finals but must now fight another day.
At the other end of the table, reigning Olympic and World champions the Netherlands (WR: 1) were held to a 1-1 draw by New Zealand (WR: 4), a result which leaves the Dutch three points clear at the top and moves the Black Sticks into second place in the Pool B standings.
Both captains were on target for their respective sides, with New Zealand’s Kayla Whitelock firing home a late field goal to rescue a point after Maartje Paumen had given the Dutch the lead two minutes before half time.
Speaking after the match, New Zealand Head Coach Mark Hager said: “The first quarter we were pretty evenly matched, but I thought we outplayed them in the second half and were probably a bit disappointed not to get the win. It’s pleasing to come away with a draw and Kayla really stepped up as we know she can.

The point guarantees us a spot in the Quarter-Finals so we’re happy with that.”

The final round of matches in both Pool A and Pool B will be played on Saturday, with the results determining the line-ups for the Quarter-Finals.

In Pool A, the Netherlands take on a Germany (WR: 9) side that currently sits three points behind them in the standings. However, such is the Dutch advantage in terms of goal-difference that even a defeat is unlikely to deny them sealing top spot. A first place finish for the Netherlands would see them play the team that finished fourth in Pool B.
That said, a win for Die Danas could see them move into second position in the Pool A standings, although they will be relying on New Zealand, who currently sit second thanks to a marginally superior goal-difference over Germany, to slip up in their final pool match against fourth-placed China, which takes place at the end of the day.
With China’s place in the last eight not yet guaranteed, Quarter-Final hopefuls Spain (WR: 14) will be looking to increase the pressure on the Asian giants by defeating the now eliminated Korea. A victory for the Red Sticks would move them ahead of China in the standings, meaning that China would then need to claim at least a point against the Black Sticks in order to reach the knock-out stages.
In Pool B, USA and Great Britain will meet to decide who takes top spot and sets up a meeting with the team that finishes fourth in Pool A. However, the first match of the day has the most riding on it, with fourth-placed Argentina taking on India, who sit two points further back in fifth.
Argentina, who claimed the Hockey Champions Trophy title less than two months ago, have been out of sorts in Rio, losing three of their four matches to leave their gold medal ambitions hanging in the balance. A fourth loss would end the Argentine dream and put India’s Eves into the Quarter-Finals, but a point would be enough to see Las Leonas into the knock-out stages, where absolutely anything can happen.
The final Pool B match of the day sees Australia facing Japan, with the Hockeyroos looking to make it three wins on the bounce and seal a third place finish in the pool.
Complete information about the hockey competitions at the Rio 2016 Olympic Games can be found on the official website: rio2016.com/en/hockey
The Olympic hockey events take place from 6-19 August at Rio’s purpose-built Deodoro Olympic Park, and will feature the 12 men’s and 12 women’s international teams that qualified through the Hockey World League and Continental Championships.
Tickets for both events are still available and can be purchased here

Pool A
Korea 0, China 0; New Zealand 1, Netherlands 1.
Pool B
No matches played
Standings overview
To see the detailed standings, click here.
(click ‘preliminary round’, and then ‘view rank’)
The top four finishers in each pool will qualify for the Quarter-Finals