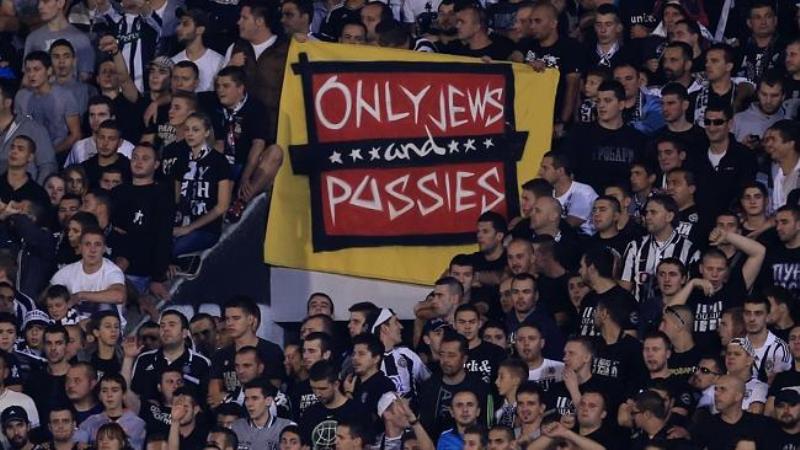 A huge banner bearing the words “Only Jews and Pussies” was displayed throughout Thursday’s Europa League match between the two teams in the Serbian capital.

“I didn’t see but the club is aware. And if it is true, that it is very disrespectful,” Pochettino told the British media after the game which ended in a 0-0 draw.

“It is a shame as it was a great atmosphere. It is very disrespectful, unacceptable and a massive problem for us.”

Partizan were kicked out of the UEFA Cup in 2007 for hooligan-related problems and the club is certain to face more sanctions following Thursday’s incident.

On the pitch, Tottenham, in their fourth Europa League campaign, made no fewer than 10 changes from the side that drew with Sunderland in the Premier League at the weekend, with goalkeeper Hugo Lloris the only survivor.

Harry Kane almost gave the north Londoners a dream start to their bid to get out of Group C, his first minute attempt hitting the bar.

But despite looking dangerous on occasions Tottenham lacked the killer touch and were unable to find a way through Partizan’s defence.

Everton marked their first appearance in Europe since the 2009/2010 season with a 4-1 win over Wolfsburg.

The Merseysiders were ahead after just 15 minutes at Goodison Park when Ricardo Rodriguez put through his own goal after deflecting a Steven Naismith shot before a close-range header from Seamus Coleman made it 2-0 on the stroke of half-time.

Leighton Baines added the third from the penalty spot two minutes after the break with Kevin Mirallas firing home a smart fourth two minutes from time after a fine pass from substitute Samuel Eto’o.

Rodriguez grabbed a consolation for Wolfsburg with a curled free-kick past Tim Howard in the Everton goal in injury time.

The English side top H after rivals Lille and Krasnodar drew 1-1 in France.

Scottish champions Celtic came away from their trip to 1994 finalists Salzburg with an entertaining 2-2 Group D stalemate.

Ghanaian winger Wakaso Mubarak put Celtic in the lead in the first quarter of an hour in Austria on his loan debut.

Brazilian striker Alan then levelled for the home side, his 35th minute shot deflected off defender Efe Ambrose.

After the restart, Gordon produced a superb double save to keep Salzburg at bay again.

Scott Brown put the Scots back in front on the hour, his 30-yard screamer helped on its way by Andre Ramalho’s leg.

With 12 minutes left, Salzburg captain Jonatan Soriano earned the Austrians a share of the points with a brilliant freekick, which flew over the wall and into the top corner of Gordon’s net.

Celtic boss Ronny Deila said: “It was a good result against a very good team. We worked better as a team today and stood the distance better.”

In the other game in Celtic’s group, on-loan Manchester United forward Angelo Henriquez was among the scorers as Dinamo Zagreb routed Astra Giurgiu of Romania 5-1.

Defending champions Sevilla enjoyed a 2-0 win over Feyenoord thanks to first-half strikes from Grzegorz Krychowiak and Stephane Mbia.

There were also three impressive wins for Italian clubs with Inter Milan claiming a 1-0 victory at Dnipropetrovsk, Napoli cruising 3-1 past Sparta Prague and Fiorentina claiming a 3-1 home win against Guingamp.

For the first time this season’s Europa League winners get a Champions League spot.

This is the first match-day of the round-robin phase with the top two from each of the 12 groups of four qualifying for the knock-out phase, where they are joined by the third-placed teams from the group phase of the Champions League. – Agence France-Presse