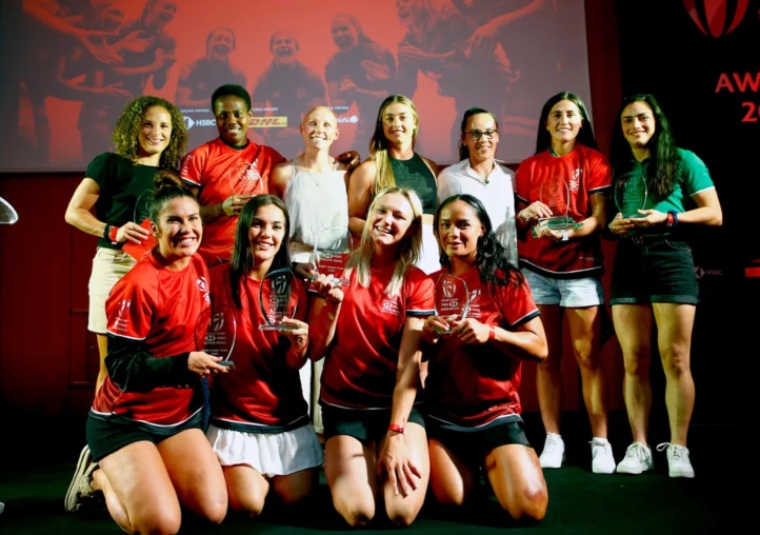 The ceremony was held at the Centre des Congrès in Toulouse, France on Sunday evening following the final round of the women’s 2022 Series in Toulouse. The awards recognise and celebrate the players and teams who have performed at the highest level across the 2022 Series.

Having already been crowned champions in Langford earlier this month before finishing second in Toulouse, Australian players are heavily represented among the winners with a presence in four categories.

Aside from the Women’s Try of the Series, which was voted for by fans on social media, winners have been selected by the World Rugby Sevens Series Awards panel, comprising former international sevens players and Series commentators, across the eight women’s categories.

This award goes to a player who has made their HSBC World Rugby Sevens Series debut in the current season.  All three nominees had graced the Tokyo 2020 Olympic Games before making their Series debut and continued that form into the Series, helping their teams create history along the way.

The Fair Play Award is selected by the match officials and recognises the team who showcase rugby’s values of integrity, passion, solidarity, discipline and respect. This year’s recipient was Canada.

Amee-Leigh Murphy Crowe (IRE) was voted by rugby fans worldwide as the Try of the Series for her try against USA in Langford. The other nominees were Portia Woodman (NZL) for her historic 200th Series try v Canada in Langford and Lily Dick (AUS) for her winning try in Cup final v New Zealand in Langford.

This award is given to the player or team who has shown the ability to perform under the unique and intense pressure of top-level rugby sevens. This award was voted for by the panel and went to Australia’s Lily Dick for her last-gasp winning try against New Zealand in the Langford Cup final.

The other nominees were Ireland’s Amee-Leigh Murphy Crowe for her try against USA in the Langford quarter-final and Brazil’s recovery from 19-7 down at half-time against Great Britain in round two in Dubai to win their ninth-place play-off 26-24.

This award is for the player who demonstrated the most consistency and delivered the greatest impact against four key criteria – carries, offloads, line-breaks and tackles.

This year’s winner was Australia’s Charlotte Caslick, who made 85 tackles, 27 breaks, 38 offloads and 159 carries throughout the season.

Capgemini Leaders of the Series – Powered by the Momentum Tracker: Ireland

This award celebrates the team that has upped its performance and climbed the rankings throughout the season. Results have been tracked throughout all the rounds, and Ireland have ranked first of the Series.

Exclusive interviews with award winners will be broadcast across World Rugby digital channels.

World Rugby Chairman Sir Bill Beaumont said: “On behalf of World Rugby, I would like to congratulate all HSBC World Rugby Sevens Series 2022 award winners. The 2022 Series was another spectacular reminder of why rugby sevens is a truly unique and thrilling sport, growing in popularity around the globe. Its speed, skill and incredible tries are capturing the hearts of fans worldwide and inspiring young girls around the world to pick up the oval ball. With a very exciting Rugby World Cup Sevens in Cape Town in September and the Paris 2024 Olympic Games just two years away, the future is bright for rugby sevens.”

The awards ceremony for the men’s Series will be held in Los Angeles after the final round on 27-28 August and the World Rugby Sevens Player of the Year Award (men and women) will be presented at the annual World Rugby Awards ceremony in November 2022. – WORLD RUGBY