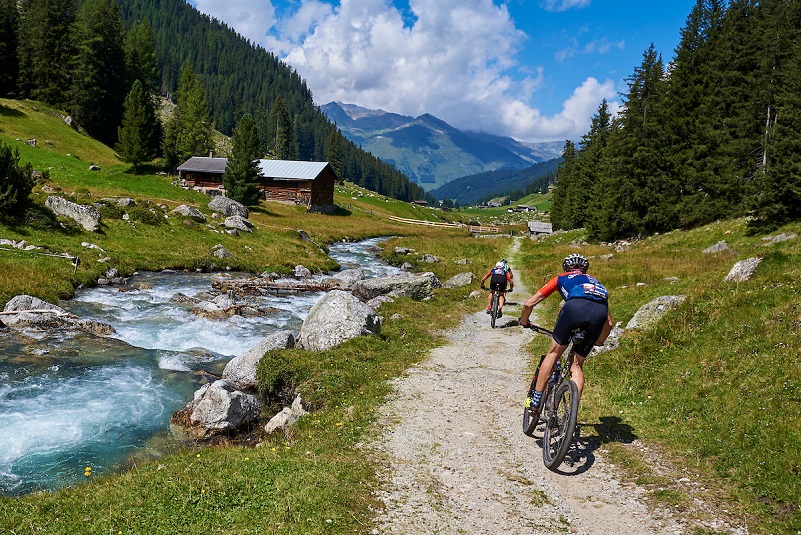 The Queen Stage of the 2021 Swiss Epic, in Graubünden, held no demons for Nicola Rohrbach, Lukas Flückiger, Ariane Lüthi and Robyn de Groot.

Both the Goldwurst Power-Infinity and the Gabriel Technologie teams cruised to stage honours, further extending their general classification leads.

Not even the massive Scaletta Pass, which tops out at 2 606 metres above sea level, could prevent a repeat of the opening two stages’ results.

In the men’s race; the opening 35-kilometres, of the 75-kilometre-long stage, saw cagey tactics. A large group of 10 teams shadow boxed over Alp Laret and across the valley trails.

It was only on the FOCUSWATER Flow Section, through Val Traupchun, that Rohrbach and Flückiger managed to slip off the front.

“We felt pretty good again” Flückiger said, downplaying his and Rohrbach’ dominance. “It was really fast at the start of the stage, because we went all the way from St. Moritz down the Engadin valley before turning left up, towards, the Scaletta Pass. It was really, really hard on the Pass. I mean the summit is at 2 600 metres and there wasn’t enough air for everybody. The sun was baking down too, even though the temperature wasn’t that hot we were still sweating like crazy in the sun.”

Flückiger concluded: “Yeah, we’re really happy to have won our third stage in a row.”

His partner Rohrbach added: “Now we’re looking forward to the next to days in Davos.”

Their third stage win, in as many days, was completed in a time of 3 hours, 24 minutes and 44 seconds. Buff Scott MTB Racing’s Hans Becking and Francesc Guerra Carretero were second, just 56 seconds back.

While Konny Looser and Sören Nissen were third, a second under 3 minutes behind
the stage winners. Goldwurst Power- Infinity thus lead the Dutch/Spanish Buff Scott combination by 6 minutes and 36 seconds on the general classification.

STOLL & Stevens Racing round out the podium, 12 minutes and 57 seconds down.

In the women’s race Gabriel Technologie also made it three-from-three. Lüthi and De Groot once again rode conservatively in the first half of the stage before putting the hammer down on the Scaletta Pass climb.

The Swiss/South African pairing appear to be in a class apart and only misfortune stands between them and the 2021 Swiss Epic title.

“Today, the first four teams were actually together for a long time” Lüthi explained. “On a
singletrack climb I managed to get a little gap, which Robyn [de Groot] managed to bridge across on her own. That gave us a little advantage over the second placed team, of Adelheid Morath and Angelika Tazreiter. With that gap we started climbing the Scaletta Pass and from the summit we just focused on descending safely in order to take the stage win.”

Lüthi and De Groot’s winning time was 4 hours, 16 minutes and 34 seconds. The Davos Klosters Women were second, 7 minutes and 8 seconds back, while Olympia – Rdr Italy Team were third.

Gabriel Technologie’s grip on the women’s orange leader jerseys is now a significant 12 minutes and 13 seconds over Morath and Tazreiter. Costanza Fasolis and Claudia Peretti are third, at 22 minutes and 5 seconds behind Lüthi and De Groot.

The final two days of the 2021 Swiss Epic will see the race explore the trails around Davos. Known by the moniker “Singletrack Paradise Davos” even two days is hard enough to explore the region in full.

Stage 4 features a 66-kilometre-long route, which takes in highlights like the Selfranga and Spärra Trails, as well as the climbs to Monbleler Forest and the Gotschnaboden.

Mountain biking fans can view much of the best of the course by following the action live.

Visit www.swiss-epic.com or the race’s social media handles to watch the race unfold on the beautiful trails of Davos.